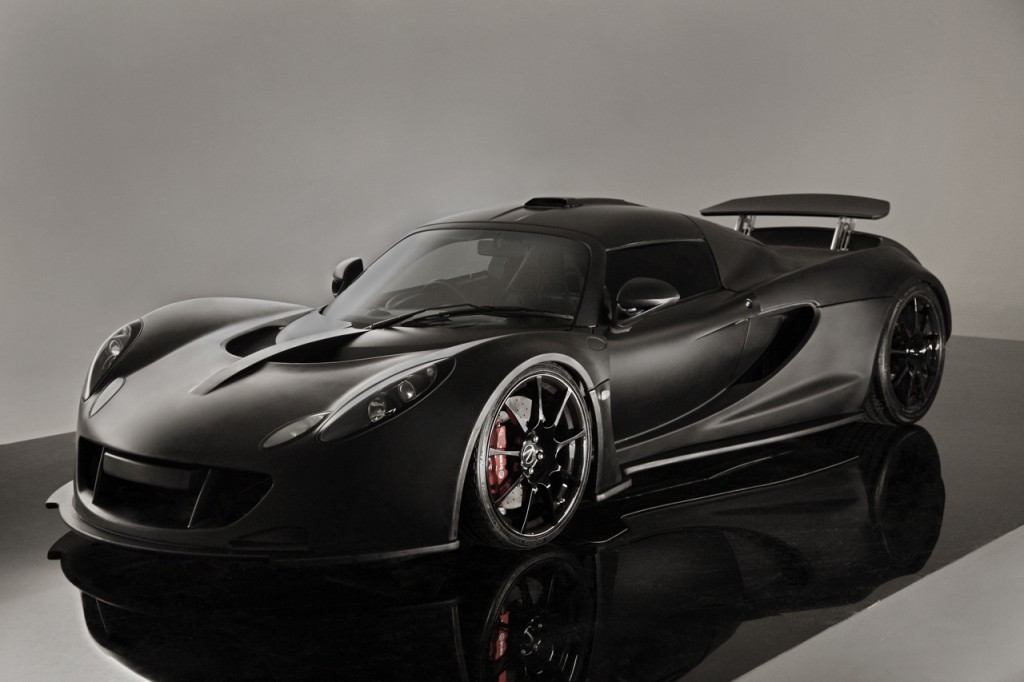 Usually when a car is either named after a deadly snake or a snake’s venom, it means that it is nothing to play around with because it means business. That’s just what the 2011 Hennessey Venom GT is all about, some serious business when it comes to performance.

The Hennessey Venom GT has been around for some time now on paper and has finally come very close to physical conception.

The Hennessey Venom GT is based on the Lotus Elise replacing the powerplant with a Corvette ZR1 supercharged V-8 engine cranking out 725 horsepower. This is a recipe for one of the fastest cars that you will see on the street. Performance estimates so far will put the Venom GT at the head of its class with a 0-60mph time of 2.4 seconds, 0-100mph at 5.3 seconds and a top speed of 262mph. Bugatti Veyron What?

The 2400lb body will also include a Ricardo six-speed sequential transmission turning the rear wheels with Brembo brakes clamping down on 15 inch carbon ceramic rotors. Production of the Hennessey Venom GT will be limited at 10 units each year with available 1000hp and 1200hp versions. So far Hennessey has plans for selling the Venom GT in the Middle East, Russia, Europe, Asia and Australia.

SEALY, TEXAS & SILVERSTONE, ENGLAND, March 29, 2010 – Hennessey Performance is pleased to introduce the first official images of its Venom GT supercar. Based upon the Lotus Elise, the Venom GT combines a high-tech, lightweight British chassis with a powerful American V8.

“This is not the first time that Britain and America have joined forces to produce a weapon of mass propulsion”, said company founder and president, John Hennessey. “Over fifty years ago the American-built P-51 Mustang fighter aircraft was flown into history powered by a British Rolls-Royce Merlin engine. Today the Hennessey Venom GT promises to set a new standard of power to weight ratio in the rarefied air of today’s supercar market.”

SOMETIMES LESS EQUALS MORE
In the case of the Venom GT, less weight means more performance. The Venom GT will have a production curb weight of less than 2,400 lbs (1,071 kilos) aided by its lightweight carbon fiber bodywork and carbon fiber wheels. Stopping power is delivered via Brembo brakes with 6-piston calipers up front and 4-piston calipers in rear clamping down on 15-inch carbon ceramic rotors.

SOMETIMES MORE EQUALS MORE
The Venom GT’s base power plant is the supercharged 6.2 liter LS9 V8 (the same as in the Corvette ZR1) tweaked by Hennessey to 725 bhp. The company will also be offering 1000 bhp and 1200 bhp twin turbo V8 engine variants. The mid-engine V8 will transmit its power to the rear tires via a Ricardo 6-speed gearbox.

POWER WITH CONTROL
Hennessey plans to manage power output by using a programmable traction control system. CFD (computational fluid dynamic) tested bodywork and down force will also help keep the Venom stable at speed. An active aero system with adjustable rear wing will deploy under varying conditions on both the road and racetrack. An adjustable suspension system will allow ride height adjustments according to speed and driving conditions. Finally, power will be put to the ground via massive Michelin PS2 tires.

POWERED BY THE USA, BUILT IN THE UK
Hennessey will be building the power plants at its Texas facility. The engines will then be air freighted to the company’s assembly facility near Silverstone, England where the Venom GT is built and tested. Venom GT buyer will be offered a 1-day driver orientation and instruction program by a Hennessey factory test driver, at a track in the UK or USA prior to delivery.

LIMITED PRODUCTION
The company plans to establish a network of Venom GT dealers and distributors in the Middle East, Europe, Russia, Australia and Asia. Production is limited to just 10 vehicles per year and the company already has orders for 4 Venom GT’s.