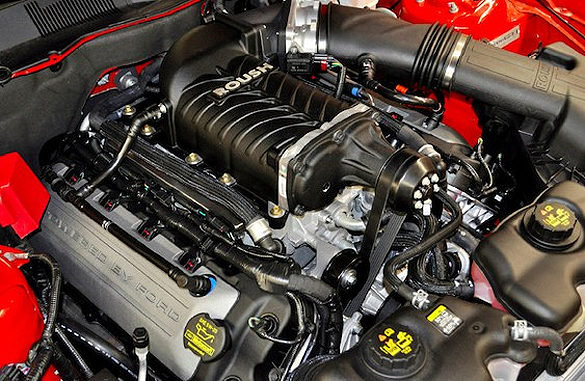 The new 2011 Ford Mustang GT 5.0 is already a performance marvel that can be had for a decent price. For about $6,000 more you can take the new Mustang GT 5.0 to a level above the GT500 with Roush’s new Tuner Kit (part # 421140) which is essentially a new bolt-on supercharger kit. The kit boosts power output to about 550hp and 470 lb-ft of torque on pump gas. Currently by adding the kit it will not retain your factory warranty. Those who wish to wait until fall for the Roush kit will be able to keep the current factory warranty intact while Roush will offer a 90-day parts warranty on the supercharger components.

LIVONIA, Mich. (August 26, 2010) – Since the day Ford announced the new 5.0L engine for the 2011 Mustang, people have been asking, “What is ROUSH® going to do with that engine? When will the ROUSHcharger® be available?”

The answer to those questions is finally available. ROUSH has engineered a 5.0L ROUSHcharger Tuner Kit that can boost the horsepower on the 2011 Mustang upwards of 550 horsepower on stock pump gasoline with more than 470 lb.-ft. of torque. This 5.0L ROUSHcharger Tuner Kit (part number 421140) has a suggested retail price of $5,999.00 and is available for shipment now.

Many people got their first look at the 5.0L ROUSHcharger in the ROUSH display at Mustang Alley during the Woodward Dream Cruise. The display car got many double takes as people walked by, looked, and then realized that car was, in fact, a 2011 Mustang with a ROUSHcharger installed.

Based on the popular TVS2300 ROUSHcharger, the 5.0L ROUSHcharger Tuner Kit comes with a 90mm pulley and generates an estimated seven pounds of boost. Included in the kit are 47 lb. fuel injectors, high-flow fuel rails, a high-flow ROUSH air lid, and a twin 60mm throttle body. The heavy-duty ROUSH tensioner is included for the first FEAD belt.

This Tuner Kit includes a 90-day parts warranty, but does not come with a calibration or maintain the Ford factory engine warranty. Professional tuning and installation is recommended.

“While the new Ford five-liter engine offers amazing performance right from the factory, and the new ROUSHcharger will kick it up a level,” said Jack Roush, motorsports legend and chairman of ROUSH Enterprises. “Our engineering team has worked hard to deliver a product that will satisfy the demands of the ROUSH customer on an extremely tight deadline, and they have come up with another great solution for a powertrain upgrade.”

Orders for the 5.0L ROUSHcharger Tuner Kit are now being accepted by calling 1-800-59-ROUSH. Information can be found online at www.ROUSHperformance.com.

There will be a 5.0L ROUSHcharger Kit available this fall that will come complete with a ROUSH calibration and full warranty. Pricing and details to come.