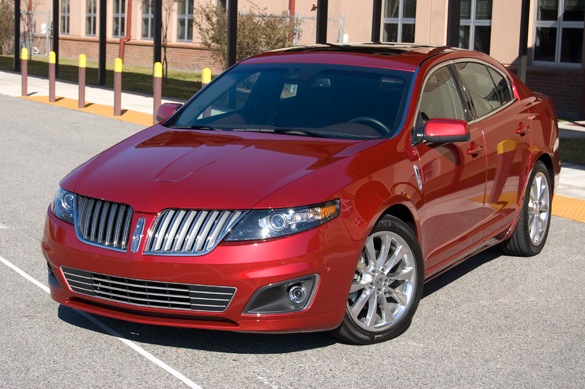 Lately Ford’s luxury division is not getting as much front-page exposure as the company’s latest redesigned vehicles. Nevertheless, Lincoln should in no way be overlooked.  Ford ingenuity and survival skills have trickled down into vehicles such as the new Lincoln MKS luxury sports sedan.

The new 2011 Lincoln MKS is not just a redone or rebadged Taurus. It is much more and it is ready to battle with any car in its class. If the American car companies have learned anything over the past decade it is that the old rebadging notion will only result in possible bankruptcy. Fortunately for Ford they were able to keep things moving without the assistance from the government.  The reasons why really show in not only the Ford lineup but also in the Lincoln division, especially when it comes to cars such as the new MKS.

Ever since Ford decided to dissolve Mercury, the Lincoln name now stands out a bit stronger. One of the strong standing cars for 2011 is the Lincoln MKS. The MKS, with its original look, is a stunningly beautiful car in my opinion. From the front elongated grill mimicking other current Lincoln models to the stylish tall tail-lamps that give the MKS a classy look, the MKS is something “different” to look at. 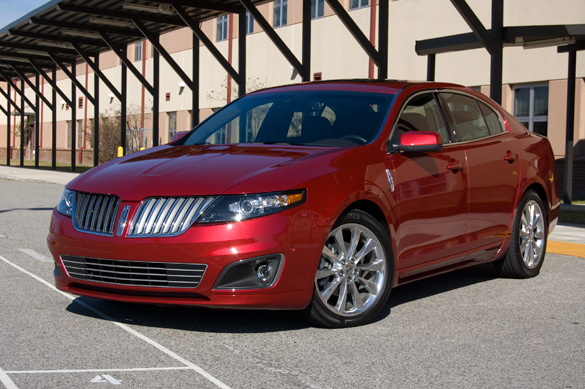 During my time in the new MKS I received several complements about the styling. People would act as if they have not seen a Lincoln that looked this good in a long time. Although that may actually be the case for some, the MKS is undoubtedly one of the better-looking luxury sports sedans on the road if you can get used to the uniquely styled front grill. Everything on the exterior flows well, even the 20-inch polished silver wheels. The MKS has a tall roofline. This is something I noticed while parked next to a BMW X3 because the MKS was just as tall. This can also be said about the current Ford Taurus because the MKS shares the same platform.

Inside the new MKS you will find a plush interior that has a bit of excitement. It is too often that you find interiors that are lost in translation because everything is the same color. Not so with the new MKS. The perforated and climate controlled leather seating areas are a shade different from the floors. The instrumentation is brightly lit and relatively easy to operate. Ford’s new SYNC system is nicely integrated into vehicle controls and functions allowing the driver to seamlessly change the settings of a specific item with the push of a button and a voice command. 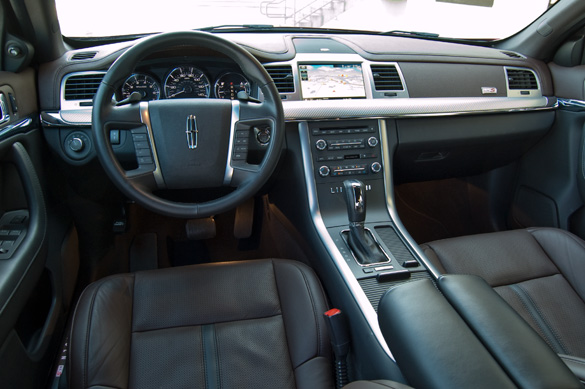 It is a common trend to see new luxury cars with all types of high-tech gadgetry but it seems to be a difficult task to make it easy for the driver to operate everything and drive at the same time. This is where the SYNC system, developed in part with Microsoft, really shines. Finding a location and having the GPS navigation system direct you to it is almost as easy as asking for directions from the local Andy Taylor in the town of Mayberry. Ford has developed an industry leading navigation system integrated into a well-thought-out voice activated vehicle control system. 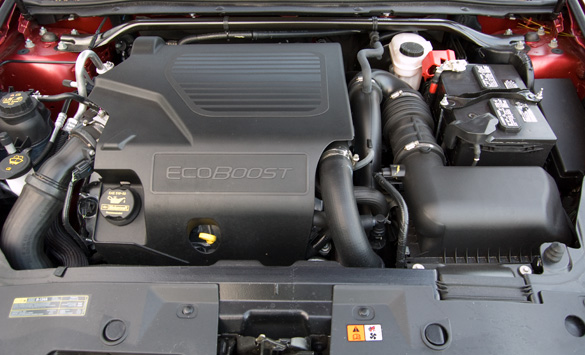 In the area of performance, the 2011 Lincoln MKS EcoBoost has V8 power written all over it, with the fuel economy of a V6. The MKS EcoBoost is equipped with a 355 horsepower and 350 foot-pounds of torque 3.5-liter EcoBoost (twin-turbocharged) direct-injection V6 engine. You would never know the engine is forced induction because it has virtually no turbo lag. Torque comes on early and carries through the lower RPM power band. Fuel economy figures during my drive around town in rush-hour traffic came in around 19mpg. On the highway where I really stretched the EcoBoost’s legs the gas mileage figure averaged 24mpg which was 1mpg short of the EPA figure of 25mpg highway. EPA figures for city driving in the MKS EcoBoost is listed as 16mpg.

All-wheel-drive is a very commonplace feature among new luxury vehicles including luxury sports sedans such as the MKS. My 2011 MKS EcoBoost model was equipped with an all-wheel-drive system that really helped in the area of keeping the MKS planted when accelerating in a turn. However, the MKS did suffer from an extensive amount of torque steer under heavy acceleration. Those of you who like to keep a light touch on the steering wheel or even those who may turn the wheel with a couple of fingers, may want to consider a tighter grip on the MKS’s leather wrapped steering wheel. 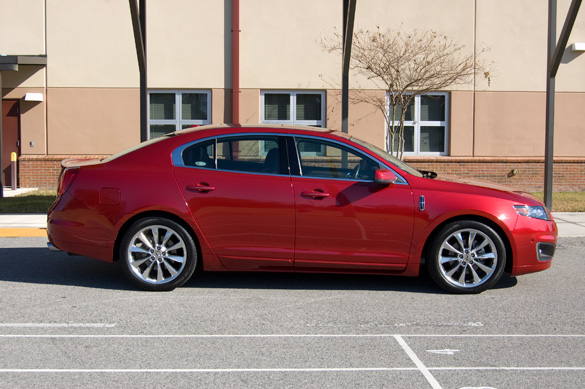 The MKS EcoBoost suffered from a lack of lateral stability. During my drive of the MKS I literally pushed it to the limit.  In a few turns, I found ‘that limit’ and very quickly with the stability control kicking in to keep the car from wavering. In other words, the new 2011 MKS lacks the ability of getting down and dirty in the twisties in terms of performance. The new MKS is more of a luxury car than sports sedan. Best of all you can take advantage of the 355 ponies and 350 foot-pounds of torque. I have to admit, it puts a smile on your face.

Technology is a major part of our lives and any new car that you buy for a reasonable price is surly to surprise you with some type of hidden feature. One feature on my MKS EcoBoost test vehicle was the Active Park Assist system that somehow I would always overlook when I encountered a parallel parking spot. I did however get to try the system out and it surprisingly worked with ease. With the push of one button and reading the digital LCD information display for the next step, I found myself slightly misaligned in a parallel parking spot in a matter of 25 seconds. I was in the spot, but slightly crooked. I am sure this was due to me quickly releasing the brake pedal, which is what’s required, to enter the spot. The Active Park Assist did all of the steering action for me. 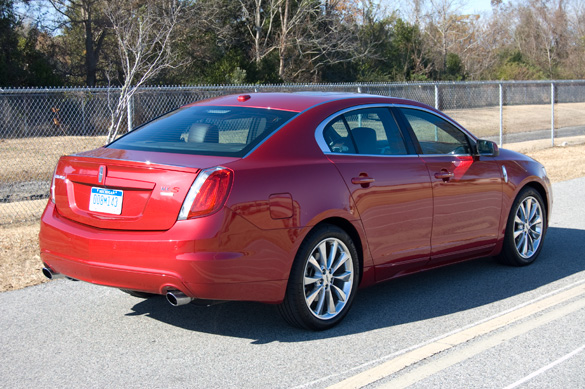 Another intuitive feature on the MKS that ‘surprised’ me was is the collision warning system. This alerts you with a string of red LEDs on the dash and a series of audible beeps in the event where you are approaching a vehicle or object too fast. Luckily for me I was paying attention to what was in front of me when the system went off and I did not experience the airbag feature. The collision warning system comes as part of the radar cruise control which also works beautifully allowing me to trail a slower vehicle in front of me at speed and then resume my pre-set speed after the slower car has moved from in front. The system will also apply braking when it detects the vehicle in front starting to slow. Unlike some radar cruise control systems, the one found in Ford and Lincoln vehicles will not bring you to a complete stop but will alert the driver to interact when a certain slow speed is reached.

The Lincoln MKS EcoBoost audio system is THX certified with a total of 5.1 channels for true theater-like surround sound. Simply put, it sounds amazing. Lincoln did a great job with sound insulation and the proof is in virtually no distortion or abnormal vibrations at full volume levels. Bluetooth audio streaming also works seamlessly by easily connecting to my iPhone and allowing me to seek through my tracks with the steering wheel mounted controls. Magnificent! 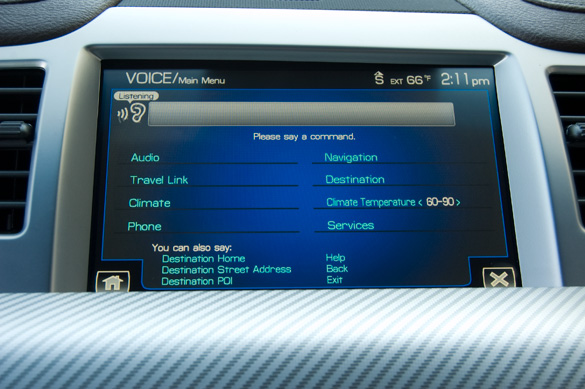 I have to admit that I believe the MKS is targeted for a certain demographic but still aims to please the pickiest buyer looking value in an American luxury sports sedan. A 2011 Lincoln MKS front-wheel-drive model equipped with the base 3.7-liter 270 horsepower V6 starts at $41,270. The price of my 2011 Lincoln MKS EcoBoost AWD test vehicle came in at $57,805 which is still several thousand less than a comparably equipped BMW 550 or even a Mercedes-Benz E350. The MKS’s price point is still on target, maybe slightly more, for its American competitors such as the Cadillac CTS AWD model. My MKS EcoBoost was equipped with over 8 grand in options including the larger 20-inch aluminum wheels, Active Park Assist, Adaptive Cruise Control, Dual panel moonroof, THX-Certified 5.1 audio system, and voice activated navigation. 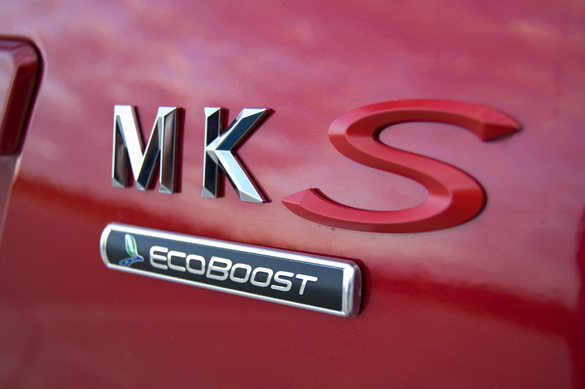 If you are in the market for a luxury sports sedan, take a look at the new 2011 Lincoln MKS EcoBoost.  It has its own stylistic character, handled in a slightly economical way.