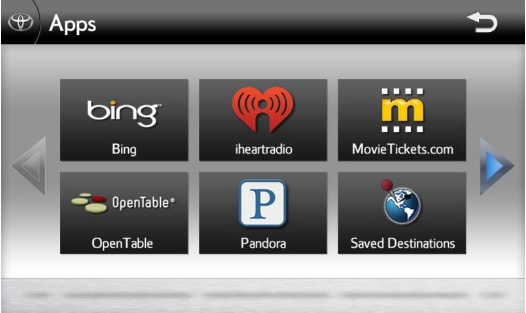 It used to be so simple: cars had radios, and you tuned the dial to the station you wanted to listen to. Then came in car phonographs (really), followed by tape players, followed by CD players. By the time MP3 player integration became standard in all but the lowest end cars, the writing was on the wall: infotainment systems, like Ford’s SYNCH, would become the next evolution of in-car entertainment. Now Toyota is joining the party with the launch of Entune at this weeks Consumer Electronics Show, and the automaker is clearly determined to one-up Ford SYNCH.

Entune, like SYNCH, works in conjunction with your mobile phone’s data plan, to provide you with up to the minute information on restaurants, movie times, shopping, news or sports scores. IHeartRadio will find you a local station that plays what you want to hear, or you can use Entune to stream Pandora. Want to find the hottest sushi-fusion-greek cuisine place in reasonable driving distance, or are you looking for a vibrating adult novelty shaped like the Statue of Liberty? Bing can help you with that, and Open Table can find nearby restaurants that have available seating. You can even buy movie tickets from the car, just in case that ten foot walk to the box office window tests the limits of your endurance.

Like Ford’s Synch system, Entune will allow uses to interact via a touch screen display or via voice commands. Voice commands will require you to learn Entune’s own unique sequence of commands, which takes a lot of trial and error or a lot of time reading the owner’s manual (like THAT would happen). I haven’t used Entune, but I’ve used Synch, and find the voice commands to be neither intuitive nor easy to remember. Until someone builds a system that will recognize a command like “tune to XM, Lithium” or “find the nearest Starbucks”, voice command systems will never live up to their hype. I promise an unbiased opinion of Entune, just as soon as I can test it out.