Mercedes-Benz B55 Is A Commuter Car I Could Love 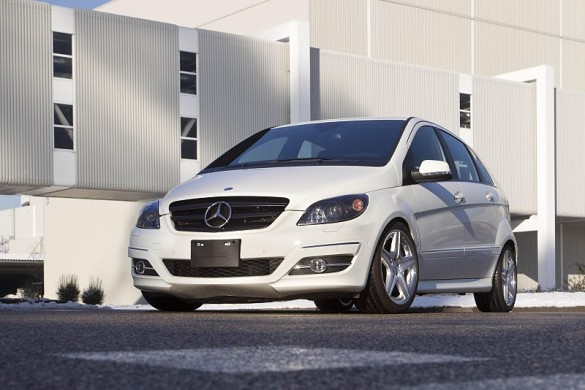 The one-off Mercedes B55.

The Mercedes Benz B Class isn’t a notable car to the automotive enthusiast. Designed for the EU as a “family size” version of their diminutive A Class commuter, the B Series (and it A Series sibling) are the only Mercedes-Benz vehicles built in a front wheel drive configuration. Mercedes describes the car as a “Compact Sports Tourer”, but even the fastest version tops out at 193 horsepower, which isn’t exactly “Sports Tourer” territory in my opinion. The car has been launched in Canada, but it’s yet to trickle down into the United States; officially, the reason is the strong Euro, but I suspect Mercedes sees the B Class as a hard sell in this country.

What if you could shoehorn in a 388 horsepower, 5.5 liter Mercedes-Benz M273 V8, and turn the car into a rear driver? What if you used a Mercedes rear end that was more than capable of handling the engine’s torque, and what if you fitted brakes scrounged from a C32 AMG on all four corners? Now THAT would make my Teutonic hormones sit up and beg, and that’s exactly what some bratwurst-and-beer-fueled employees of Mercedes’ Rastatt assembly plant did in their spare time. While the project isn’t likely to see production, Mercedes isn’t exactly shying away from the publicity it’s created, either. I wouldn’t be surprised to see the B55 at select events throughout the EU, and if there’s enough interest, who knows what’s possible?