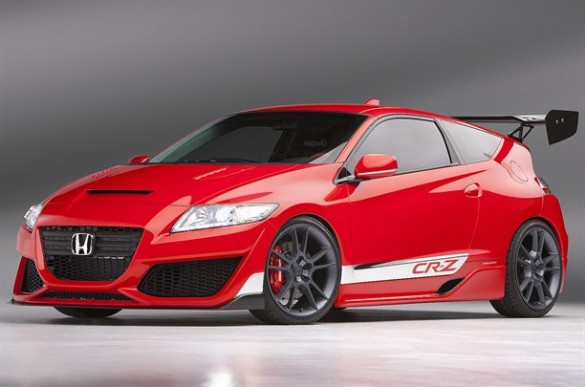 It’s probably no secret that Honda Motors America didn’t buy into the “hybrid sports car” concept of the CR-Z. Give the enormous shoes the car had to fill, HMA predicted early on that the car would be a sales flop. Even in California, land of the Prius, sales of the two seat pseudo-sport coupe have been underwhelming. What the car really needs is an infusion of horsepower, some weight reduction and a switch to conventional (not regenerative) brakes. Honda’s working on just such an animal, but now comes rumor that Honda will fast-track the gas-only turbo CR-Z into production. If the “unnamed sources” are correct, the worthy successor to the CRX Si could hit dealer showrooms as early as next spring.

Two versions of the gas-only CR-Z will be manufactured; the base model will use a turbocharged 1.6 liter four to make 160 horsepower, while the tuned version (Si, presumably) will get 200 horsepower from the same displacement. That’s quite an improvement over the current CR-Z’s 112 horsepower, or 126 horsepower if you include the electric motor. Losing that motor, as well as the batteries and controller, should shave a few hundred pounds from the front of the car. Lighter weight, improved balance and more horsepower are exactly what the CR-Z needs to compete in the market, and I think the revised car has the potential of being a badly-needed home run for Honda. I can’t wait to drive one.