The EU Gets Ford’s Fiesta Sport Plus; Will We? 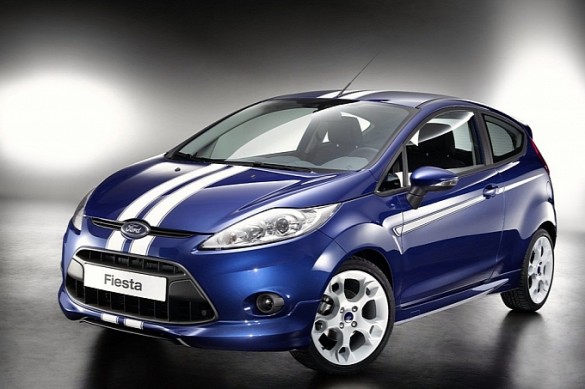 I liked Ford’s new Fiesta well enough when I drove it, but there isn’t much there to catch the attention of driving enthusiasts. The chassis felt solid and the car handled fairly well, but there wasn’t much entertainment to be had from the 1.6 liter, 120 horsepower four. Granted, the Fiesta is supposed to be an entry level commuter (albeit a well-appointed one) and not a hot hatch, but zero to sixty takes nearly ten seconds. That may have been noteworthy in 1975, but by today’s standards that’s slow even for an SUV or hybrid. How many more Fiestas could Ford sell if they just tightened things up a bit and gave it more horsepower?

Ford customers in the EU will soon get to answer that question, as Ford has announced a limited edition “Fiesta Sport Plus” three door hatch version. In addition to the obvious body kit, the car gets lightweight 17 inch wheels, a revised interior and an upgraded 1.6 liter Duratec engine that puts out 134 horsepower. An additional 14 ponies may not sound like much, but remember that the Fiesta is a light car. Zero to sixty now comes up in about 8.5 seconds, which is about a second quicker than the current U.S. version.

There’s no word yet on whether the Fiesta Sport Plus will make it stateside, but Ford isn’t happy with U.S. Fiesta sales to date. Would a Sport Plus variant be enough to get buyers into showrooms? I suspect the answer is yes, but not in the kind of numbers that Ford would like to see. If I was a betting man, I’d say the chances of seeing a Fiesta Sport Plus at a U.S. Ford dealership lies directly between “slim” and “none”.