2012 Volkswagen Beetle: The Sportiest, Most Fuel-Efficient Beetle Ever Debuts 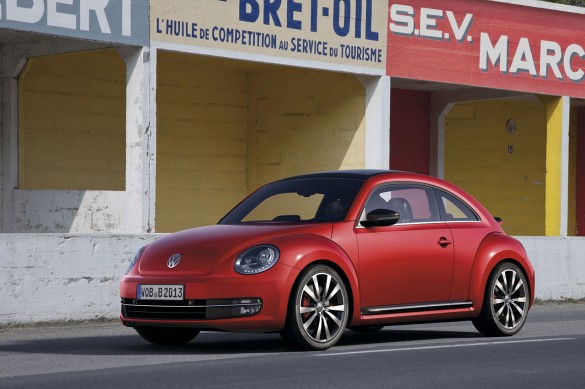 It is no denying that the Volkswagen Beetle is one of the most recognizable and highest selling vehicles still on the road. The VW Beetle, an automotive icon, was first introduced in 1938 with a design that was different from everything else on the road receiving its fair share of criticism. Today that icon is reinvented once again carrying a respected tradition in the automotive industry.

Most of us remember when the “New Beetle” was introduced in 1998 to rekindle a historic automobile named after an insect. It was a success in modernizing and captivating potential buyers and those who will always recognize the Beetle as a historic staple in the automotive world. With over 22.5 million units built to date, the Beetle is the longest running and most manufactured car of a specific platform in the world.

The new 2012 Volkswagen Beetle is totally redesigned. Incorporating today’s technology and fuel-efficiency, the 2012 Beetle is the best modern interpretation of the ‘Bug’. For 2012, Volkswagen has made the Beetle sportier and more fuel efficient and at the same time making it more appealing to the masses. Slated to go on sale late this year in the USA, the 2012 VW Beetle will sport three different powerplants. A 2.5-liter 5-cylinder 170hp/177 foot-pounds of torque will power the entry level Beetle. An optional 2.0-liter TDI diesel engine will have 140hp/236 foot-pounds of torque. The top of the line Beetle will have 200 horsepower and 207 foot-pounds of torque to play with from a 2.0-liter TSI engine.

A XDS cross differential (limited-slip) system will be standard on the 2.0-liter TSI models helping to transfer extra torque to the wheel(s) with the most traction. Transmission choices will include a 5-speed manual or optional 6-speed automatic on 2.5L models. Volkswagen’s acclaimed DSG® 6-speed dual-clutch transmission will be offered on the TDI Clean Diesel and 2.0L TSI turbocharged gasoline models, while a 6-speed manual will come standard.

The 2012 Beetle 2.0L TDI Clean Diesel is the most fuel-efficient Beetle ever. While meeting alll U.S. emission limits, the diesel engine will offers a manufacturer mpg estimate of 40 mpg highway and 29 mpg city.

View the full 2012 Volkswagen Beetle Press Release below for additional information and specs.

VOLKSWAGEN DEBUTS THE SPORTIEST, MOST FUEL-EFFICIENT BEETLE EVER

Wolfsburg / Shanghai / Berlin / New York – When the first Beetle rolled off the production line, it was called simply the Volkswagen — “the people’s car” — but its distinctive shape inspired nicknames across the globe: Beetle, Käfer, Vocho, Coccinelle, Fusca, Maggiolino or 甲壳虫! In total, 21.5 million cars were sold.

More than 60 years later, in 1998, the “New Beetle” rekindled the spirit and imagination of the original to a new generation of Volkswagen owners. The second generation version sparked another round of uplifting and joyous enthusiasm known as Beetle Mania.

Today, the Beetle opens a new chapter in its remarkable story. The third generation of the internationally beloved Beetle is celebrating a transcontinental world debut simultaneously in Shanghai, Berlin and New York.

Only someone who knows and respects the Beetle’s heritage could produce a new generation of this storied vehicle. The task for Volkswagen engineers was clear. They had to develop a modern interpretation of the Beetle, with all the benefits of today’s technologies and efficiencies, and the driving characteristics that define the Volkswagen brand. The result had to remain affordable and stay true to the Beetle’s spirit and great heritage.

The design of the new Beetle presented another challenge. How does one reinvent a look that is so recognizable and unique? Volkswagen Group Design Chief Walter de Silva and Volkswagen Brand Design Chief, Klaus Bischoff, welcomed the task and set an ambitious objective: “Design a new original!”

The designers wanted to develop the new car around the earliest Beetle profile rather than the 1998 New Beetle. They wanted a car that respects the past but looks toward the future. And that is what they created.

The 2012 Beetle is an automotive icon reinvented. Placing the original Beetle and the 21st Century Beetle next to one another, it’s clear that the lines of the rear sections are nearly identical, but the overall look is bolder and more dynamic. The Beetle also breaks free of the design geometry defined by three semi-circles (front wing, rear wing, domed roof above it).

“The Beetle is now characterized by a clean, self-confident and dominant sportiness. The car not only has a lower profile; it is also substantially wider, the front hood is longer, the front windshield is shifted further back and has a much steeper incline. All of this creates a new dynamism,” explains Klaus Bischoff.

The 2012 Beetle is 71.2 inches wide (3.3 inches wider), 58.5 inches tall (.5 inches lower) and 168.4 inches long (6 inches longer). The new focal point is the C-pillar. The development team also increased the car’s track widths and wheelbase. All of this gives the Beetle a powerful appearance with muscular tension.

Another feature is the rear spoiler that is integrated into the design (standard on 2.0L TSI engines with 200 hp). The top surface of the rear spoiler is black, while the underside is painted in body color.

The Beetle is sportier, offering both turbo-charged TDI® Clean Diesel and turbo-charged gasoline engines, in addition to dual exhaust, performance-handling packages, 19-inch wheels, sport seats and new, sleeker styling. Volkswagen will offer a panoramic roof, a range of audio options, including the Fender® Premium Audio System, and a customization program for the 2012 Beetle with a large number of personalization options, including a wide variety of colors and wraps along with an annual theme model.

The 21st Century Beetle offers an agile, driver-oriented coupe experience with a quality of materials that goes beyond all class limits. The car’s styling, ergonomics and quality interact to create a new, friendly car with a highly individual nature.

The shape and use of color in the painted or carbon-look dashboards harkens back to the design of the first Beetle.

Three round instrument gauges are arranged in front of the driver (tachometer, speedometer, fuel gauge) providing all key information at a glance. A multifunction display is integrated in the speedometer in middle position. The steering wheel is specially designed with optional painted accents in the spokes depending on the equipment line.

Framed by two air vents, the selected audio/navigation system is optimally located in the driver’s visual field on the dashboard. Within easy reach, climate controls are situated just below.

Similar to the original Beetle, the new car has an extra glove box integrated into the dash. The lid folds upward, while the standard glove box opens downward. Another classic feature: the optional auxiliary instruments above the selected audio/navigation system: oil temperature, clock with stopwatch function and boost pressure gauge.

The “cathedral ceiling” dome roof of the New Beetle has been replaced with a sleek and sporty roofline. Front and rear passenger headroom remains plentiful. In the rear seating area, the longer roof section results in more space. The trunk is significantly larger, offering 10.9 cubic feet of space. A split-folding rear seat and a wide opening trunk lid ease loading and unloading.

The Beetle 2.0L TSI is the sportiest model offered. With 200 hp and 207 lb.-ft of torque, power delivery will remain smooth and direct across the rpm range. The four cylinder turbo engine is estimated to provide 30 mpg highway fuel economy. To ensure that power is applied properly in challenging conditions, the 2.0L TSI model features the XDS® cross differential (limited-slip) system. The system electronically monitors input from various wheel sensors and, in the event of slippage, transfers extra torque to the wheel or wheels with the most traction.

The 2012 Volkswagen Beetle will be available in two trim lines “Design” and “Sport.” Each has a unique character. The Beetle can also be customized with a wide choice of optional features. Key features include:

Radio-CD and radio-navigation systems. Standard in the Beetle is the RCD 310 sound system with 8 speakers (includes dual tuner). The premium VIII top audio system is the RCD 510 with integrated CD changer, interface for SD cards and touchscreen. For the first time ever, navigation will be offered in the Beetle, with the RNS 315 featuring a 5-inch touchscreen, CD player and SD card slot.

Panoramic roof. The transparent, panoramic tilt/slide glass sunroof is 80 percent larger than on the previous model. The insulating glass blocks 99 percent of UV radiation and 92 percent of heat energy.

Fender Premium Audio System. The 2012 Beetle will also offer concert quality sound with an optional Fender Premium Audio System equipped with an additional subwoofer and 400 watts of output power. Embedded in the vehicle design is proprietary Panasonic® speaker technology. The system covers the cabin with directional sound from front door speakers that generate imaging beyond the capabilities of traditional speaker designs. It cuts through the noise and other distractions with front dual voice coil speakers, with extended range for all musical genres. Those choosing this sound system also receive adjustable interior ambiance lighting.

Keyless Access. Volkswagen’s automatic keyless entry and starting system, which allows the driver to operate without a door or ignition key,is appearing for the first time in the Beetle. When one of the front door handles is touched, the system detects access authorization from a transmitter, then unlocks the Beetle and starts the engine with the push of a button.

The 2012 Beetle features both active and passive safety. It includes Volkswagen’s advanced Intelligent Crash Response System, which initiates automatic safety protection in some types of collisions — the electrical supply to the fuel pump is shut off, the doors unlock and the hazard lights switch on. Electronic Stability Control (ESC) is standard, as are driver and front passenger airbags and Side Curtain Protection® airbags in front and rear.

The 21st Century Beetle is also covered under the no-charge Carefree Maintenance Program. All scheduled maintenance is covered for the length of the New Vehicle Warranty – three years or 36,000 miles, whichever occurs first. Additionally, all current Volkswagen vehicles use synthetic oil, which, when combined with state-of-the-art German engineering, eliminates the need for a 5,000 mile oil change, and allows owners to go farther between scheduled oil changes.

Founded in 1955, Volkswagen of America, Inc. is headquartered in Herndon, Virginia. It is a subsidiary of Volkswagen AG, headquartered in Wolfsburg, Germany. Volkswagen is one of the world’s largest producers of passenger cars and Europe’s largest automaker. VWoA sells the Eos, Golf, GTI, Jetta, Jetta SportWagen, CC, Tiguan, Touareg and Routan through approximately 600 independent U.S. dealers. All 2011 Volkswagen vehicles come standard-equipped with Electronic Stability Control (ESC). This is important because the National Highway Traffic Safety Administration (NHTSA) has called ESC the most effective new vehicle safety technology since the safety belt. Visit Volkswagen of America online at www.vw.com to learn more.