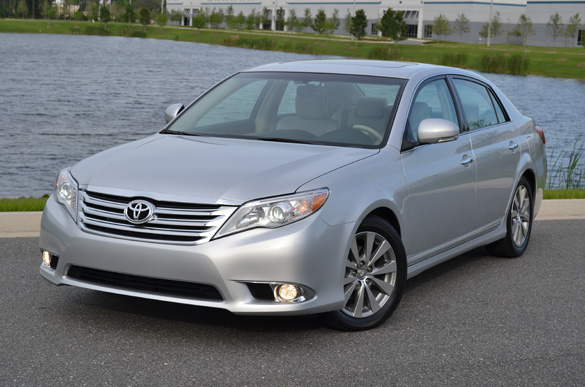 Toyota has introduced a newly redesigned Avalon for 2011 incorporating silky smooth V6 power and a spacious cabin that evokes subtle elegance. The newly styled Avalon combines practicality while offering a soft luxury feel to driving Toyota’s largest sedan. The outside is distinctively styled bringing a fresh new look to the front and rear fascia.

The new 2011 Toyota Avalon is sometimes referred to as the “Buick” of Toyota. Anyone thinking that very thing would not be too far off of the boat considering the new Avalon has a soft, (but well damped over large bumps), suspension that could literally put you to sleep on the highway. As you can imagine, handling is not the Avalon’s forte, but being a full-sized practical sedan is. 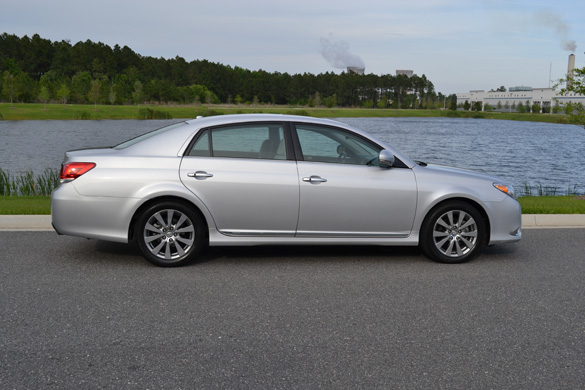 The Avalon now comes in just two trim levels, the base Avalon and the Avalon Limited. All Avalons come equipped with leather seats, eight-way power driver seat, backup camera, dual-zone climate, moonroof and 17-inch alloy wheels. My Limited trimmed test vehicle included cooled/heated front leather bucket seats, rain-sensing variable-speed wipers and smart-key (unlocks the doors with the touch of the door handle or locks with a push of the door handle button) with push button start. My test vehicle was also equipped with an optional voice-activated touch-screen navigation system and JBL Synthesis stereo. The sound from stereo system was decent with clear audio coming from all 12 speakers. Bluetooth music streaming was also included on my test vehicle allowing me to seamlessly sync my iPhone’s music and phone dialing/answering functions. 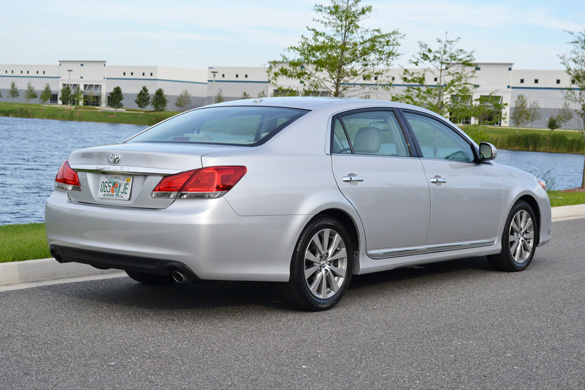 You may catch a few distinctive design changes on the outside of the new 2011 Avalon, such as the new self-leveling projector HID headlights. The Avalon continues a tradition of having a long wheelbase of 111-inches. In a way the new 2011 Avalon has a sportier look than earlier models. At one time, many consumers thought the Avalon was specifically targeting buyers of Buicks but I can honestly say those who want a slightly bigger Camry may find the Avalon appeasing.

The new front bumper now has fog lights trimmed in chrome accents with an extremely wide illumination. If Toyota was ever targeting the middle aged to older demographic, then they will have no problems in that area. With forward illumination at night between the HID projector lamps and wide-angle fog lights this may make our Avalon more enticing. The low-slung side skirts of the Avalon give it a lowered stance appearance. The doorsill chrome strips add a luxury appeal as does the flat trunk. 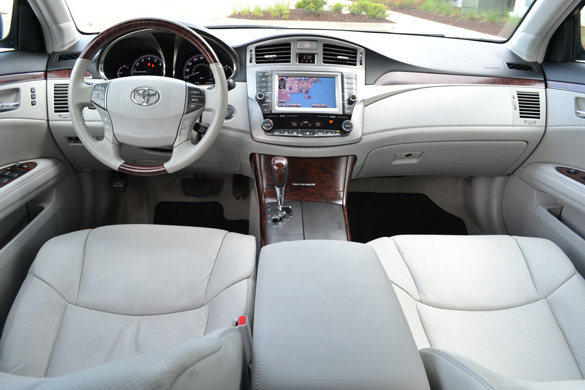 Inside of the large 106.4 cubic-feet passenger volume cabin you will find a contemporary feel and design. The wide long-running dashboard gives away to a big-car vibe to everything you see up front. The plastic trim pieces are not cheap but unfortunately they are not expensive either, after you start getting all feely-touchy with the new Avalon. This is even more apparent with the faux wood trim. Let’s just say mediocrity still overtakes the Avalon’s dashboard with the exception of a few elements such as the newly styled gauge cluster and center-stack LCD touch screen. The controls and dials are clearly marked making it easy to operate basic vehicle functions. The new Optitron gauges with white needles are easy to read in the daytime and night. 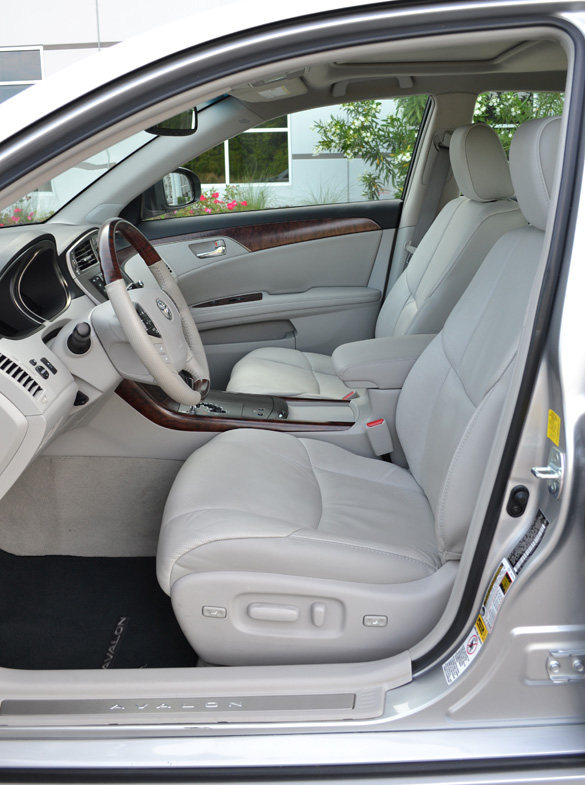 Toyota has such a tradition of building reliable family oriented sedans that cars like the Camry and new Avalon can be called ‘driving appliances’. The cabin of my new Avalon test vehicle was extremely quiet with no rattles or foreign sounds what-so-ever. The soft suspension is a bit too ‘bouncy’ for my taste, but those looking for an affordable full-sized sedan may find the Avalon’s ride to be just fine. Take the Avalon into a turn too hot and you are quickly reminded that this vehicle was simply not designed for spirited driving. 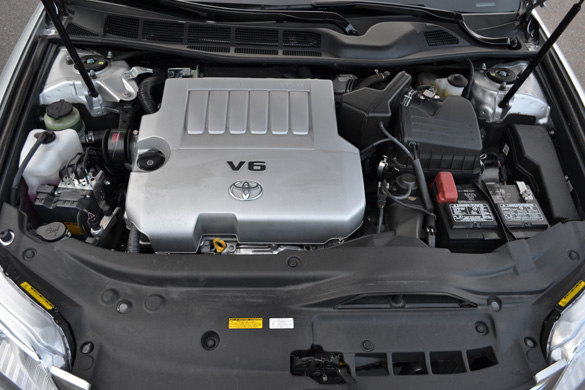 The 268 horsepower and 248 pound-feet of torque V6 engine provides plenty of power. If you lay down your right foot, you get a surge of power, which will quickly engage the traction control to intervene as the front wheels begin to lose traction. Torque steer is another concern outside of the Avalon’s limited sports-car-like handling abilities. The smooth 3.5-liter V6 is overly eager to inject enough power for the 6-speed transmission to direct more power to one front wheel than the other. It would be wise to keep both hands on the steering wheel under wide-open-throttle or you could end up putting this 3,616 pound sedan in a ditch.

0-60mph times come in a surprising 6.2 seconds. Luckily the Avalon still manages to get 20mpg in the city and 29mpg on the highway, and you do not have to pay extra for premium fuel. I saw a consistent 24mpg during my daily commutes to the office, which is a mixture of highway and light-traffic city driving. The 2011 Avalon is certified as an ULEV (Ultra Low Emissions Vehicle).

Steering feel is somewhat light and neutral providing very little feedback from the road. This gives you a smooth ride over poorly paved roads. The Avalon’s brakes are firm and eager to stop the vehicle. You can feel the electronic brake force distribution during panic stops with very little noticeable fade when they are heated up. 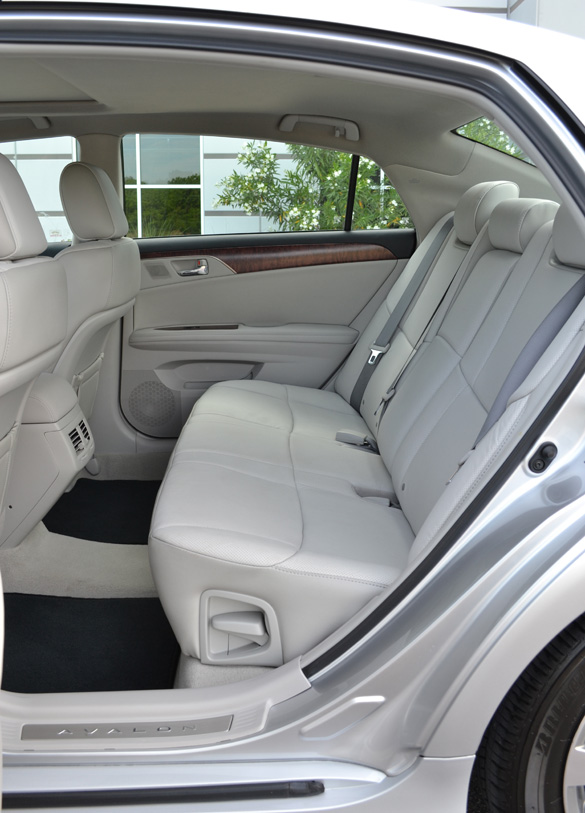