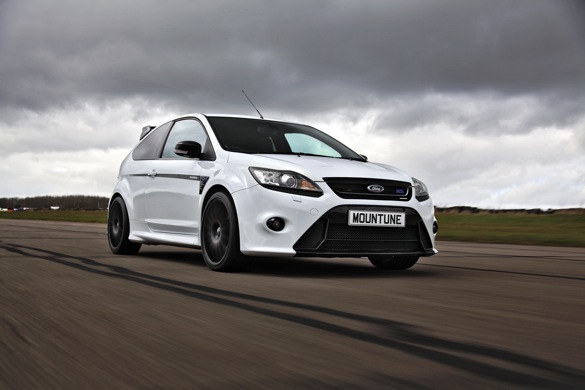 First the good news: Gunnar Herrmann, Ford’s global head of small cars, has confirmed that the much-revered Ford Focus RS will be back for a third generation, and it may produce as much as 350 horsepower from its 2.0-liter EcoBoost engine. Now the bad news: if you want to get your hands on one, you’d best live somewhere other than the United States, which will probably have to make due with the upcoming Ford Focus ST. The Focus RS, we’re told, is “too expensive” and “too narrowly targeted” to appeal to U.S. buyers.

Hermann also shot down rumors that the next generation Focus RS would switch to all-wheel-drive instead of the front-wheel-drive used on previous versions. Ford’s “Revoknuckle” suspension does an admirable job of limiting torque steer, and Focus RS models also include a torque-biasing Quaife limited-slip differential to get the power to the ground. While AWD would improve traction, it would also increase the car’s weight, complexity and cost.

There’s no word on when the lucky bastards in the rest of the world will see the new Focus RS, but my guess is in 2013 as a 2014 model. In the meantime, those of us on this side of the pond are counting down the days until Ford launches the 250-horsepower Focus ST in the United States. The automaker hasn’t given us specifics, but I’d be willing to bet that the 2012 Ford Focus ST will be launched at next year’s Detroit Auto Show.

Editor’s Note: We incorrectly attributed the origination of this story to Left Lane News, instead of Drive.com.au, who first published it. Our apologies to the Drive.com staff, and we promise to buy a round in reparation next time we’re in Sydney.