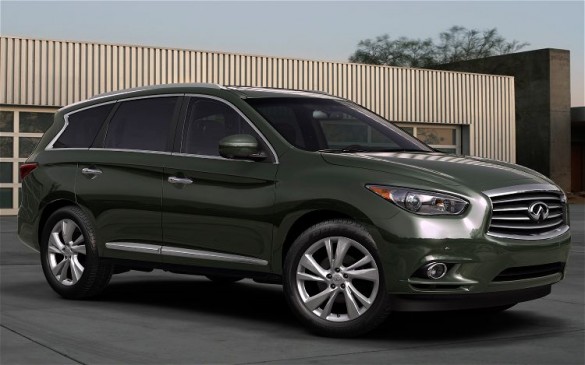 Leave it to social network pages to tease you with spectacular introductions to new features, stories and in some cases, an all-new automobile. In the case of Infiniti, they have decided to finally release complete images of the upcoming Infiniti JX Concept 7-passenger crossover vehicle just before its intro at Pebble Beach this weekend.

We are told the images of the JX Concept, seen here, are a fairly accurate preview of the forthcoming 2013 Infiniti JX. Set to compete with the Audi Q7, Acura MDX, Mercedes-Benz GL and Buick Enclave, the Infiniti FX will be the first three-row luxury crossover for the automaker.

Ben Poore, Infiniti Americas vice president, said in a prepared release, “And like every segment Infiniti enters, we plan to shake up the status quo with a vehicle that is guaranteed to become the new benchmark for style, hospitality, roominess, advanced telematics, and safety technologies.”… “With the JX, you will even be able to leave a child seat latched to the 2nd row while getting in or out of the 3rd row – just one example of the vehicle’s inspired flexibility and versatility,” added Poore.  “The 3rd row isn’t the typical penalty box either, with adult-sized room for all occupants and five-and-a-half inches of 2nd row forward-back adjustability.”

It is rather obvious that the JX will fill the gap between the FX and QX SUVs. Even the styling seems to be a bridge between the two.

JX37 anyone? Some technical details have yet to be released on the new JX but we now know that it will be powered by the companies prided VQ-series V6 engine mated to a CVT transmission. Additionally, we would not be surprised at all to see the hybrid powerplant from the Infiniti M35h make its way into the new JX.

Want to see the JX in the flesh? You will have to wait until Saturday, August 20th to catch a glimpse of the new JX at the Pebble Beach Concours d’Elegance. A 1 pm EST (12:00 noon CST, 10 am PDT) live chat with Shiro Nakamura, SVP and Chief Creative Officer and Ben Poore, VP Infiniti Americas will be able to answer your questions live directly from Pebble Beach via links on the Infiniti Facebook page.

PEBBLE BEACH, Calif. (Aug. 18, 2011) – The Infiniti JX Concept, a preview of an innovative new 7-passenger/3-row luxury crossover that joins the Infiniti lineup in spring 2012, made its world debut today at the Pebble Beach Concours d’Elegance.  The JX Concept was unveiled by Senior Vice President and Chief Creative Officer Shiro Nakamura prior to its display throughout the weekend’s activities at the famed Lodge at Pebble Beach.

“The JX Concept advances the Infiniti design language, sharing design cues of the Infiniti Essence concept, yet interprets those elements in ways suitable to the needs of a family luxury crossover,” said Nakamura.  “From the dramatic front grille and headlight design to the crescent-cut D-pillar and greenhouse shape, the JX Concept shines as a fresh, bold alternative to the many flavors of vanilla currently dominating the three-row luxury crossover segment.”

Beyond its stunning exterior, the new Infiniti JX Concept is designed to excel in three areas where luxury crossover buyers put an emphasis – interior flexibility and roominess, safety, and innovative hospitality features.

“The three-row luxury crossover segment is one of the fastest growing among all luxury vehicle segments, providing a huge opportunity for Infiniti,” explained Infiniti Americas Vice President Ben Poore.  “And like every segment Infiniti enters, we plan to shake up the status quo – with a vehicle that is guaranteed to instantly become the new benchmark for style, hospitality, roominess, advanced telematics and safety technologies.”

In the interior, for example, the production Infiniti JX will offer what is expected to be class-leading roominess, along with a 2nd row seat design that tilts and slides forward providing exceptionally easy 3rd row access.

“With the JX, you will even be able to leave a child seat latched to the 2nd row while getting in or out of the 3rd row – just one example of the vehicle’s inspired flexibility and versatility,” added Poore. “The 3rd row isn’t the typical penalty box either, with adult-sized room for all occupants and five-and-a-half inches of 2nd row forward-back adjustability.”

The Infiniti JX continues Infiniti’s tradition of developing world’s first technologies, offering the currently available Blind Spot Intervention and adding a new feature, Backup Collision Intervention.  With this technology, when the transmission is in reverse, the JX will help the driver detect crossing objects behind the vehicle and, if necessary, the system will automatically engage the brakes to help avoid a collision.

The Infiniti JX will also offer technologies designed to make owners lives a bit easier and more efficient, such as a 14-speaker Bose® Studio Surround® sound system with Waveguide bass technology and an advanced Infiniti Connection Telematics system that can automatically synch the owner’s calendar and provide navigation guidance to appointments.  It will also feature the Infiniti Personal Assistant, Infiniti’s new personal concierge service with 24-hour access to a live team of professional assistants.  The Infiniti Personal Assistant benefit is now offered free-of-charge with every 2012 Infiniti vehicle purchase.

And, in keeping with Infiniti’s “Inspired Performance,” the Infiniti JX will offer a balance of driving exhilaration and fuel efficiency through a combination of a powerful V6 engine and all-wheel or front-wheel drive.  The Infiniti JX will also be the first Infiniti to utilize a sport-tuned, but fuel-efficient continuously variable transmission.  The CVT will mimic a step transmission when the Sport mode of the Infiniti drive selector is engaged.  Additional information regarding the drivetrain and other systems will be provided at the debut of the production version of the all-new Infiniti JX at the Los Angeles Auto Show in November 2011.

“As a premium crossover with a real 3rd row – along with Infiniti levels of hospitality and driving pleasure, the new JX is another breakthrough design from the brand that has been breaking new ground for more than 20 years,” Nakamura added.  “We will continue to challenge conventional thinking.”

In addition, in conjunction with the global reveal of the Infiniti JX, Infiniti is launching the JX Concept “Power of 7” Challenge on Facebook.  The challenge invites fans to submit inspiring creations relating to seven Infiniti JX categories: Epicurean, Art & Fashion, Film, Interior Design, Music, Athletics and Technology & Science.  The community will vote on the submissions, and winners in each category will receive a cash prize and compete to win trip to 2011 Los Angeles Auto Show.  More information, including official rules, is available at www.facebook.com/infiniti.