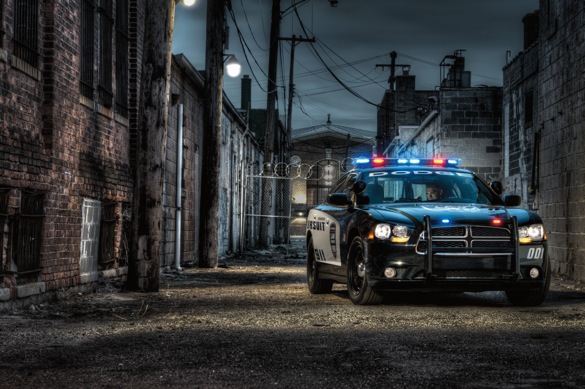 What you don't want to see in your rear view mirror. Image: Chrysler Group LLC

For the record, it’s always a bad idea to run from the police. Even if you’re tempted to mat the accelerator when you see that aging Crown Vic getting larger in your rear view mirror, just remember this: you can’t outrun a radio. Your odds of outrunning a police cruiser just got a bit smaller, too, since the 2012 Dodge Charger Pursuit V8 has set a new police car lap record at Grattan Raceway in Michigan State Police testing.

While I don’t have lap times for the Ford Interceptor or the Chevy Caprice Interceptor, the Dodge Charger Pursuit V8 lapped Grattan in 1:33.70. That’s just a few tenths of a second slower than a Shelby GT500 or a Nissan 370Z, and it’s faster than a Lotus Elise or a Mitsubishi Lancer Evo X MR. It’s even faster than a Chevy Camaro SS, which weighs less and packs more horsepower.

The Dodge Charger Pursuit V8 comes with a 5.7-liter Hemi V8, good for 370 horsepower and a 0 to 60 time of 5.8 seconds. It’s got a top speed of 151 miles per hour, and comes with heavy duty everything to ensure that high speed chases have as little drama as possible. It even returns up to 25 mpg on the highway, thanks to Chrysler’s cylinder deactivation system.

Dodge also offers the Charger Pursuit in a V-6 version, which still packs 292 horsepower and returns up to 27 mpg highway. That may be good enough for local municipalities, but we’re guessing the state police nationwide will be ordering a lot of Charger Pursuit V-8 models in the coming months. Be afraid when you see one in your rear view mirror.