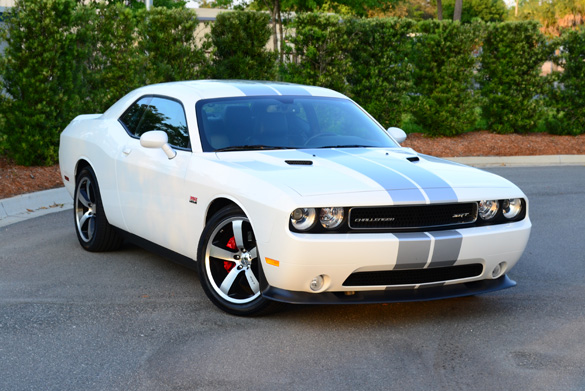 When it comes to an American muscle car icon, the Dodge Challenger aspires to bring its original styling to the forefront in an easily recognizable new retro skin. The excitement does not stop there. The new 2012 Challenger SRT8 touts a serious punch in the form of a 470 horsepower 470 ft. lbs. of torque 392 HEMI V8 engine.

For model year 2012, the new Challenger SRT8 gets just a few changes such as a new Sport mode and flat-bottom sports steering wheel. Just like the other 2012 SRT vehicles, the Street and Race Technology division incorporates new adjustable dampers to turn the husky chassis into a more-capable GT sports car on the lateral acceleration charts. 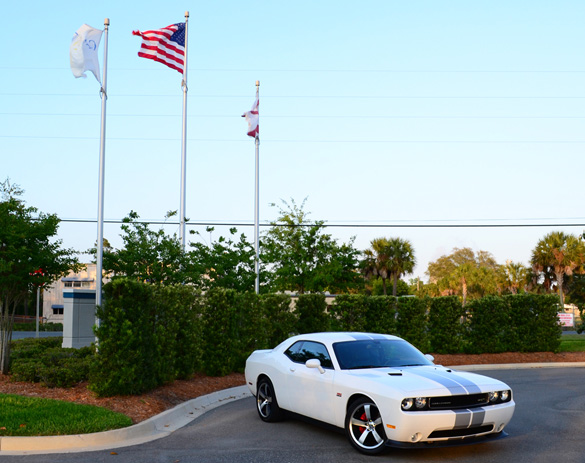 Having tested the 2011 Challenger SRT8 392 last year with a 6-speed manual transmission, I became familiar with the monstrous proportions of power that this vehicle is capable of. For this year, the 2012 Challenger SRT8 392 with a 5-speed automatic transmission found its way into my garage.  To my surprise, there is not much of a contrast between the two. Other than different gear ratios and the obvious torque converter sapping what seemed to be only a miniscule amount of power to the rear wheels, things are kept virtually the same.

The 2012 Dodge Challenger SRT8 392 in a slush-box (auto transmission) flavor may just be the choice for the light-hearted enthusiast. Considering how technology is out-driving the purist these days, it is no wonder that automakers of the finest sports cars have just about eliminated manual transmissions in their lineup. Dodge uses their proven 5-speed auto tranny, which is plenty capable of handling the massive HEMI power. The same unit is found in the 2012 Chrysler 300 SRT8 and Charger SRT8, which I had the pleasure of reviewing late last year. The manual shift paddles mounted on the steering wheel prove to be useful when you want to get the full grunt out of the HEMI at low RPMs. However, there is a slight delay in shifts at times especially when you reach near redline. In other words, it is best to let the computer handle the shifts when stretching the extremely tall gear cogs. The gearing is even tall enough to run 2nd gear all the way up to 75 mph… perfectly fine because the HEMI V8 has a wide power band. 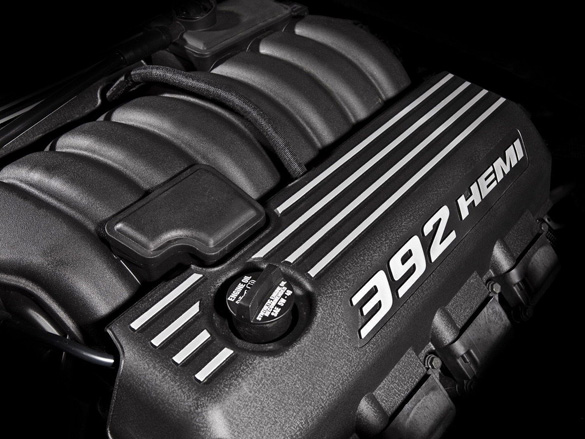 The new sport mode feature, one of the few changes for the 2012 model year, is an essential part of keeping all 4,200+ pounds in check. Sport mode primarily stiffens up the dampers to levels that could almost rattle your teeth out of your mouth. To my surprise, sport mode turns the Challenger into a different animal, entirely changing its handling abilities. The difference in sport mode on or off is basically night and day. The rear end tends to sloppily flop around without the help of sport mode’s extra-stepped valve setting via the active dampened Bilstein shocks. Luckily, in the default non-sport mode, the Challenger SRT8 cooperates nicely on the highway serving as a nice touring machine with a ride similar to the Chrysler 300C or Dodge Charger R/T. Additionally, Sport mode holds the transmission in higher gears longer anticipating spirited driving. Expect to considerably lower the MPG figures from the EPA estimated 14 mpg city and 22 mpg highway to something well south of 13 mpg when in sport mode and having a heavy right-foot at the same time. 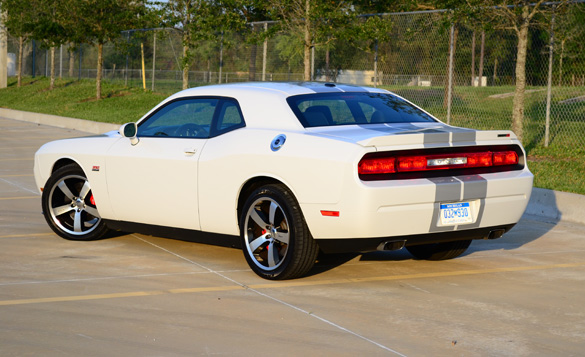 Automatic transmission equipped Challenger SRT8 models receive the Fuel Saver option, which uses intelligent cylinder deactivation where only 4-cylinders are fired under light loads. The computer, unfortunately, recognizes ‘light loads’ as nearly coasting or maintaining a constant speed on a perfectly level road. Cylinder deactivation is very noticeable as the exhaust note changes to a monotone hum and you take notice to a little extra vibration. Once all 8-cylinders kick back in, you hear an abrupt thump from the exhaust and the subtle vibrations from 4-cylinder mode tend to dissipate. 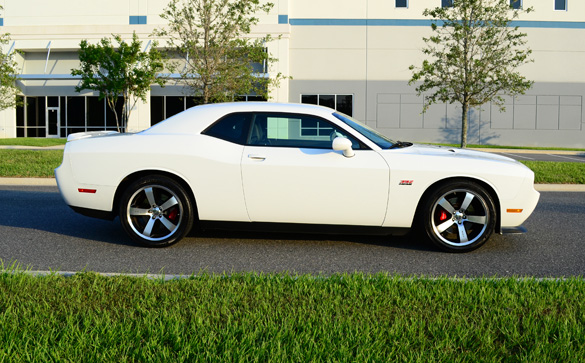 The 2012 Challenger SRT8’s interior remains mostly unchanged from last year except for the new flat-bottom steering wheel. The seats are well proportioned and bolstered just enough to comply with the Challenger’s handling capabilities. The padded dashboard and instrument cluster are specific to the Challenger while the center stack controls/buttons and touch-screen audio/connectivity LCD screen remains customary to older Chrysler/Dodge vehicles. 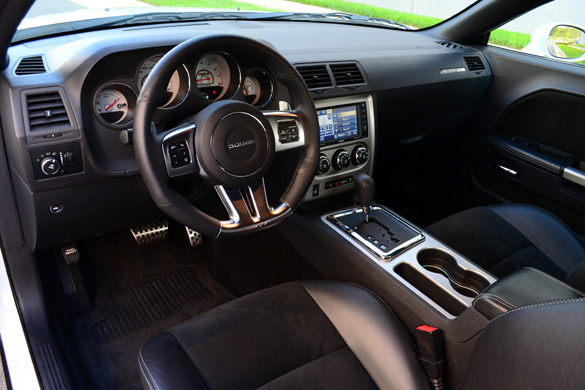 There is no denying that the Challenger is a big vehicle. If the highway-floating 4,200+ pounds of Detroit muscle does not give away its shear size, then the virtually endless proportions of front seating room will. Keep in mind, you can get 5 adults in the Challenger but at the expense of the middle rear-seat occupant ‘ridding the hump’ where the drive shaft runs to the limited-slip differential. 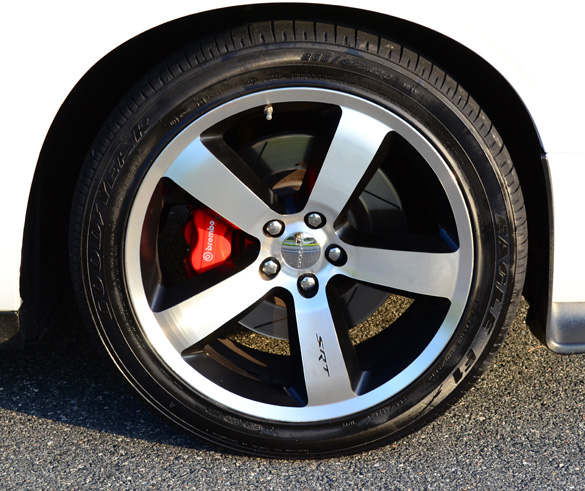 Lighting up the rear tires is virtually a cinch. Just lay into the right peddle and let the plumes of smoke build to your heart’s content, or at least until the rear 255/45 20-inch Goodyear Eagle F1 rubber ceases to exist. 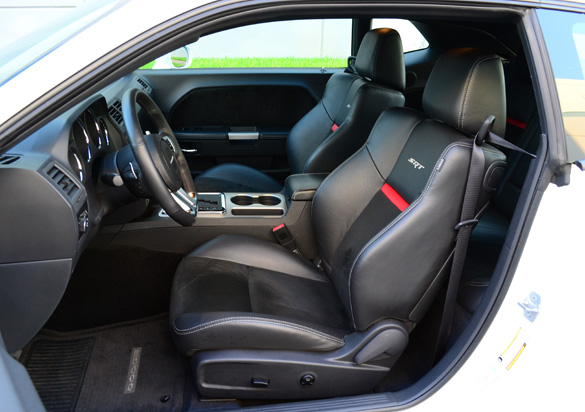 The Dodge Challenger’s styling is definitely an eye turner. For those who remember the original Challenger, or maybe caught a few episodes of The Dukes of Hazard -mistaking the old Charger for a Challenger, will take pride in the Challenger’s exterior proportions and design lines. The SRT8 version of the Challenger takes things to an extreme level with 20-inch forged wheels, 4-piston Brembo caliper brakes up front with 2-pistion in the rear, an aggressive stance, black front splitter and a rear spoiler. To sum it up nicely, the 2012 Dodge Challenger SRT8 392 is simply bad ass looking. It is like an American heritage fest with unlimited beer and a city-wide ban on wine. No wimpy stuff here, just a HEMI-muscle gun show.

Pricing for the new 2012 Dodge Challenger SRT8 392 HEMI starts at a reasonable $43,995 but can easily tack on a couple grand from the short options list.