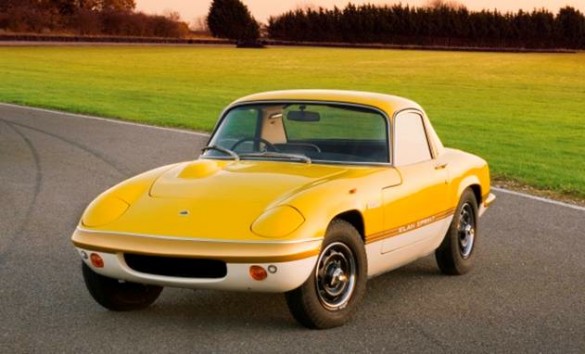 In October of 1962, Lotus launched an all-new roadster at the British Motor Show that would eventually go on to re-write the book on modern, lightweight sports cars. Dubbed the Lotus Elan, the car debuted the use of a backbone tube chassis on a production, road-going car, sported a lightweight fiberglass body and utilized a four wheel independent suspension.

For the day, it was surprisingly well equipped, featuring amenities like wood veneer dash trim, power windows, full (but tissue-thin) carpeting and even a functioning heater. Later versions (namely, the Elan Sprint) could dash from 0-60 mph in just 6.6 seconds, which was seriously impressive back in 1973.

The Elan turned out to be a commercial success for Lotus, and quite possibly pulled the company back from the brink of bankruptcy despite modest production numbers. In total, just over 17,000 were built before production ended in 1973.

The Elan served as inspiration (and a role model) for Mazda’s original MX-5 Miata, a car that’s now gone on to become the best selling sports car in history. Lotus says the Elan influenced today’s Lotus Elise, too, although we have a hard time seeing the similarity between a front-engine, rear-drive roadster and a mid-engine, rear drive Targa, ourselves.

Today, you can still see the occasional Elan on the road or in SCCA Solo competition, proving how good Ron Hickman’s original design was. We tip our hats to Lotus on this occasion, and wish the Elan a very happy 50th birthday.