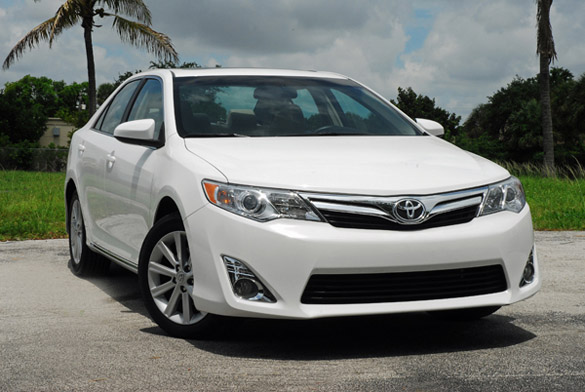 The Toyota Camry has been at the pinnacle of automotive dominance for many years when it comes to sales. The all-new 2012 Toyota Camry received a new design inside and out continuing a forward movement of the best-selling vehicle in America. The new Toyota Camry in its most athletic form, sporting a silky smooth 268 horsepower V6 engine, offers buyers a taste of mid-sized luxury performance wrapped up in a boldly-styled package.

I previously reviewed the new 4-cylinder Toyota Camry LE proving to be my connotation of the best tasting Vanilla Ice Cream on the market. With that said, the new 2012 Toyota Camry XLE V6 test vehicle that I recently tested seems to spice up Toyota’s perfect mid-sized sedan recipe. The biggest difference in the two vehicles is obviously the powertrain. Carried over from the previous year, the 3.5-liter V6 engine remains virtually unchanged still pumping out 268 horsepower and 248 lb-ft of torque. The V6 engine is mated to a smooth-shifting 6-speed automatic always eager to quickly find the right cog when power is demanded. 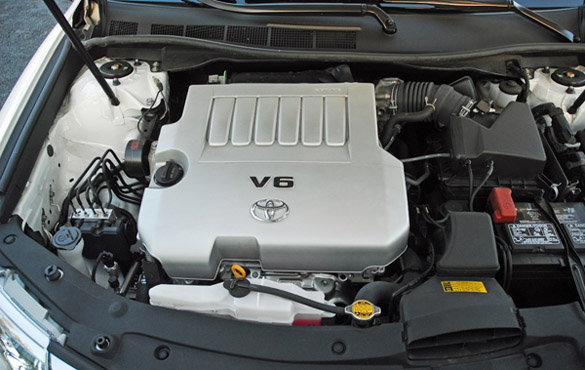 Surprisingly, the new 2012 Toyota Camry XLE V6 is quite the straight-line performer. Power comes on fast and surges the Camry forward with authority. Torque steer from the front-wheel-drive setup is kept to a minimum but begs for your attention if accelerating into a turn. Though, the new Camry V6 is a long shot from being considered ‘sporty’ in the since that it is still a soft sedan to the average enthusiast. 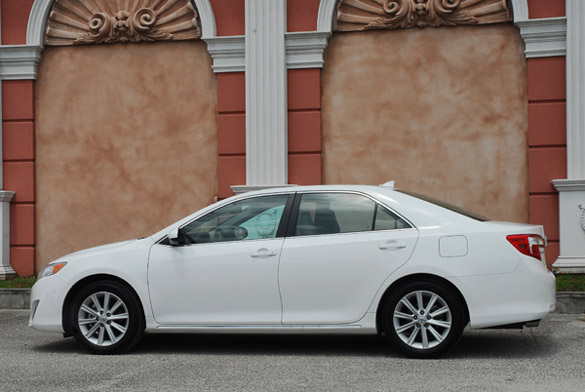 There is a slight price to pay in highway fuel consumption when it comes to the added power of the V6 Camry over the 4-cylinder. My Camry XLE V6 gets a respectable 25 mpg city, same as the 4-cylinder, and 30 mpg highway while the 4-cylinder Camry lands 35 mpg highway. Having practically the same city fuel consumption figures, the V6 is my weapon of choice considering my Camry V6 dashes to 60 mph from a standstill in only 6.6 seconds. With this admirable performance attribute, it is almost attractive to a mild enthusiast. 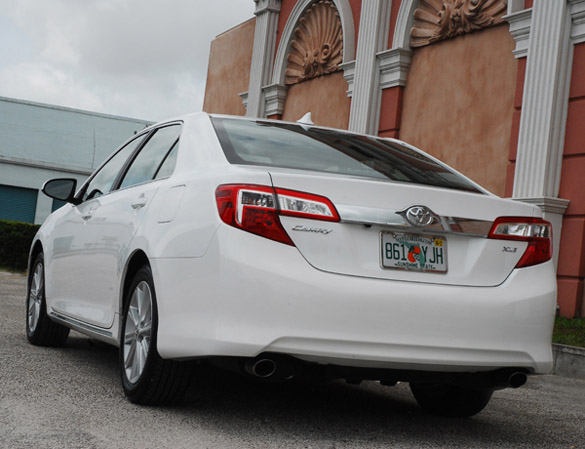 The new 2012 Toyota Camry has a style that stays on the same path as its predecessor. The front fascia has been updated with new lines but does not depart far from the Camry’s original persona. The rear styling, however, is a far move that may take some getting used to. The bold part of the new 2012 Camry’s styling starts and ends with the rear. New body lines seem to somewhat fade into the background only to be highlighted by the subtle exterior chrome trim. 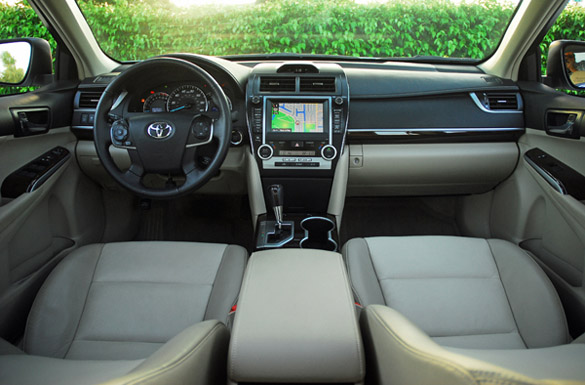 On the inside of the new 2012 Toyota Camry is a dashboard that seems afraid to thrill the driver and passenger. In one way the dashboard soft-touch surface and stitching seems to be a sporty aspect of the interior although the hard plastics found on the face tend to diminish that initial perception. The wide gauges in the dashboard cluster are rather contemporary and expected, but lack any new innovation found in some of the Camry’s competition. The LCD touch-screen blends the rear-view backup camara, audio controls, GPS navigation, specialized smartphone Entune apps (Pandora, Bing search, Weather, Sports, Stocks) vehicle settings. While intuitive and user-friendly, the center LCD screen interface is not all that eye-catching. Maybe a good part about the new 2012 Camry dashboard loaded up with options on the XLE V6 trim, is that it all blends together well and nothing really stands out like it is misplaced.

In traditional Toyota fashion, the perception of the interior quality is good. The cabin, larger than it has ever been, is quiet with only a slight intrusion of the V6 engine’s roar at full throttle. Wind and road noises are also kept to a minimum by the optimized placement of sound insulating materials and acoustic windshield glass. The leather seating areas proved to be comfortable during my 300 mile highway trip. Toyota left no stones unturned with improvements in the 2012 model combining forward-thinking engineering and a taste of today’s technology through the Entune smartphone and web integration applications. 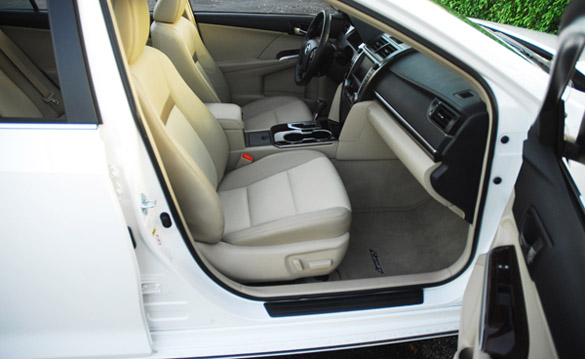 Steering is a bit numb but I contribute that to the new electric steering rack giving ease to operation at low speeds while slighting adding weight when cruising. Handling is somewhat like a sponge and may allow a considerable amount of body roll on sharp turns. Though, proving to provide a lot of comfort on long hauls, the new Camry XLE does not advocate driving like a fool. With smaller 17-inch wheels and tires on the Camry XLE model, it leaves much to be desired for enthusiasts. The larger 18-inch wheels, standard on the SE model, are more than likely to spruce things up a bit in the handling department. 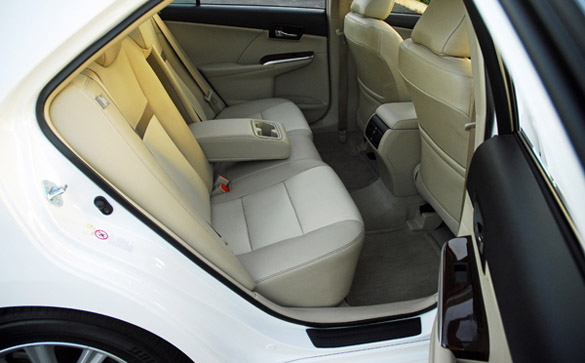 The all-new 2012 Toyota Camry has been redesigned inside and out with an adept accolade to its followers and future buyers. In no way does the new 2012 Camry really depart from its roots, which is a good thing considering its historic sales figures. 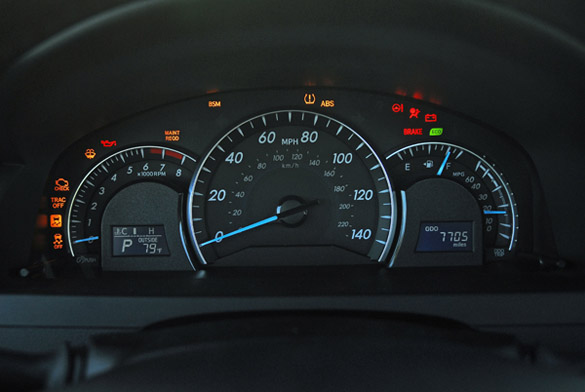 Being that there is an abundance of competition within the mid-sized sedan segment, the 2012 Toyota Camry must place a firm grip on its #1 sales crown. Offering drivers with a nice blend of luxury, bold styling and a powerful yet efficient V6 engine, the 2012 Toyota Camry V6 trim begs to be the best Camry yet.