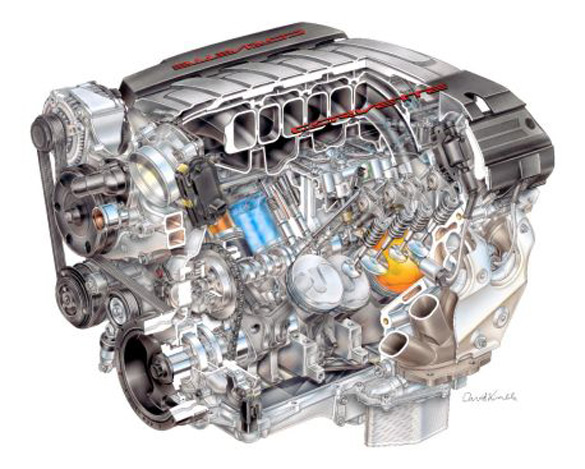 Just after Chevrolet released a teaser video of the upcoming Corvette C7, they release details today of what will sit at the heart of the new Vette propelling the completely newly redesigned sports car by the rear wheels. The new C7 Corvette will be powered by (for starters) a 6.2-liter V8 pumping out 450 horsepower and 450 ft-lbs. of torque while getting a 0-60 time of 4.0 seconds (or better). The new engine, dubbed LT1, will be the first of the generation 5 family of small block engines with many new technological advancements and active fuel management. The new Corvette is expected to get more than 26 mpg making it the most fuel efficient Vette yet.

While all of the other fine details have yet to be revealed, we can expect a full run down come January when the completely new 2014 Chevrolet Corvette is revealed to the world at the North American International Auto Show. For now, we have included the latest press release from General Motors about the upcoming Corvette spilling just a few more details. Exciting stuff for the all-America sports car!

DETROIT – When the all-new 2014 Chevrolet Corvette arrives late next year, it will be powered by a technologically advanced, racing-proven 6.2L V-8 delivering an estimated 450 horsepower and helping produce 0-60 times in less than four seconds.

“Our objective for the development of the all-new LT1 was to raise the bar for performance car engines,” said Mary Barra, senior vice president, global product development. “We feel that we have achieved that by delivering a true technological masterpiece that seamlessly integrates a suite of advanced technologies that can only be found on a handful of engines in the world.

“What makes this engine truly special is the advanced combustion system that extracts the full potential of these technologies. The art and science behind that combustion system make the Corvette LT1 one of the most advanced V-8 engines in the world,” said Barra.

Output, performance, and fuel economy numbers will not be finalized until early next year, but the new LT1 engine is expected to deliver:

“The Holy Grail for developing a performance car is delivering greater performance and more power with greater fuel economy and that’s what we’ve achieved,” said Tadge Juechter, Corvette chief engineer. “By leveraging technology, we are able to get more out of every drop of gasoline and because of that we expect the new Corvette will be the most fuel-efficient 450 horsepower car on the market.”

“The Corvette LT1 represents the most significant redesign in the Small Block’s nearly 60-year history – building on its legacy to make one of the world’s best engines even better,” said Sam Winegarden, vice president, Global Powertrain Engineering. “More than just great horsepower, the LT1 has been optimized to produce a broader power band. Below 4,000 rpm, the torque of the Corvette LT1 is comparable to that of the legendary, 7.0L LS7 out of the current Corvette Z06. The LT1 is a sweetheart of a power plant and drivers will feel its tremendous torque and power at every notch on the tachometer.”

Increased power and efficiency were made possible by an unprecedented level of analysis, including computational fluid dynamics, to optimize the combustion system, the direct injection fuel system, active fuel management and variable valve timing systems that support it. More than 10 million hours of computational analysis were conducted on the engine program, including 6 million hours (CPU time) dedicated to the advanced combustion system.

Direct injection is all-new to the engine architecture and is a primary contributor to its greater combustion efficiency by ensuring a more complete burn of the fuel in the air-fuel mixture. This is achieved by precisely controlling the mixture motion and fuel injection spray pattern. Direct injection also keeps the combustion chamber cooler, which allows for a higher compression ratio. Emissions are also reduced, particularly cold-start hydrocarbon emissions, which are cut by about 25 percent.

Active Fuel Management (AFM) – a first-ever application on Corvette – helps save fuel by imperceptibly shutting down half of the engine’s cylinders in light-load driving.

These technologies support the all-new, advanced combustion system, which incorporates a new cylinder-head design and a new, sculpted piston design that is an integral contributor to the high-compression, mixture motion parameters enabled by direct injection.

The LT1 head features smaller combustion chambers designed to complement the volume of the unique topography of the pistons’ heads. The smaller chamber size and sculpted pistons produce an 11.5:1 compression ratio, while the head features large, straight and rectangular intake ports with a slight twist to enhance mixture motion. This is complemented by a reversal of the intake and exhaust valve positions, as compared to the previous engine design. Also, the spark plug angle and depth have been revised to protrude farther into the chamber, placing the electrode closer to the center of the combustion to support optimal combustion.

The pistons feature unique sculpted topography that was optimized via extensive analysis to precisely direct the fuel spray for a more complete combustion. The contours of the piston heads are machined to ensure dimensional accuracy – essential for precise control of mixture motion and the compression ratio.

The first Small Block V-8 debuted in the Corvette in 1955. It displaced 4.3L (265 cubic inches) and was rated at 195 horsepower, drawing air and fuel through a four-barrel carburetor. Five years later, V-8 power helped Corvette secure its first victory at the 24 Hours of Le Mans.

“The engine requirements for a production car and a race car are remarkably similar,” said Jordan Lee, Small Block chief engineer and program manager. “In both cases, you want an engine that is powerful and efficient, compact and lightweight, and durable. That combination is what made the original Small Block so successful. Today, the introduction of state-of-the-art technologies and engineering makes one of the best performance car engines in the world even better.”

As an example, the new LT1 engine is 40 pounds lighter than a competitor’s twin-turbo 4.4L, DOHC V-8 with similar output. That weight savings not only improves the Corvette’s power-to-weight ratio, but also contributes to a near-perfect 50/50 weight balance for enhanced steering response and handling.

The new LT1 is also four inches shorter in overall height than the competitive DOHC V-8. That also improves handling by lowering the center of gravity while enabling a low hood line – contributing to the Corvette’s iconic profile, as well as ensuring exceptional driver visibility.

The new LT1 is the third engine in the Corvette’s history to be so-named, with previous versions introduced in 1970 (Gen 1) and 1992 (Gen 2). All iterations of the LT1 – and all Small Block engines – have shared a compact design philosophy that fosters greater packaging flexibility in sleek vehicles such as the Corvette.

“The power and efficiency of the Small Block V-8 are hallmarks of Corvette performance,” said Lee. “But, the compact size and great power-to-weight are just as important for the overall driving experience. The all-new LT1 will play a huge role in making the all-new Corvette a world-class sports car, in terms of technology, performance, and refinement.”

Compared to the Gen 4 engine, the Gen 5’s cylinder block casting is all-new, but based on the same basic architecture. It was refined and modified to accommodate the mounting of the engine-driven direct injection high-pressure fuel pump. It also incorporates new engine mount attachments, new knock sensor locations, improved sealing and oil-spray piston cooling.

Standard oil-spray piston cooling sprays the underside of each piston and the surrounding cylinder wall with an extra layer of cooling oil, via small jets located at the bottom of the cylinders. For optimal efficiency, the oil jets are used only when they are needed the most: at start-up, giving the cylinders extra lubrication that reduces noise, and at higher engine speeds, when the engine load demands, for extra cooling and greater durability.

New, cam-driven fuel pump: The direct injection system features a very-high-pressure fuel pump, which delivers up to 15Mpa (150 bar). The high-pressure, engine-driven fuel pump is fed by a conventional fuel-tank-mounted pump. The direct injection pump is mounted in the “valley” between cylinder heads – beneath the intake manifold – and is driven by the camshaft at the rear of the engine. This location ensures any noise generated by the pump is muffled by the intake manifold and other insulation in the valley.

PCV-integrated rocker covers: One of the most distinctive features of the new engine is its domed rocker covers, which house the, patent-pending, integrated positive crankcase ventilation (PCV) system that enhances oil economy and oil life, while reducing oil consumption and contributing to low emissions. The rocker covers also hold the direct-mount ignition coils for the coil-near-plug ignition system. Between the individual coil packs, the domed sections of the covers contain baffles that separate oil and air from the crankcase gases – about three times the oil/air separation capability of previous engines.

Intake manifold and throttle body assembly: The LT1’s intake manifold features a “runners in a box” design, wherein individual runners inside the manifold feed a plenum box that allows for excellent, high-efficiency airflow packaged beneath the car’s low hood line.

Acoustic foam is sandwiched between the outside top of the intake manifold and an additional acoustic shell to reduce radiated engine noise, as well as fuel pump noise.

The manifold is paired with an electronically controlled throttle, featuring an 87mm bore diameter and a “contactless” throttle position sensor design that is more durable and enables greater control.

Cooling system, humidity sensor and more: Additional features and technologies of the Gen 5 Small Block include:

General Motors’ investment in the Gen 5 Small Block will create or retain more than 1,600 jobs in five North American plants, including Tonawanda, New York, which recently received upgrades to support its production.

Founded in 1911 in Detroit, Chevrolet is now one of the world’s largest car brands, doing business in more than 140 countries and selling more than 4 million cars and trucks a year. Chevrolet provides customers with fuel-efficient vehicles that feature spirited performance, expressive design and high quality. More information on Chevrolet models can be found at www.chevrolet.com.