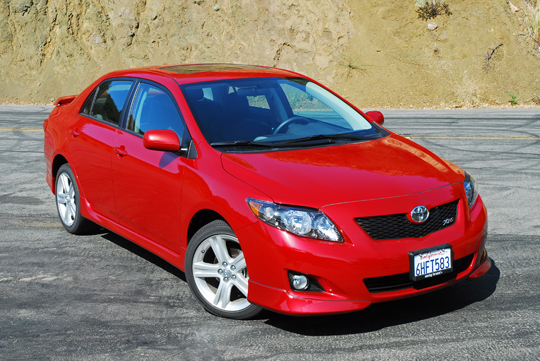 “THE BEST SELLER GETS BETTER”

The compact sedan segment of automobiles continues to be a big seller and the best-selling model is and has been the Toyota Corolla.  Forty years after Toyota introduced the first Corolla to American drivers, the all-new, 10th generation Corolla again provides customers with a high-quality, high-MPG choice with a low base price of just $16,100.00. 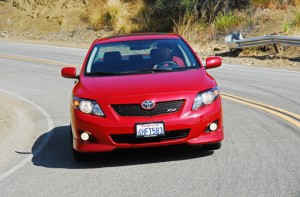 Corolla has long been synonymous with Toyota quality, style and value, earning a distinction of one of the most trusted cars in America.  Virtually every aspect of the car has been improved in the new model, offering more safety features, comfort and performance while still returning up to 35MPG in highway driving.  Since 1966, more than 30 million Corollas have been sold worldwide.  I tested the ‘top-of-the-line’ XRS model and was impressed with the styling, performance, comfort and long list of standard features and safety systems.

The 2009 Corolla is offered with a choice of fuel-efficient four-cylinder engines, a new 1.8 liter and a re-engineered 2.4 liter.  The Corolla standard LE and XLE are equipped with the new 1.8 liter DOHC 4-banger which produces 132hp at 6,000rpm and 128lb.ft. of torque at 4,400rpm.  Dual VVT-I controls valve timing on both intake and exhaust camshafts to help optimize performance and fuel economy.  Internal components are optimized to reduce friction, while valve-train components are downsized to provide a compact valve layout. 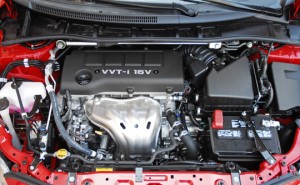 The sporty Corolla XRS that I tested comes exclusively with the 2.4 liter four-cylinder engine.  Every engine part was changed to reduce friction and ensure smooth and quiet operation.  The 2.4 liter produces 158hp at 6,000rpm and 162lb.ft. of torque at 4,000rpm.  a balance shaft suppresses vibration, and oil jets help piston cooling.  The exhaust system is engineered for reduced backpressure and improved performance.

This high-output engine is mated to a standard five-speed manual or an optional 5-speed automatic that uses the same engineering for its torque converter with flex lockup for increased fuel efficiency, as well as uphill/downhill shift control.  The five-speed automatic can also be shifted manually by moving the shift lever to the left from its ‘D’ position into the ‘S’ position, then pushing forward to upshift, and back to downshift.

I was impressed with the power and smooth, quiet ride just cruising on the freeway or on crowded city streets. 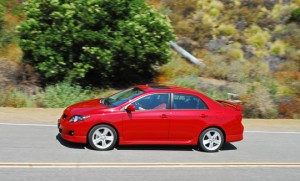 The 2009 Corolla is built around a stiff body structure that relies on high-tensile-strength steel, gussets and crossmembers for it strength, rigidity and lightweight construction.  Front suspension is by compact, rigid L-arm-type MacPherson strut with a stabilizer bar.  The Corolla XRS is equipped with a front sport strut tower brace as well to give even quicker and more confident handling capabilities.  The Corolla’s torsion beam rear setup employs a coil-over shock arrangement and stabilizer bar that allows efficient packaging along with secure handling and outstanding ride comfort with excellent control when cornering.

Quickly slowing the Corolla down from speed are large, 4-wheel disc brakes with ABS, EDB and Brake Assist.  Up front are 10.8in. vented discs and 10.2in. solid discs in the XRS model.  A new rack & pinion steering assembly is lighter and more rigid than before.  An electric power-assist steering system uses a compact motor, speed reducer and torque sensor built into the steering column.  The system varies the amount of assistance according to engine rpm and vehicle speed.  I found the new system to be a perfect blend of boost as the wheel was weighted just right at speed when turning and lighter when maneuvering in parking spaces. 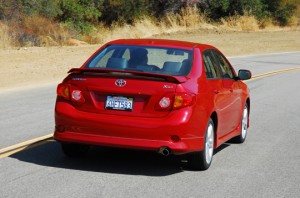 Electric power steering is the future as it reduces parasitic losses to the engine, thereby aiding fuel economy.  It is also environmentally efficient because it does not require hydraulic oil.  Additionally, a direct tire pressure monitor comes standard on every Corolla.   The standard equipment sounds like it is a more expensive vehicle. 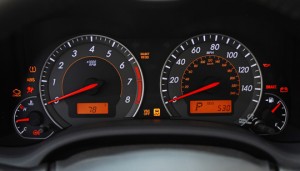 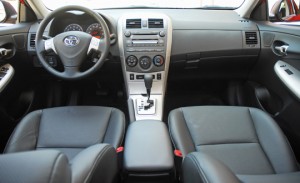 Options available on standard Corolla include cruise-control, AM-FM-CD changer with MP3/WMA playback capability, satellite radio, and six-speakers, and an all weather guard package.

In the XLE, you can add a tilt and slide sunroof, VSC with TRAC and off switch, 16in. alloy wheels with 205/55R16in. tires, plus a JBL audio system with AM-FM-CD changer with MP3/WMA playback, XM satellite radio and eight speakers.  All audio systems have an auxiliary audio jack and automatic sound levelizer which adjusts volume levels according to vehicle speed.  An optional navigation system for the XLE, a first for Corolla, features a large, easily visible screen.

Options for the S grade include an available power package, sport package, and leather-trimmed seats, steering wheel and shift knob.  The XRS can be equipped with the S-option packages as well as the JBL audio system, navigation system and XM satellite radio with NavTraffic capability.  Leather-trimmed seats, steering wheel and shift knob are also available in the XRS grade.  The only option that my XRS test Corolla didn’t come with was the navigation system but I felt that this model was approaching more expensive luxury status with all of the other options. 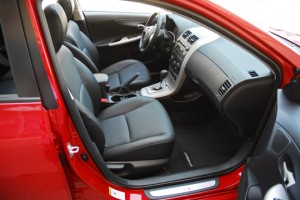 The new-generation Corolla’s design, created with input from styling studios in Turin, Italy, strikes a decidedly sportier profile than before while maintaining the exterior footprint and interior roominess of the previous model.  The Corolla provides room for five, and its trunk can hold four golf bags.  The new-generation Corolla is less than 1/2in. long, less than 2.5in. wider, and approximately 1in. shorter on the same 102.in. wheelbase.  The new wider stance improves looks and enhancing cornering.

The sporty profile is the result of pulling the A-pillar forward and the C-pillar rearward, which also enhances aerodynamic performance for optimal fuel efficiency.  Character lines sweep front the hood toward the A-pillars and carry back from the top edge of the front bumper into the subtle yet muscular front-fender flares.  Other character lines carry rearward at the level of the door handles, emphasizing the Corolla’s low profile, and sweep down from the C-pillar and along the top edges of the rear fenders.

Just below the dense mesh grille that helps form the now familiar Toyota T-face, and interlayer of anti-chipping coating is used to help minimize paint damage from stone chips.  Below the grille, a low air intake emphasizes the car’s greater width.  The side-view mirrors are larger for improved visibility; heated side-view mirrors are optional. 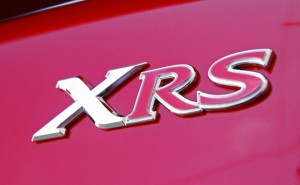 The standard body-kit on the S and XRS models give a sportier look while also enhancing aerodynamics.  The kit includes a front spoiler, rocker moldings, upper and lower rear spoilers, and for improved air management under the car, engine undercovers.

Toyota designers focused much attention on reducing wind noise, a top demand for customers in all segments today.  The A-pillar is specially profiled for this purpose.  The windshield is made from acoustic glass and the window frame structure is designed to reduce vibration of side glass.  The new windshield molding, wiper blade covers and shape of the cowl air intake louvers are all designed to minimize noise.  Windshield washer nozzles are partially shielded by the rear edge of the hood, instead of atop the hood or cowling.  Inside, the carpeting is designed to better absorb noise.  I wouldn’t have thought that the Corolla engineers and designers would have spent so much time decreasing the noise levels on an entry level vehicle.  That’s attention to detail. 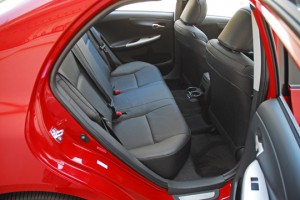 The new Corolla maintains similar comfortable headroom, legroom and shoulder room of the previous model, but is redesigned to provide improved comfort, usability and storage.  The new driving position is tailored to a wider range of driver heights than before.  A tilt-telescopic steering wheel in all models makes it easier for taller drivers to find a comfortable position.  Reshaped front seats improve comfort and lateral support and are integrated to accommodate a greater range of occupant heights.

The double-browed instrument cluster bezel contains tachometer, speedometer, engine coolant temperature and fuel gauge.  The speedometer contains a digital odometer/trip meter and shift indicator.  Toyota’s Optitron gauges, which are illuminated with bright white light and red needles, are featured on the XLE and XRS.  Gauges on the other models have red needles illuminated with amber light.  The center stack has big, easy-to-use dials and buttons for all your needs.  In addition to the basic three-spoke steering wheel, there are two optional wheel types, a three-spoke leather-trimmed wheel with audio switches, and that same wheel with both audio and cruise-control switches. 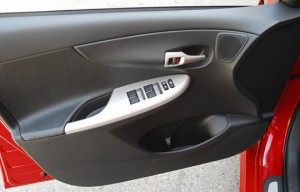 A variety of useable, easy-to-reach storage spaces add convenience and usability inside the Corolla.  These include a center console side pockets, a storage box above the usual glove box, front and rear door pockets that can safely hold 20oz. bottles, a console box with a large-capacity main tray and a smaller accessory tray, an overhead console useful for storage of sunglasses or garage-door openers, and a rear-seat center armrest with an integral drink hold.

I was totally impressed with the quiet ride, performance, attention to detail and long list of standard equipment that came with the Corolla XRS.  This should help maintain the Corolla’s lead in sales because you so much value for your money.  Starting prices for the LE model starts at $16,100.00 while the loaded XRS model that I tested was stickered at just $25,534.00 including delivery.