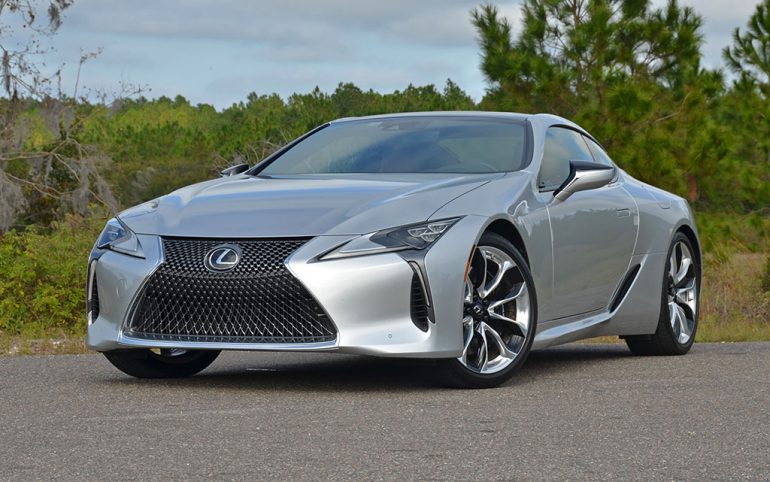 For as long as they have had the pulse of America’s mainstream automotive luxury market, Lexus has placed themselves into a position to captivate the masses on many demographic levels. Entering a foray of new luxury heights, ones that companies like Mercedes-Benz and BMW have captured with repeated buyers, Lexus gets their hands into the mix of a unique segment that the all-new LC 500 attempts to define on its own. After a week with the new LC 500, I am proudly confident that Lexus isn’t afraid to take bold steps to garner additional excitement and expectations to expand upon their methodical luxury branding deep into the luxury automotive market. 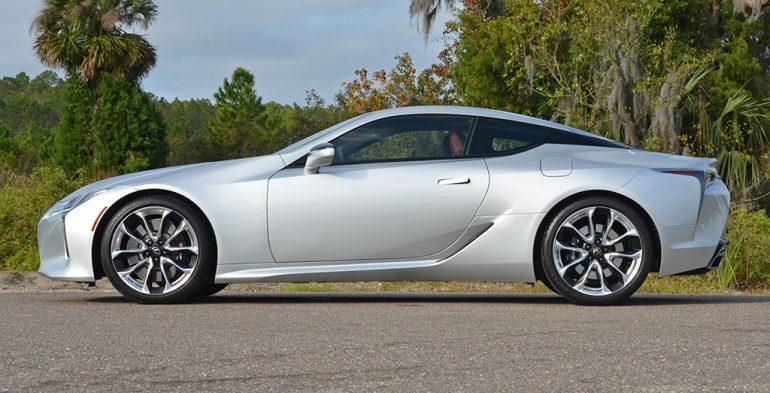 The 2018 Lexus LC 500 is undoubtedly one of the mostly boldly designed cars in the past decade, especially when you consider the conservatively-designed roots of the Lexus brand as a whole. The LC 500 takes many design characteristics from the LFA supercar once touted as one of the best-sounding exotics of its time sporting a Yamaha-tuned V10 engine. While in the eye of many hardcore enthusiasts the LC 500 is far from the supercar nature that the LFA instilled in onlookers, the LC 500 holds its own to bring forth a design that doesn’t depart too far from the stunning and eye-popping LF-LC concept car that many of us salivated over during its introduction. Taking such a notion further, enthusiasts have had their say about the LC 500’s performance, which is bolstered by naturally-aspirated 5.0-liter V8 with 471 horsepower and 398 lb-ft of torque. The beefy V8 comes from Lexus’ stash found in the RC F and GS F, which has been one of my favorite powerplants in its consistent and smooth power output. 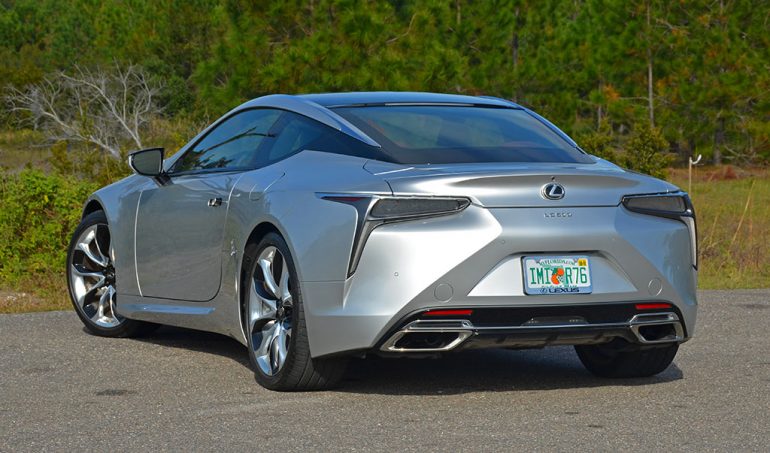 In the endearment of what the LC 500 is, I wholehearted believe that Lexus never intended for the LC to be considered an extreme sports car. Instead, the LC is a grand tourer that beckons to appease the luxury buyer looking for a rolling styling statement good for leisure trips and light canyon carving on the way to an exclusive destination.

Evidence of the Lexus LC 500 being more on the side of a wildly designed grand tourer is apart from its 2+2 seating configuration, is the LC’s reserved performance. Much of what makes the LC 500 conform to the Lexus branding in the way it drives is there’s nothing overly shocking about its mannerisms, which is a good thing considering the target demographics for Lexus. While there are many characteristics of the LC that places it in a category above your ever-day luxury sports coupe, it still retains civility in its 471 horsepower and low-slung design. The engine mated to a 10-speed automatic transmission makes for an enjoyable experience on the road hardly ever taxing the engine in most legal driving situations. Getting up to 60 mph is a consistent method taking about 4.4 seconds. Oddly enough, edging out the performance of the LC 500 you will only take advantage of the first four gears, which prove that the rest of the gearing is more suited for a luxury and appeasement of the eco-friendly mindsets of some. Still, the LC 500 only gets 26 mpg on the highway, which I would say remained consistent throughout my week with Lexus’ midsized luxury sports coupe. 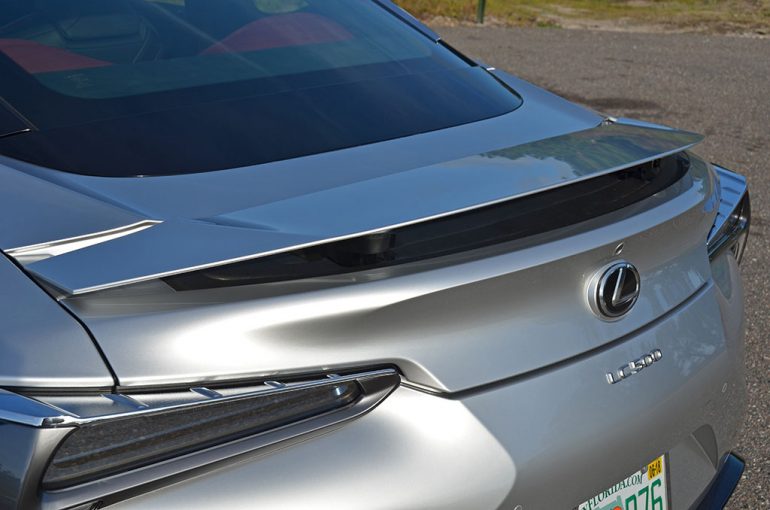 Where the LC 500 shines for enthusiasts is the steering, which is rather sharp and quick. Thanks to rear-wheel-steering, which angles the beefy rear 275/35RF21-inch tires a couple of degrees in the opposite directions at lower speeds, the LC turns in excellent. In fact, the rear steering feels as if the wheelbase of the LC has shrunk enabling you to maneuver around bends with ease and fit into tight parking areas without worry. While the LC 500 touts a portly body weight, tipping the scale to nearly 4,300 pounds, it feels as if it is much lighter allowing both the adaptive dampers and rear steering aid to a nimble feel.

The adaptability of the LC 500 also places it in an area where it may appease a wider audience with its six drive modes, Eco, Comfort, Normal, Customize, Sport, and Sport+. With a Customize mode, the LC 500 can be setup to separate the damper setting from the transmission and engine’s aggressiveness. 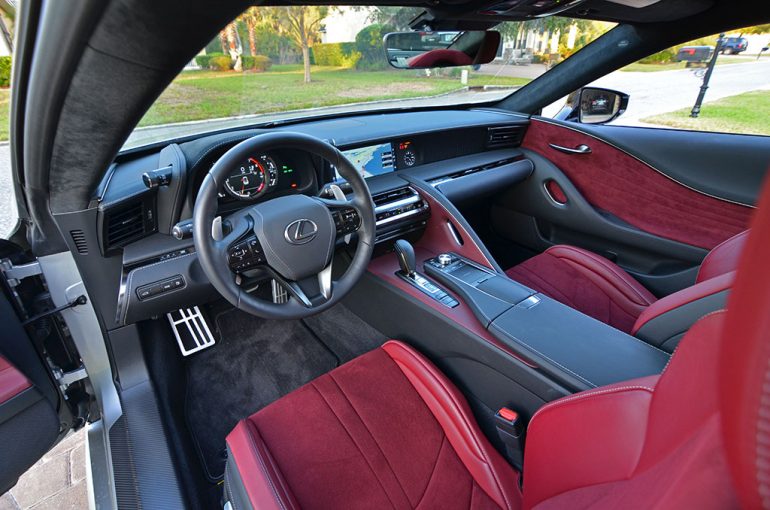 Completing a package for something that many in the Lexus camp may consider to be a true sports car with an initial appeal of luxury, the LC 500 sports large 6-piston caliper brakes up front clamping down on 15.7-inch two-piece ventilated discs and 4-piston in the rear biting down on 14.1-inch discs to bring the LC to a stop in 156 feet from 70 mph. The LC 500 also scores 0.93g on the skidpad, on average. 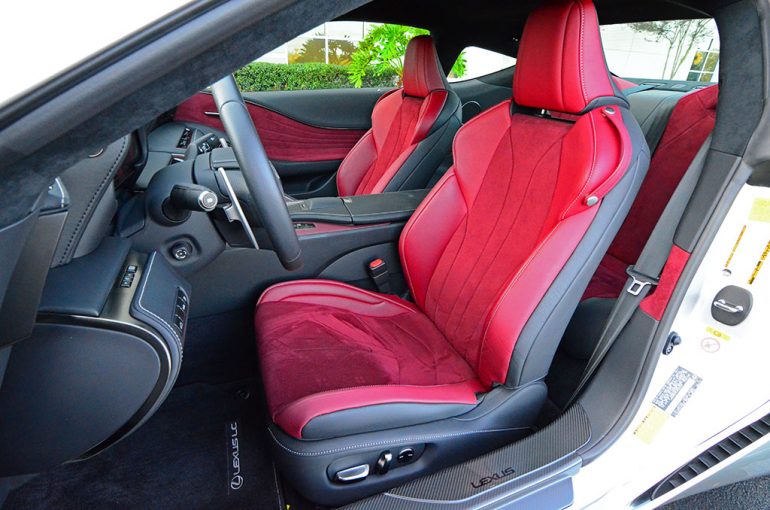 Keeping with a long-standing tradition of impeccable fit and finish, the LC 500 captivates such a lineage in the Lexus brand but takes things a step further with more concept-car-inspired interior designs. The many soft-touch materials used throughout all exude pure luxury without many faults. The only issue with the interior of the LC 500, other than the tight back seats being more reserved for additional luggage space instead of anything larger than a 5-year-old child, is the infotainment system. Unfortunately, Lexus still hasn’t wised up to what people really want in their interaction with today’s car tech and the use of the Remote Touchpad Controller isn’t it. The infotainment system, despite a beautiful 12.3-inch high-resolution screen, is cumbersome mostly counterintuitive especially during those times you wish to make a simple control change to your heated or ventilated front seats. Many of the vehicle controls and settings are hidden behind menu sets that cannot be accessed without distraction, which in my opinion goes against the grain for Lexus putting safety at the forefront of their inner workings and advanced safety tech. Instead of taking an old page out of their touch-screen playbook from many years ago or one borrowed from new German vehicles offering both central controllers and a new touchscreen, Lexus is virtually left behind. Hopefully, such faux pas within the infotainment system can be resolved – sooner rather than later, Lexus! 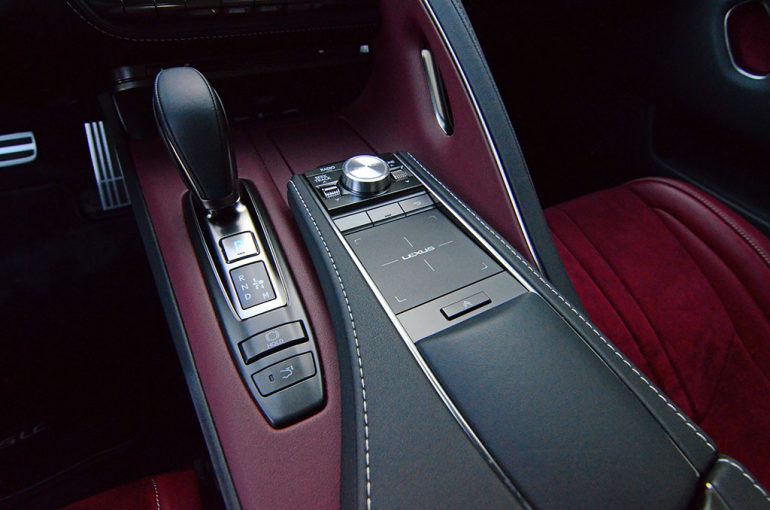 While there are many higher-powered vehicles in the niche segment that the Lexus LC 500 embarks upon to run with the likings of the outgoing BMW 6 Series Coupe, Mercedes-Benz S Class Coupe and their SL, the LC gets its merit from its stunning design and traditionalist Lexus qualities. Entering into such a mix is no easy feat, and in my opinion, Lexus has done justice to captivate a new audience and it will only get better from hear out. Here’s to hoping that the price of the new LC 500 starting at $92,000 and testing out on my loaded-up test vehicle at $105,375, puts the Lexus brand to garner wanted attention that they would otherwise never get. The LC 500 certainly has the looks, in addition to an intoxicating audible growl that can only be found in a naturally-aspirated V8 engine that has long been gone from much of the competition.