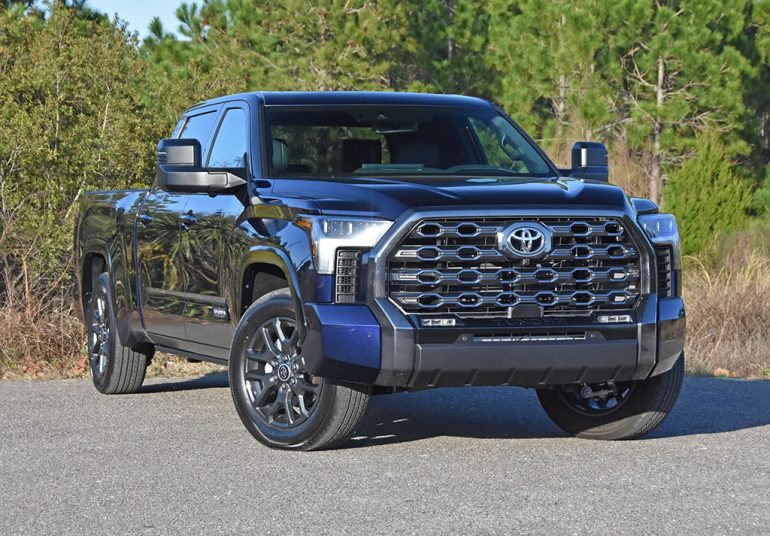 In the past, I’ve explained many times how Toyota’s methodical approach to updating their vehicles has done well for them considering how reliable and trusted the brand has been for countless years. To reiterate such a notion, the Toyota Tundra has gone 14 years in its second generation, and for the 2022 model year, it gets a full redesign marking the third generation of the full-size truck that is more poised to compete with the Ford F-150, Chevy Silverado/GMC Sierra, and RAM 1500.

The completely redesigned 2022 Toyota Tundra is a more refined truck that does away with the old V8 engine for a twin-turbo 3.5-liter V6 engine (i-Force) and a new hybrid V6 setup called the i-Force Max. The base engine, the new twin-turbo 3.5-liter V6 found in my Tundra Platinum trim test vehicle, touts improvements over the V8 in just about every area having a smooth delivery of its 389 horsepower and 479 lb-ft of torque in my test vehicle. Power is sent through a new 10-speed automatic transmission that feels mostly direct and does a good job of finding the proper gear without unnecessary shifting. 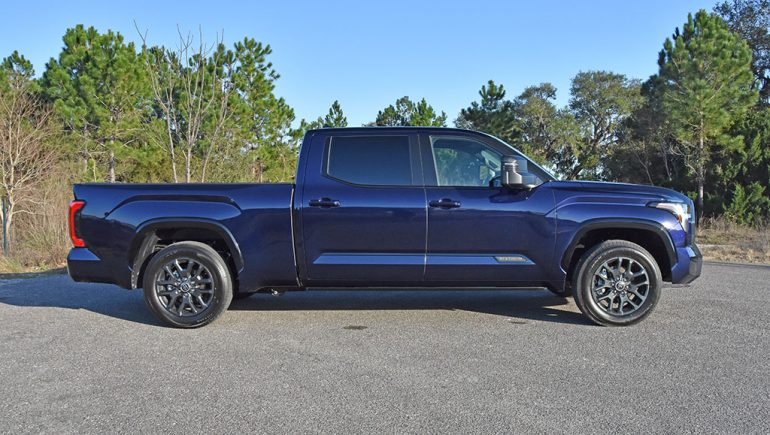 Fuel consumption is much improved as you would expect with the Tundra now getting 17 mpg city, 22 mpg highway, and 19 mpg combined in the 4×4 setup of my Tundra Platinum CrewMax long-bed test vehicle. If you opt for a two-wheel-drive model like the Limited CrewMax you’ll improve upon those fuel consumption figures to get 18 mpg city, 23 mpg highway, and 20 mpg combined. Where things start to get even better, at least during city driving, is in the hybrid trim Tundra models, which are currently designated for the two top trims of the Tundra TRD Pro and luxurious Capstone trim. The TRD Pro and Capstone trims get the hybrid powertrain with 437 horsepower and 583 lb-ft of torque and return 19 mpg city and 21 mpg highway for the TRD Pro and the same city mpg but 1 mpg better for the highway in the Capstone trim. The 1794 edition trim has the availability of selecting the hybrid powertrain or stick with the standard twin-turbo V6 as in my test vehicle. 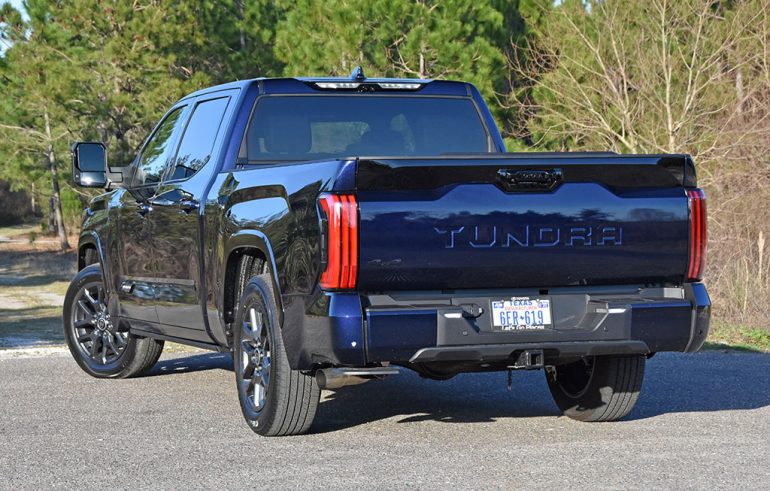 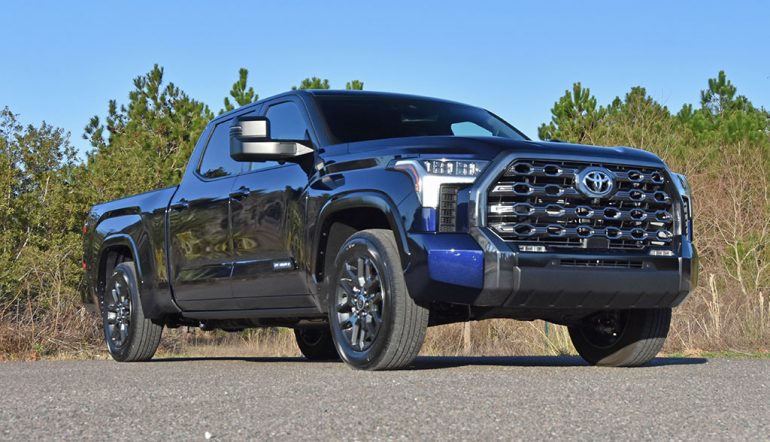 Toyota’s long-standing and proven reliability should translate well for the new 2022 Tundra as there’s a more refined package here with no rattles and an impeccable build quality inside and out. The ride of the new Tundra is smoother partly thanks to adaptive dampers, and the cabin is surprisingly quiet for a truck. Some of that quietness is thanks to the turbocharged V6 engine that doesn’t sound anything like the outgoing V8 but does have a neat growl that Toyota managed to conjure up from clever engineering. 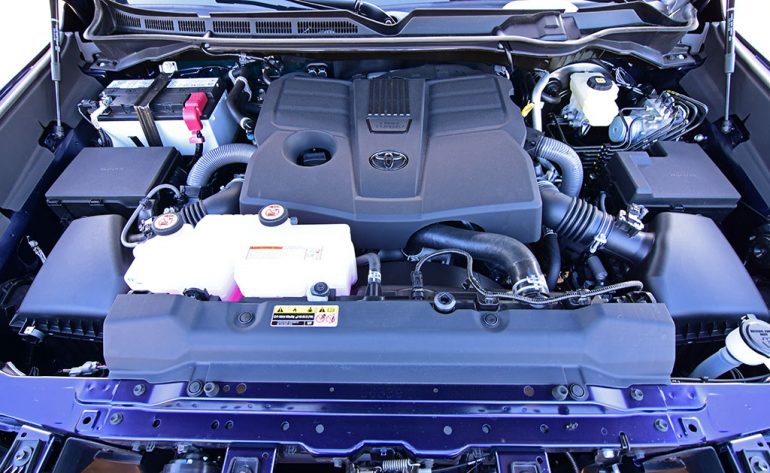 Power from the new engine comes on strong with ample torque and gets the vehicle moving well thanks to its slightly lighter curb weight over the outgoing model. I was able to make a few 0 to 60 mph tests and the best time came to 6.9 seconds. The mid-range power was the sweet spot for the turbo V6 and it never felt like it was lacking for its pulling power. For the most part, the new Tundra felt a little lighter on its feet versus the outgoing model and the braking feel is excellent with an initial grab that inspired some confidence in controlling the truck and bringing it to a safe stop. Overall, the braking pedal feel is the best I’ve experienced in this class of a truck. When stopped, there’s a new start/stop function that shuts down the engine if you apply enough brake pressure at the stop, but you can temporarily disable the feature (it will require disabling after a new initial vehicle startup). As a quick note, the new Tundra has available remote start through the Toyota app (paid service) but when you have the feature you can also remote start the Tundra by pressing the lock button three times on your key fob (without the paid-service). Though, the vehicle shuts off when you attempt to unlock the doors, which is strange. 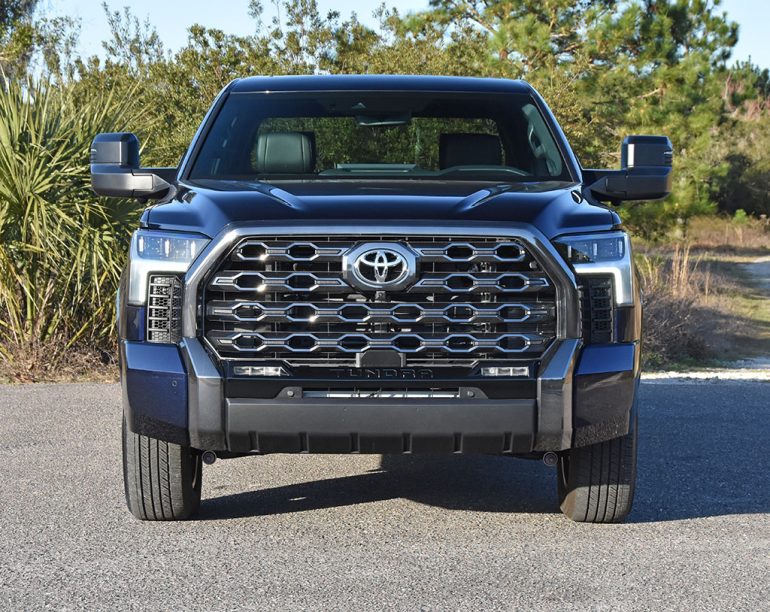 To heighten the Tundra’s place among the competition, there’s the availability of a rear load-leveling suspension system, which was equipped on my Tundra Platinum test vehicle. The lowering and raising of the rear does take some time to complete through the dash button but proves to be very beneficial for towing or hauling heavy items to prevent rear sag and potentially improve upon stability at speed. The overall look of my test vehicle seems to be a bit low even with the system set into the automatic mode at the normal ride height. If you need additional ground clearance outside of the new Tundra Platinum’s 9.4 inches, you’ll want to step up to the TRD Pro to get 10.9 inches. There’s also the availability of power tow mirrors found on my test vehicle that can be extended at the press of a button, which are already super huge and often create a small blind spot that you must be mindful when maneuvering. 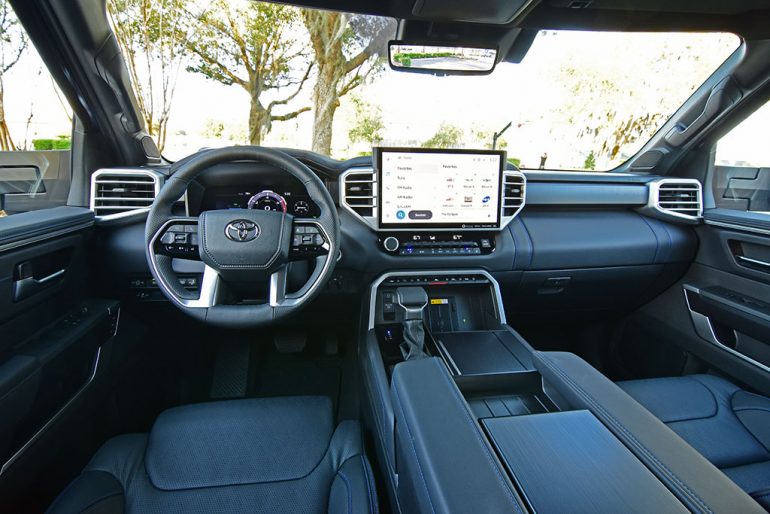 Inside of the new 2022 Toyota Tundra is a reworked cabin that takes things up a few notches for being more premium, especially in the upper trim levels like my Platinum test vehicle, and even more in the luxurious Capstone trim. There’s now a soft-touch dashboard and more soft-touch areas for the upper face of the dash. Bringing a central focus to the driver is a new instrument cluster that can be had in a fully digital 12.3-inch display giving you all pertinent vehicle information and a couple of customizable parts of the screen. There’s also a new 10-inch color heads-up display and a large 14-inch infotainment system that comes standard for the Limited trim and all higher trim levels in place of the standard 8-inch system in the lower trims. 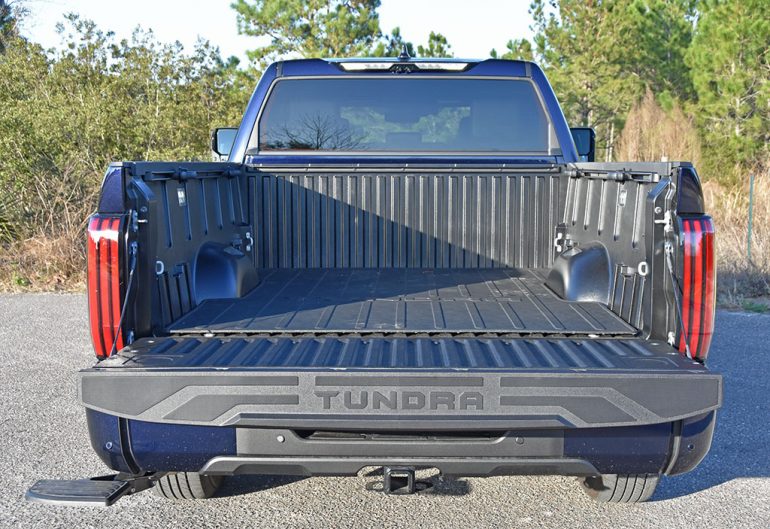 Toyota’s quest to match and somewhat surpass some competition pays off well with the new 14-inch infotainment system that now listens for more natural language commands starting with a prompt word of “Hey Toyota,” much like how other new systems from BMW and Mercedes-Benz prompt voice recognition commands. The new infotainment system is very responsive and has a short learning curve. However, the system has a lot of hidden features that usually present themselves at random through pop-up notifications, which can be somewhat of a distraction if you allow it. The system is very open and straightforward for its settings and expected over-the-air updates to keep it running with new integrations. There’s also wireless or USB-wired Apple CarPlay and Android Auto integration that works seamlessly during my experience with my iPhone 13 Pro. 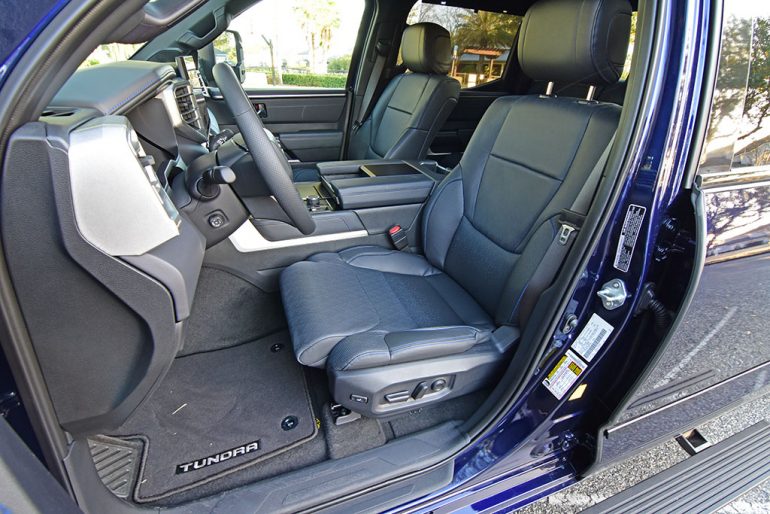 The seating arrangements are more comfortable than I remember in the outgoing model and there are additional subtle touches that make the interior feel premium, such as the accented stitching throughout the dashboard and seats, which are heated and ventilated up front as well as for the back outboard seats. The seating areas have plentiful space, and the rear seat still feels like a large couch and has large storage areas below the folding bottoms that is otherwise taken up by the hybrid battery in the TRD Pro or Capstone trims. 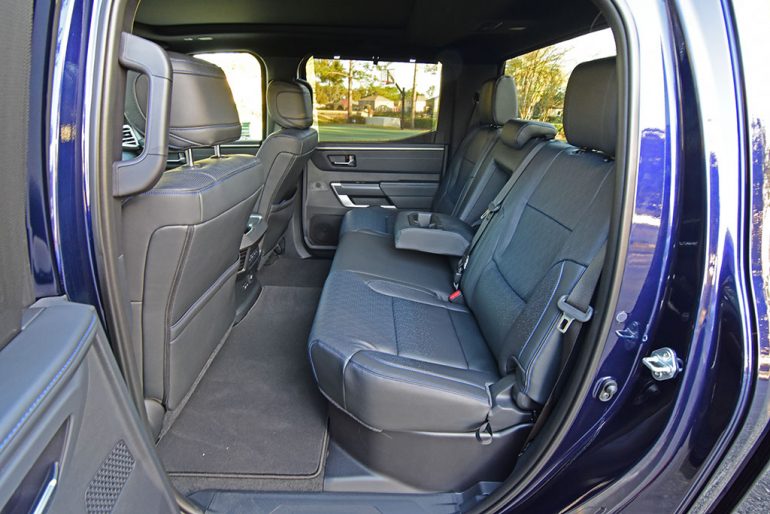 Toyota had to do something to update the Tundra and it was past time for a redesign. After upwards of 14 years of the same generation, the Tundra was old and fell behind the competition. In recent years the Tundra rested on its reliability factor but there were many areas in need of much improvement, which I believe the all-new 2022 model has addressed with a few interesting surprises like the offering of the hybrid powertrain in the upper two trim levels along with the eye-catching large-and-in-charge 14-inch infotainment screen. As far as looks, the new 2022 Tundra fits the proper part for having its unique character with its auto-highbeam LED headlights, LED foglights, and sequentially lit LED turn signals up front and out back. What is missing, in my opinion, is something extra for the tailgate that is otherwise “normal” but has a power-retractable footstep for easy access to the composite-lined truck bed and a quick power-release button on the driver’s side taillight. Also, there are no tow hooks available that I know of in any trim level. 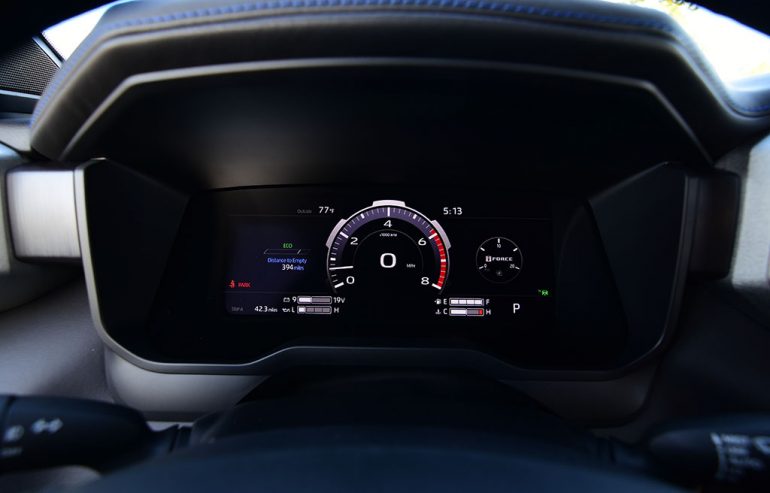 As expected, there’s a bevy of active safety features for the new Tundra with Toyota’s Safety Sense 2.5 package being standard across the board, which includes pre-collision warning with automatic emergency braking, adaptive cruise control, and a lane-keeping system. The additional safety features, such as the blind-spot monitor with rear cross-traffic alert, are standard starting with the Limited trim. The Platinum trim adds a 360-degree camera system and a trailer backup guide system.

At a starting price of $35,950 for the base Tundra SR Double Cab 4×2 trim, the new 2022 Toyota Tundra is a respected value. The pricing scale quickly catches up with the competition as you go higher into the trim levels where the Limited starts at $46,850 and my Tundra Platinum CrewMax 4×4 with the 6.5-foot bed, leveling suspension, the power running boards, and power tow mirrors, tests out at $63,939. At the top end of the spectrum, the new Tundra TRD Pro starts at $66,805, and the Tundra Capstone at $73,530, which are both hybrids. 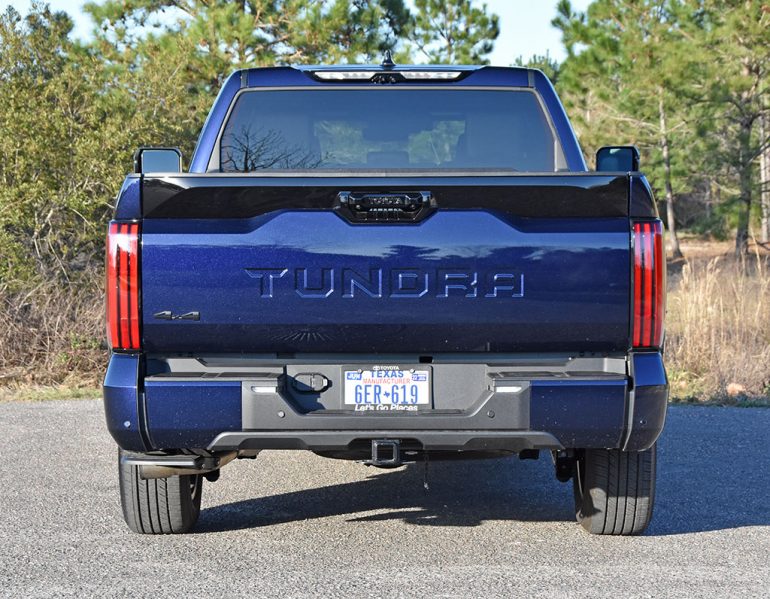 At the end of the day, the new 2022 Toyota Tundra, proudly made in Texas, will continue to keep its fan base proud and quite happy with all the improvements, even if there’s no longer a gas-guzzling V8. As far as winning over those who currently own competitors or newcomers, the new Tundra will do just fine to capture some who may have had a bad experience or are curious on how well the Tundra may impress them because it’s from an Americanized brand with an unsurpassed history of reliability.