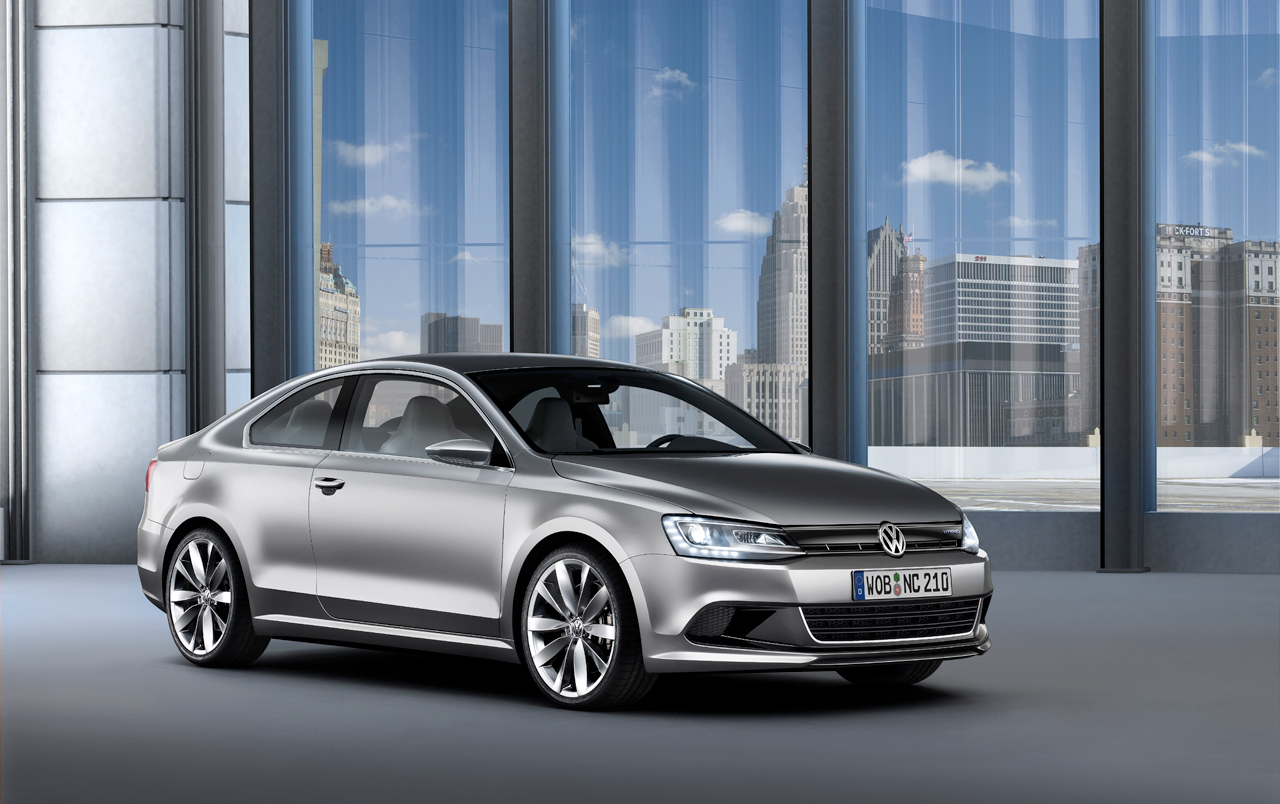 What you see here is probably the next best thing to the Scirocco for America to get from Wolfsburg’s Volkswagen design group, the NCC. Essentially this new VW compact coupe is a two-door version of the Jetta.

Shown here are newly released photos of a new Volkswagen Compact Coupe Concept debuting at the Detroit Auto Show. Slated as a 2011 model, the “VW Jetta Coupe” will be competition for Nissan’s two-door Altima, and the Honda Accord Coupe.

The 2011 VW NCC concept is basically “all-Jetta” in the form that it has virtually the same dimensions as the Jetta with the exception of the wheelbase. A new addition for the coupe will be a hybrid version right after the announcement of the VW Touareg hybrid which should be the same powertrain design. Speaking of powertains, the 2011 Volkswagen Jetta Coupe or New Compact Coupe (NCC) as described on the floor of the Detroit Auto Show, will have an available a hybrid system composed of a 20-kilowatt electric motor between a 1.4-liter TSI 4cyl gas engine and 7-speed DSG dual clutch transmission. The system will incorporate electric boost, regenerative braking and a decoupling of the transmission when coasting to accomplish between 45 to 56 miles per gallon while zipping to 60mph from a standstill in 8.1 seconds and a top speed of 141mph.

View the full press release on the Volkswagen NCC below.

Wolfsburg / Detroit, 11 January 2010 – For Volkswagen this marks the beginning of an action-packed year, in which more new models will be introduced than ever before in the company’s history. Number 1 on the spectacular list of new products for calendar year 2010 is a car based on entirely new concepts and technology, a coupe with a hybrid drive that is extremely fast and yet futuristic in its fuel economy. It has sports appeal and sharp styling yet is remarkably elegant – positioned between the Europe’s bestselling sports car, the Scirocco, and the internationally successful CC. Its name: the New Compact Coupe. Site of its world premiere: Detroit, North American International Auto Show (January 11 to 24). Combined fuel consumption: 4.2 l/100 km* (45 mpg**)! CO2 emissions: 98 g/km! Incredible, considering its fuel economy, are its top speed of 227 km/h (141 mph) and the short 8.6 seconds it needs for the classic sprint to 100 km/h (0-60 mph in 8.1 seconds).

These values were made technically feasible by a high-tech alliance: a TSI engine (gasoline powered with 110 kW / 150 PS) that is as fuel efficient as it is sporty, an electric motor (20 kW / 27 PS) and a 7-speed Direct Shift Gearbox (DSG) – which in the eyes of many car drivers is the best automatic in the world today. Just over a month after the debut of the most fuel-efficient four-seater in the world – the Up! Lite in Los Angeles – this new concept car confirms once again that future Volkswagen hybrid vehicles will not only focus on fuel economy, but – similar to pure gasoline and diesel versions of Europe’s most successful automobile brand – will also aim to be sporty and fun to drive. In the first half of the year, Volkswagen will launch its first hybrid model on the market under the VW label – an SUV with full-time all-wheel drive. Meanwhile, the New Compact Coupe shows, both technically and visually, how Volkswagen envisions a front-wheel drive hybrid for the compact class that would be implemented when the time is right.

Downsizing at its best: The concept car is driven by an extremely innovative high-tech alliance that closely approximates potential production versions. Volkswagen is using a four-cylinder version of the TSI gasoline engine range here. Direct injection, turbocharging and intercooler generate a power of 110 kW / 150 PS from just 1.4 liter of engine displacement – downsizing at its best. TSI technology has impressively demonstrated its extreme durability in many car racing events; including on the legendary Nordschleife of the German Nürburgring – the most demanding race course in the world. Since the first TSI engine was introduced just over five years ago, 3,5 million units of these boosted and torque-strong four and six cylinder engines have already been installed in vehicles. The TSI of the NCC – which of course is also equipped with ESP – transfers a hefty 220 Newton-meter (177 ft-lb) of torque to the front wheels at low engine speeds.

Emissions-free by E-motor: And there is even more power: An electric motor is integrated between the TSI and the efficient 7-speed automatic (DSG = Direct Shift Gearbox); it can be used for pure electric emissions-free driving, or it can support the TSI with aggressive torque. The electric motor develops a power of 20 kW / 27 PS. The power and torque of the two drive units supplement one another during what is known as boosting – when accelerating to pass, for example. Since the NCC can also be driven in a pure electric mode, the drive system is classified as a Full Hybrid. A lithium-ion battery (1.1 kWh) at the rear of the vehicle supplies the electric motor with energy. By the way, in electric mode the TSI is not only shut off; it is also disengaged by a clutch to avoid drag losses.

Frequently coasting: As soon as the driver releases the gas pedal, the TSI is disengaged from the transmission. This so-called “coast-down” is even possible at higher speeds, as in freeway driving. Since drag losses are eliminated here too, the NCC coasts for a very long time. And this promotes an anticipatory style of driving that leads directly to reduced fuel consumption.

Recovering kinetic energy: In braking, the electric motor – now operating as a generator – recovers kinetic energy which is then stored in the lithium-ion battery. Of course, just like the new BlueMotion models from Volkswagen, the New Compact Coupe also has a Stop-Start system on board. This reduces fuel consumption, especially in urban areas and in stop-and-go traffic.

The unique interplay of efficiency and dynamics is reflected 1:1 in the styling of the coupe that is painted in “Tungsten Silver Metallic”. Klaus Bischoff, Chief Designer for the Volkswagen Brand, comments: “Styling of a coupe is considered the ultimate in automotive design. Our team has achieved a symbiosis of efficient technologies and elegance in the New Compact Coupe that is unique in its expression. Just a few precisely placed lines and powerfully sculpted surfaces have created a timeless dynamic and purist elegance that is typical of Volkswagen.”

Front end – Showing a strong face: The front of the New Compact Coupe shows an extremely confident and focused expression. Moreover, the car’s width is emphasized by the horizontal line styling with integrated Bi-Xenon headlights – including LED daytime running and turn signal lights. The technically complex headlights contribute to unmistakable visual recognition of the concept car – both day and night.

Side view – A sharp profile: In the car’s side profile, styling properties characteristic of all new Volkswagens of the past year have been merged with elegant and yet sporty coupe features, resulting in a new interpretation of the design DNA. The best examples of this are the characteristic tornado line and the powerfully emphasized curves of the wheel arches. They intersect the main volume of the large, homogeneous surfaces, conveying a powerful dynamic. The image of the side windows rounds out this impression with a concise signature. Forging a stylistic bridge to current models are the 19-inch “Lugano” type alloy wheels.

Rear – A strong concluding statement: The cargo area of the New Compact Coupe is decidedly powerful in design. Clean surfaces and a muscular shoulder section dominate the image here too. Bright: the LED taillights. A spoiler lip that reduces air turbulence was styled into the top of the trunk lid; it further improves the car’s remarkable aerodynamics. At the bottom there is a stylized diffuser; the tailpipe of the exhaust system is embedded here for a positive aerodynamic effect.

Showing its true colors: The NCC is a four-seater with exceptional long touring comfort and generous occupant space on sport seats that are upholstered in a light-colored (“Berry White”) leather. Also designed in this color are the lower cockpit area, parts of the center console and the door trim panels. By contrast, all other surfaces (except accents and controls), including the leather-trimmed steering wheel, are styled in the darker “Grigio Quartz” color.

In its interior, the Volkswagen offers the best feeling of spaciousness in its class. This means that despite the sporty low body height, the car offers ample head room (front and rear) as well as leg room in the rear. The coupe’s 380 liter trunk can handle luggage for four persons without any problem.

Climb in, buckle up, drive away: As soon as the doors of the concept car are opened, a reason for the Volkswagen brand’s tremendous success is revealed: unparalleled perfection in details and intuitive operation. The instruments are laid out ideally. The new multifunction sport steering wheel is the key interface between human and machine. The right hand rests naturally on the gearshift lever of the 7-speed DSG‚ and in front of it the control panel sports newly designed controls for the automatic climate control system (Climatronic), the 8-inch touchscreen for the radio-navigation system – also a new design – and at the top of the panel the hazard flasher switch and center air vents. The center console’s control panel is angled slightly toward the driver to perfectly align the cockpit to the driver’s needs. Also optimally laid out for viewing are the round instruments with their chrome bezels; the multifunction display (trip computer and additional navigation display) is placed between them.

Upgraded with metal surrounds are all air vents, multifunction keys on the steering wheel, radio-navigation system, climate control, DSG gearshift unit, white accents of the door trim and instruments and switch panels (window lift and mirror adjustment) in the doors.

Individual seats in the rear: Designers have shaped the rear seating area in the style of large Gran Turismo cars. Passengers sit on two comfortable sport seats here. Between them is the continuation of the center console that passes through the entire interior. In the rear, the center console is equipped with additional storage space as well as climate controls and a fold-out center armrest. The finish and quality of materials in the interior make viewers forget completely that the New Compact Coupe is still a concept car. And that too is typical Volkswagen – no compromises.

What is your take on this car? Is this the new “Poor-Mans” Audi A5? Post your comments below!