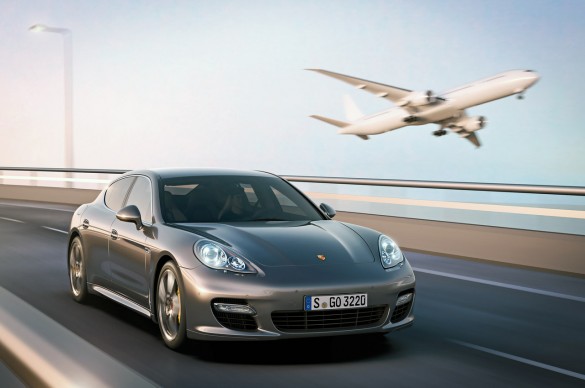 Harlan Ellison, the reclusive but brilliant science fiction writer, once penned a story called “How’s The Nightlife On Cissalda?”. Like most of his work, it baffled many, offended some and amused the rest of us. I can’t possibly do the story justice here, but let’s just say the issue of appearance versus performance factors heavily into the tale. If something is so good at what it does that it touches a place in your very soul, do you really care what it looks like? That question haunts me when it comes to the Porsche Panamera. As GT cars go, the Panamera is among the best, particularly when you get to the cost-be-damned Panamera Turbo. If you routinely haul three other passengers from coast to coast at speeds that would have made Brock Yates in his prime pucker, the Panamera Turbo is perhaps the best choice for performance, comfort and handling. Even the Cadillac CTS-V doesn’t come close, particularly for rear seat passenger comfort. Sure, on a racetrack the CTS-V can hold it’s own against the Panamera Turbo, and the Caddy costs half as much as a Panamera Turbo, but the Porsche offers a level of refinement that the Caddy lacks. If you’ve got the bank account to afford either, some serious test driving was required to decide which GT sedan is the best option for you. Until now. 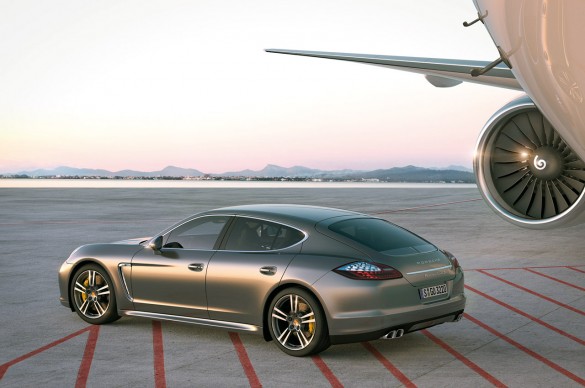 Porsche has announced a new Panamera variant called the Turbo S. As you can guess, the Turbo S adds more horsepower and torque, courtesy of a re-mapped ECU and improved turbochargers. The changes are good enough for a 10% boost in horsepower, giving the Panamera Turbo S 550 hp to the Turbo’s 500 hp. Torque also gets a boost from 516 ft lb to 553 ft lb, but thanks to Porsche’s “overboost” function (offered with the Sport Chrono Package), the Turbo S can temporarily deliver up to 590 ft lb of torque for passing more pedestrian sedans. Porsche is proud of the Panamera Turbo S’ fuel economy as well: in EU testing with standard tires, the car returned up to 20.39 MPG. Opt for the all season, low resistance tires and fuel economy gets a bump up to 20.74 MPG. 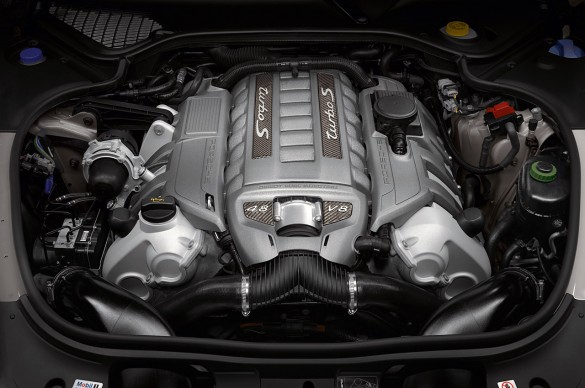 On the outside, the Turbo S gets 20 inch Turbo II wheels, a wider rear track, side skirts and a four-position rear spoiler. Inside, the Turbo S comes with two tone leather seating in either black and cream or in gray and cream. Pricing has been announced for the German market, where the Turbo S will start at the equivalent of $253,502. On this side of the pond, pricing will start somewhere around the $173k mark. If you’ve got the finances, the Turbo S may be the world’s best GT sedan.

Porsche will reveal its most powerful Panamera for the first time in North America on April 20, 2011 at the New York International Auto Show.

The engine in the new top-of-the-line Panamera is based on the already proven and powerful twin-turbocharged V8 engine in the Panamera Turbo. The 4.8 liter, V8 engine in the Turbo S achieves a maximum output of 550 horsepower, which is 10 percent more than the 500 horsepower delivered by the Panamera Turbo. The torque is also increased over the Turbo from 516 lb-ft to 553 lb-ft. In the “Sport” and “Sport Plus” mode of the standard Sport Chrono Package Turbo, the overboost function can temporarily generate additional torque with a peak rating of 590 lb.-ft.

The power increase delivered in the Panamera Turbo S can be attributed to two main enhancements: new twin turbochargers with titanium–aluminum turbines and a modified engine control. Titanium–aluminum reduces the turbine and compressor wheel’s weight, which results in a quicker turbo response that improves the engine’s agility.

The formidable powerplant that lies beneath the hood of the Panamera Turbo S is capable of propelling it to sports-car sprint times. With the help of Launch Control, the newest Panamera can reach 60 mph in just 3.6 seconds. The top track speed is 190 mph. And despite this increased performance, fuel consumption is expected to remain comparable to the Panamera Turbo that delivers an EPA estimated rating of 15 mpg city/23 mpg highway (18 mpg combined). Official EPA fuel economy estimates for the Panamera Turbo S will be available when the car goes on sale in North America.

Even for a world-class luxury car, the Panamera Turbo S boasts an extraordinarily high level of comprehensive features. In keeping with its sporty concept, it comes equipped with the most important driving-dynamic control systems. For example, Porsche Dynamic Chassis Control (PDCC) is an active anti-roll system that significantly reduces lateral body movement during corning, which enhances stability, handling and overall occupant comfort. Porsche Torque Vectoring Plus (PTV Plus) is also standard and works to help ensure superior traction and higher-performance cornering by applying a variable torque split to the rear wheels in combination with an electronically controlled rear differential lock. Also standard is Porsche’s advanced speed-sensitive Servotronic steering system, a sports exhaust system, and the Sport Chrono Package Turbo that further tunes the engine and suspension at the touch of the “Sport Plus” button.

While the sporting character of the new Panamera Turbo S is most apparent behind the wheel, the car’s exterior tastefully exudes its high-performance ambitions. The new 20-inch Turbo II wheels with increased rear axle track width, side skirts from the Porsche Exclusive range and the adaptive four-way extending rear spoiler express the car’s elite performance abilities. Inside, the fusion of exclusivity and sportiness is conveyed in the interior by the standard bi-color leather finish. A new combination of black/cream is offered exclusively for the new Panamera Turbo S with Agate Grey/cream also being added as an exclusive option later this year. Agate Gray Metallic will also be an exclusive exterior color.

The new Porsche Panamera Turbo S will go on sale in the U.S. later this spring, and will have a base MSRP of $173,200, excluding $975 for delivery and destination.