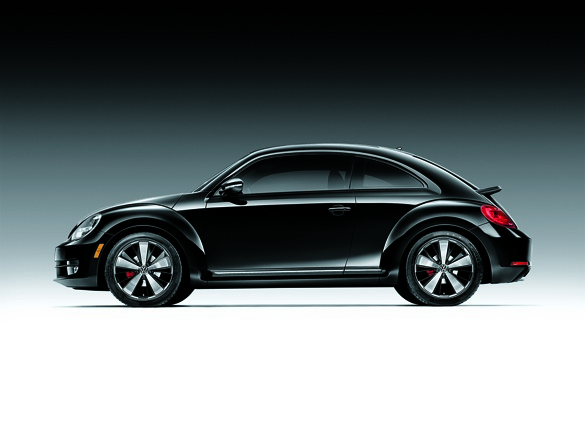 Like the retro shape of the newly redesigned VW Beetle? Chances are good you’ll like the pricing as well, since the new car starts off just a few hundred dollars more than the car it replaces. Starting price on a 2010 VW Beetle was $18,690, while the starting price for the 2012 Beetle gets a bump to $18,995. There’s a variety of Beetle models to choose from as well, starting with the aforementioned $18,995 2.5L, which gets you VW’s 2.5-liter, five-cylinder engine (good for 170 horsepower), a five-speed manual transmission, 17 inch alloy wheels, a leather-wrapped steering wheel and an eight-speaker audio system with an aux-in for portable music players.

For those of us who like to drive, VW is offering up the 2.0L TSI at a starting price of $23,395. That gets you a turbocharged 2.0-liter four-cylinder engine, good for 200 horsepower, hooked to a six-speed manual transmission. If you prefer the convenience of an automatic but still like to drive, VW’s DSG dual-clutch “manual automatic” transmission is an available option. In addition to the standard features of the 2.5L, the 2.0L TSI gives you Bluetooth connectivity, iPod connectivity, three-color ambient lighting, bigger brakes with painted calipers, sport seats, 18 inch alloy wheels, a rear spoiler, foglights, additional gauges and alloy pedals.

Later in the year, VW will introduce a TDI variant of the new Beetle. Pricing hasn’t been set for the TDI version just yet, but based on the price gap between the entry-level Jetta and its TDI counterpart, expect the TDI Beetle to start at around $25,995.

THE ICONIC VOLKWAGEN BEETLE HITS THE MARKET WITH A BASE PRICE OF JUST $18,995

Herndon, VA Volkswagen of America, Inc. today announced pricing for the 21st Century Beetle, the third generation of the classic people’s car. The new Beetle will start at just $18,995, offering an agile, driver-oriented coupe that respects the Beetle’s past yet looks to the future.

The 21st Century Beetle is an automotive icon reinvented, a nod to the heritage and character of Volkswagen and our remarkable history, said Jonathan Browning, President and CEO, Volkswagen Group of America, Inc. This new interpretation of the original Beetle holds true to the traditional spirit of the car, with all the benefits of modern technologies and efficiencies.

The 2.5L model, which has a starting MSRP of $18,995, has a 170-horsepower in-line five-cylinder engine and offers fuel economy that is improved by up to 10 percent over past 2.5L models. When outfitted with the five-speed manual transmission, the mileage is estimated at 22 mpg city and 31 mpg highway. The optional six-speed automatic offers EPA fuel economy ratings of 22 mpg city and 29 mpg highway.

The sportiest model the 2.0L TSI will have a starting MSRP of $23,395. This model uses Volkswagen’s critically acclaimed 2.0-liter in-line four-cylinder turbocharged engine that produces 200 horsepower and 207 lb-ft of torque. As well as providing sparkling performance, the four-cylinder engine with automatic transmission offers an EPA fuel economy rating of 30 mpg on the highway and 22 mpg city.

The 2.0L has a standard six-speed manual transmission, with the option of Volkswagen’s DSG© dual-clutch automatic transmission. It takes the standard equipment found on the 2.5L and adds Bluetooth® technology, iPod® connectivity, three-color ambient lighting, larger brakes with red calipers, a kaeferfach additional glovebox that is similar to that of the original Beetle, sport seating surfaces, 18-inch alloy wheels, a rear spoiler, foglights, three additional gauges on the dashboard, and alloy pedals.

In 2012, a TDI Clean Diesel model will become available, powered by Volkswagen’s highly efficient 2.0-liter turbocharged four-cylinder diesel engine that produces 140 horsepower and 236 lb-ft of torque. This will be the most fuel-efficient Beetle ever, with an expected highway estimate of 40 mpg.

The 2012 Beetle features sportier, more dynamic, and bolder styling than the previous model. It is also 3.3 inches wider, 6.0 inches longer, and 0.5 inches lower, giving the car a more muscular appearance that has a broad appeal. The Beetle will be available in three trim lines, some of which include the transparent, panoramic tilt/slide glass sunroof that is 80 percent longer than on the previous model.

The Beetle comes standard with the RCD 310 sound system with eight speakers; an optional premium VIII audio system features a CD changer, interface for SD cards, and a touchscreen. The Beetle will also offer concert-quality sound with an available Fender® Premium Audio System, designed exclusively for Volkswagen. In a partnership that combines quality automotive engineering and quality sound engineering, Volkswagen and Fender have teamed up to bring the raw emotion of live music to the driving experience.

The Beetle includes Volkswagen’s advanced Intelligent Crash Response System that shuts off the fuel pump, unlocks the doors, and switches on the hazard lights if the car is involved in some types of collisions. The Beetle is also covered under the no-charge, 3-year/36,000-mile scheduled Carefree Maintenance® Program.

About Volkswagen of America, Inc.

Founded in 1955, Volkswagen of America, Inc. is headquartered in Herndon, Virginia. It is a subsidiary of Volkswagen AG, headquartered in Wolfsburg, Germany. Volkswagen is one of the world’s largest producers of passenger cars and Europe’s largest automaker. Volkswagen sells the Eos, Golf, GTI, Jetta, Jetta SportWagen, Passat, CC, Tiguan, Touareg and Routan through approximately 600 independent U.S. dealers. All 2011 Volkswagen models come standard-equipped with Electronic Stability Control. This is important because the National Highway Traffic Safety Administration (NHTSA) has called ESC the most effective new vehicle safety technology since the safety belt. Visit Volkswagen of America online at www.vw.com or media.vw.com to learn more.