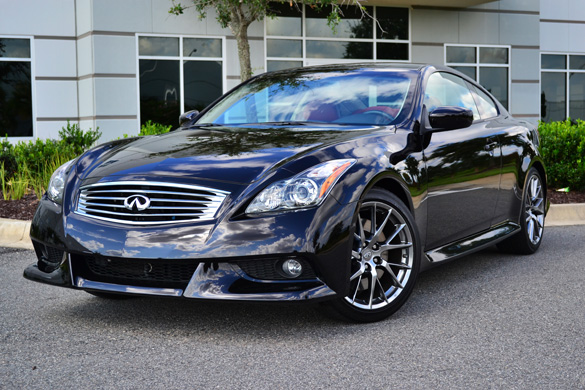 The new 2011 Infiniti G37 IPL is a one-of-a-kind vehicle highlighting Infiniti’s inspired performance. The new G37 IPL does not aim to directly compete with Benz AMG or BMW Motorsport. It does however offer a little something extra for those enthusiasts who are on the fence when potentially considering a “step above the norm” when it comes to a luxury-sports coupe. 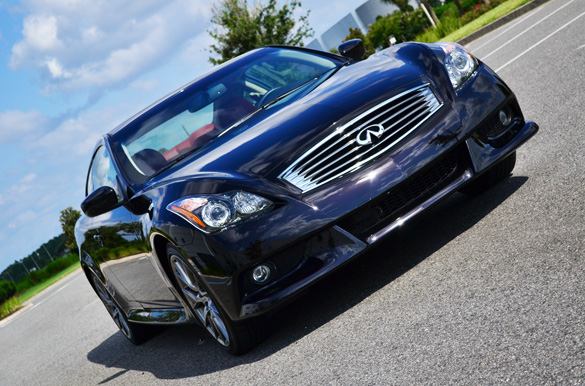 When I first accepted the delivery of the new 2011 Infiniti G37 IPL coupe I was skeptical at first  wondering if the IPL edition would be much of a difference from a normal G37 Journey with a sports package. After just the first day in the G37 IPL coupe I was convinced that Infiniti not only added stylish body fascias, but they gave it more power via a retuned ECU and dual exhaust system (18 horsepower & 6 ft lbs. of torque more than stock for a total of 348 horsepower and 276 ft lbs.), dark-finished 19-inch wheels wrapped in Bridgestone Potenza RE050A rubber, red-stitched leather appointed seats and IPL badges on the rear and engine cover. 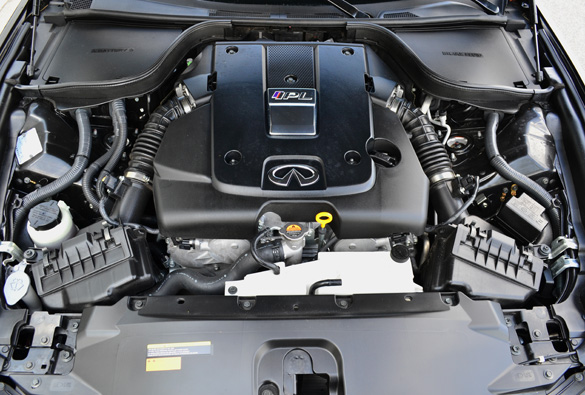 The new G37 IPL coupe is all about vehicle enhancement instead of being a road-hog demon with its crosshairs on the linking’s of Benz AMG, BMW Motorsport, Cadillac CTS-V or even Audi’s S line. The G37 IPL is on more of a level playing field with a BMW 335i or maybe the new Benz C 350 coupe. Driving the new G37 IPL coupe adds a bit of lively excitement. With a little extra power and deeper exhaust tone adding a considerable amount of drone when cruising around town. The looks help a bit also as heads turn recognizing that this G is not your ordinary Journey and Sports package equipped G37 coupe.

Adding just 18 horsepower and 6 ft. lbs. of torque to the G37 coupe equation should be just what some G37 enthusiasts have been craving without going to aftermarket bolt-ons. You even get a nice set of dark-finished wheels and a more aggressive suspension setup. 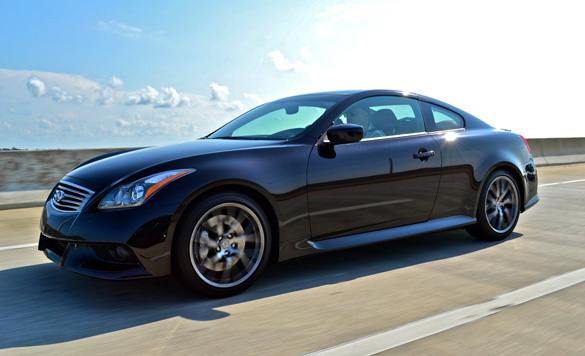 The all-new 2011 Infiniti G37 IPL coupe performed slightly better than any G37 coupe I have driven. I noticed that the handling dynamics are bit crisper while the added power lets the quick yet smooth-shifting 7-speed automatic bang through the gears just at red-line. Not to mention, you can put the auto box into sport mode and bang through the gears yourself through the magnesium coated paddle shifters mounted on the steering column. The new G37 IPL coupe can be had with a wonderful short shifting 6-speed manual transmission, same as found in the normal G37 coupe or sedan.

Having driven the Nissan Nismo 370Z previously it is easy to say that the G37 IPL coupe is a plush version of the Z in a way. They both share the same wonderful FM (front-midship) platform and VQ series 3.7-liter V6 engine. For EPA gas mileage figures, the new G37 IPL coupe manages to get a decent 19 mpg city and 27 mpg highway. During my drive around town, mostly city driving, my best was about 22 mpg. My short highway commute on average came in around 26 mpg, not too bad for Infiniti’s first “performance line” car. 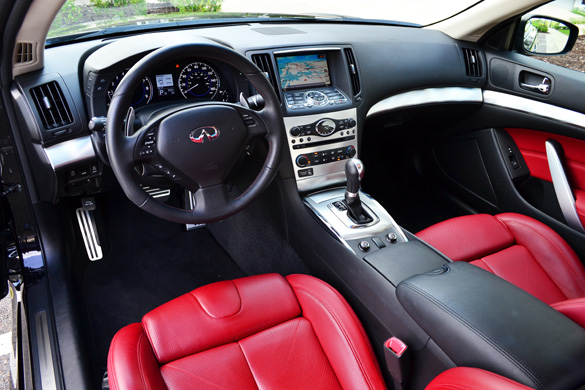 There is not much of a difference in the normal G37 coupe interior trim vs. the trim inside the G37 IPL coupe.  My test vehicle’s Monaco red leather seats really added to the G37 IPL’s luxury and sports appeal. The seating surfaces are comfy and the front buckets provide just enough lateral support when putting the G37 IPL into the turns. 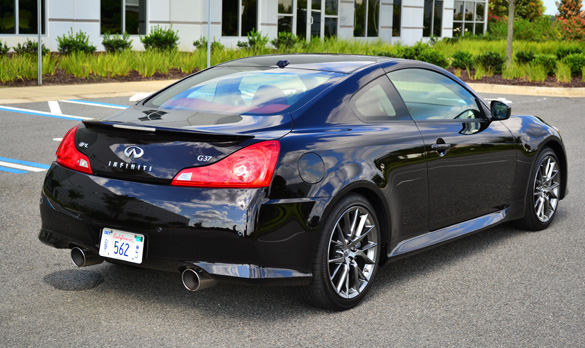 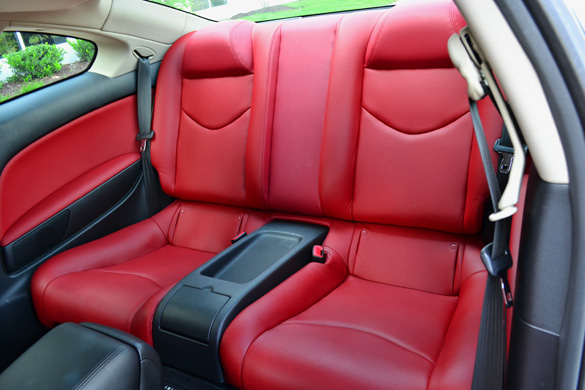 Rear seating, just as in any other G37 coupe, is usable in the G37 IPL but the two occupants must not be anywhere near 6 feet tall or they could be asking for trouble in the legroom department. Aside from the rear seats, driver and passenger can find the optimal seating position ready to take on long journeys without discomfort. Visibility may be a slight task when checking your blind spot but the G37 has proven to be a big improvement over the 370Z for obvious reasons.

The exterior color of my 2011 Infiniti G37 IPL coupe, Malbec Black, is stunning. The color, depending on the way the sunlight hits the surface, appears to have a purple tint with a high-gloss clear coat. If the IPL styling does not get your attention at first glance, the Malbec Black color will do it. 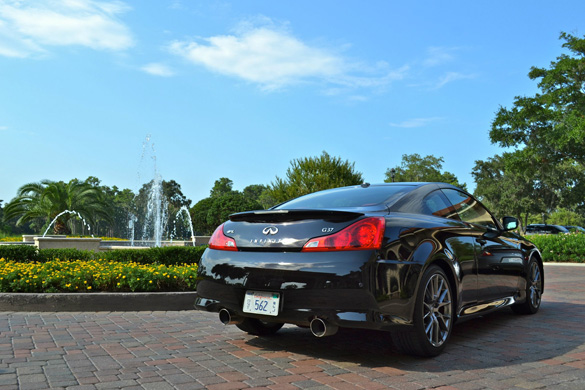 In the task of Infiniti finding a starting point for a new performance line of cars, the new 2011 G37 IPL coupe is the ideal choice. If any car can gain some winning performance brand recognition for Nissan’s luxury division, it is the new G37 IPL coupe.

The all-new 2011 Infiniti G37 IPL coupe has a long list of standard features that are typically part of optional packages on the normal G37 coupe. The only option on my G37 IPL coupe test vehicle was R Spec high friction brake pads ($370 option) bringing the price to $51,095. The G37 IPL coupe’s price point, considering all of the standard features, is slightly lower than comparably configured vehicles in the same class from BMW, Mercedes-Benz and Audi. If you have already made the choice to load your new G coupe up to the gills, purchasing a new 2011 G37 coupe IPL version is the way you’d want to go. A huge benefit to it all, you will be driving the precursor to many new exciting Infiniti Performance Line vehicles to come. 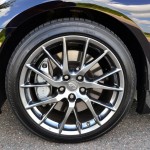