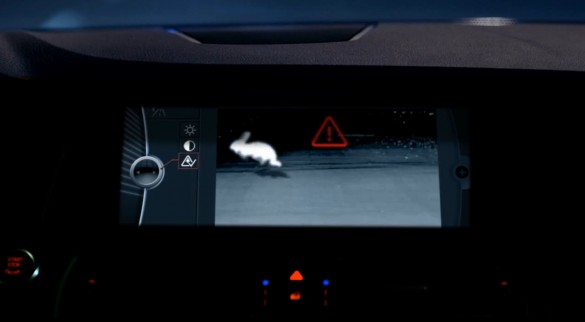 If you ever have an opportunity to lap a racetrack in the dark, do it, but only if you know the track very, very well. One of the first things you’ll learn is that headlights, even HID lights, don’t provide enough coverage to deal with the speeds modern cars are capable of. If you can’t see a corner entry or a braking marker at high speed, what are the chances you’ll be able to spot a deer or pedestrian on a dark country road?

Assisted vision systems being developed by automakers like BMW won’t turn day into night, but they will help you spot people and animals at further distances than even high-beam headlights. Most work via thermal imaging, detecting objects that are warmer than the ambient background temperature.

BMW’s website lists the effective range of its Night Vision system as between 15 and 100 meters, which is roughly 49 to 328 feet. At sixty miles per hour, you’re traveling at 88 feet per second; in other words, the system will give you between a half-second warning and a 3.7 second warning, which really isn’t a lot of time.

The video, however, quotes the range as 900 feet, which would give a driver over 10 seconds to react at 60 mph. We’re not sure which set of numbers is correct, and we hope we don’t find out the hard way. Still, if you live in deer country, BMW’s Night Vision (part of its Connected Drive technology suite) is one more tool to keep you from meeting Bambi up close and personal.