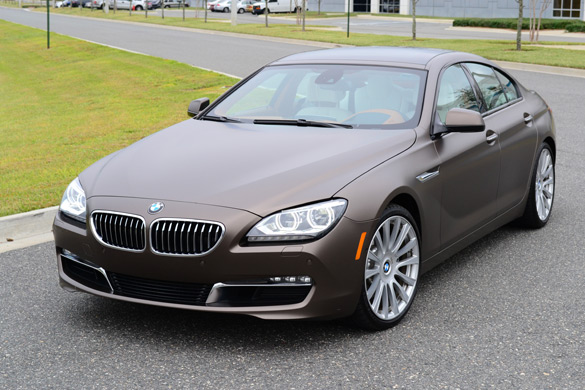 It is somewhat of a surprise to just now see BMW, known for being a benchmark-setter in the automotive world, finally arrive at the 4-door coupe game with the all-new 640i Gran Coupe. As a late entry into the game placed in the same segment as the Benz CLS, Audi A7 and even the Porsche Panamera, the new 2013 BMW 640i comes well-prepared and eager to compete until the conclusion of such a specialized venue.

Sometime back in the early 2000’s automakers felt the need to put forth their artistic abilities to give the dedicated sports coupe enthusiast a little something extra complete with 4 doors but retaining the silhouette roof line of their prided coupes. To start things off fresh, Mercedes-Benz paved the way with the CLS, VW landed the CC, Audi the A7, and now BMW has a starting freshman wearing the 6-series badging. 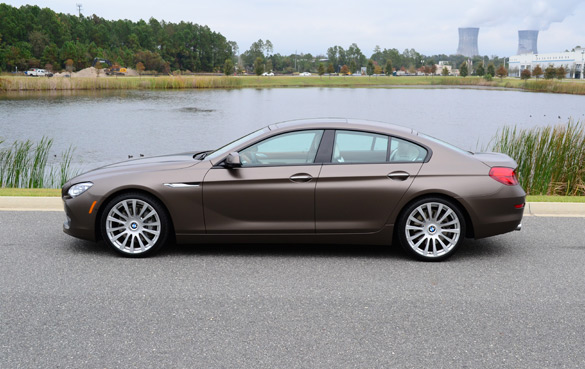 Having slightly larger dimensions than its coupe sibling, the 640i Gran Coupe handles itself as a well-balanced luxury sports sedan. The 640i Gran Coupe, sharing most of its front and rear fascia styling with the 6 Series Coupe, has a wheelbase about 4.5 inches longer than the coupe yet wider and slightly lower. The new design language and extra seating give the Gran Coupe much more versatility.

Driving the new 2013 BMW 640i Gran Coupe is a pleasure in itself. The inline 3.0-liter inline-6 cylinder engine force-fed by a twin-scroll turbocharger is a variation found in many other BMW vehicles. Power output is 315 horsepower at 5,800 rpm and 330 ft-lbs of torque at a seriously low 1,300 rpm. I can contest to the almost-instant torque delivery as acceleration almost matches that of a naturally aspirated V8 engine from a dead stop. Power is delivered through a new 8-speed automatic transmission, which shifts as smoothly as the turbocharged inline-6 cylinder engine delivers power. 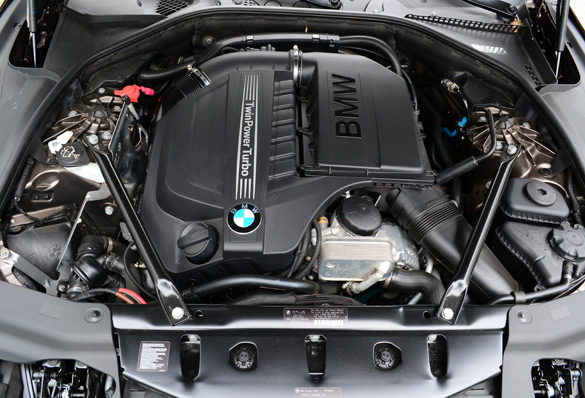 The new 8-speed automatic box dials in the optimal gear selection with a slight learning curve. A new customizable Eco Pro mode, one of the five chassis and drivetrain settings, starts the vehicle off in 2nd gear while making early shifts to take advantage of the low-end torque to optimize fuel economy. Comfort and Comfort Plus chassis modes, placing the active dampers in their most conservative setting, smooth out the ride while placing the transmission into a more subdued shift program. Sport mode, configurable from the iDrive menu set, allows the driver to dial in a firmer suspension setting and a more aggressive engine and transmission management. A non-configurable Sport+ mode advances the throttle response, power steering boost assistance, dampers, transmission shift characteristics, and if equipped, roll stabilization and Integral Active Steering.

The 8-speed automatic transmission does, however, have a slight delay when a much higher gear is demanded from abrupt gas pedal input. Though, the slight hesitation is followed through by the correct and optimal gear selection each and every time. 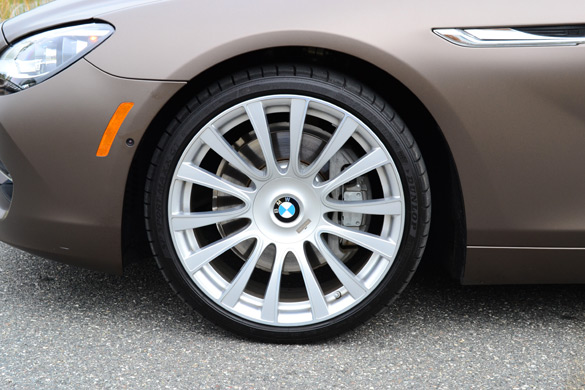 The relatively light weight aluminum chassis hardly transmits any type of noticeable flex or lack of rigidity. The handling attributes for the new 640i Gran Coupe are among the best for a luxury sports sedan sporting 6-cylinders. The large but optional staggered 20-inch wheels shod in 245/35ZR20 inch front and 275/30ZR20 inch Dunlop Sport Maxx GT performance tires, allow the Gran Coupe to hug the road without much harshness transmitted to the cabin. The optional Integral Active Steering, equipped on my test vehicle, dynamically changes the turn-in making parking and twisty roads a welcomed feat. The Integral Active Steering, combining the Active Steering system for the front and steerable rear wheels up to 2.5 degrees at certain speeds, precisely complements the front and rear angles for easy maneuvering. At highway speeds the rear wheels will turn within one degree to the same direction as the front wheels. At low speeds the rear wheels utilize the full 2.5 degrees to turn in the opposite direction of the front wheels giving you a virtual perception of a shortened or lengthened wheelbase – much like a 4-wheel steering system would do. 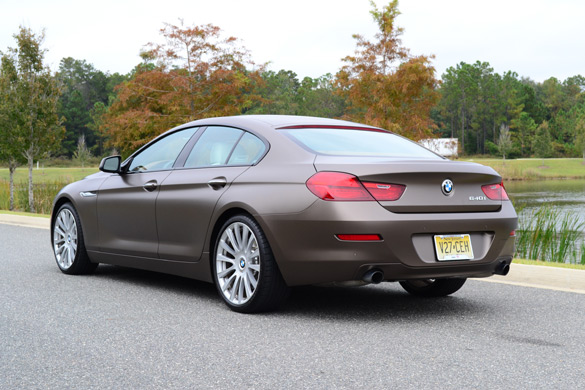 Driving feel transmitted through the steering wheel can be artificial at times, though the over-all experience still places the driver in a piston to read the road as you would in any other midsized BMW sedan. At times the 640i Gran Coupe feels smaller than it is even with a slight disconnect in the electric-boosted steering. Braking, through means of lightweight floating rotors all around and four-piston calipers up front and two-piston rear, do an admirable job to bring all 4,191 pounds to a stop.

The interior of the new BMW 640i Gran Coupe is a slight deportation from the normal world, which can be a good thing for some. My test car, being that it is loaded up with many BMW Individual program options, features a variety of premium and luxury package options,  such as White Ash Wood trim, a faux-suede headliner, unique cabin accents and upgraded Nappa leather with contrast stitching. Having the instrument panel, door trim and console fitted with the upgraded Napa leather, it completes the supple soft-ness of the Gran Coupe’s interior atmosphere. 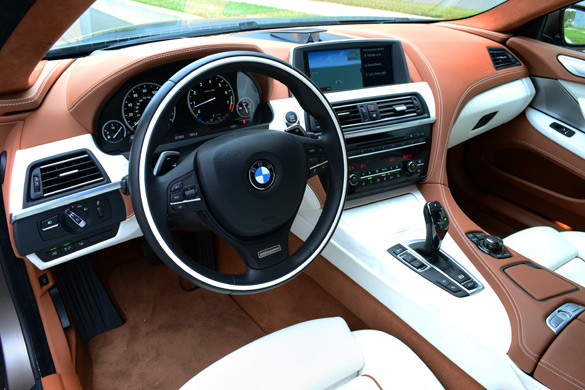 The seats offer up an individualized tailoring where high-quality materials lace the cabin throughout as a striking contrast. The signature BMW dashboard and layout of controls places just about everything in its proper expected position. The central instrument controls, containing the latest iDrive system and high-resolution wide-screen display, proves to be fast-reacting to inputs and somewhat user-friendly after taking time to become initially familiarized. In many ways BMW’s latest iDrive system gives the driver a more focused attention to the road when the centralized iDrive controller and buttons are in their expected positions, which eliminates the guessing game. 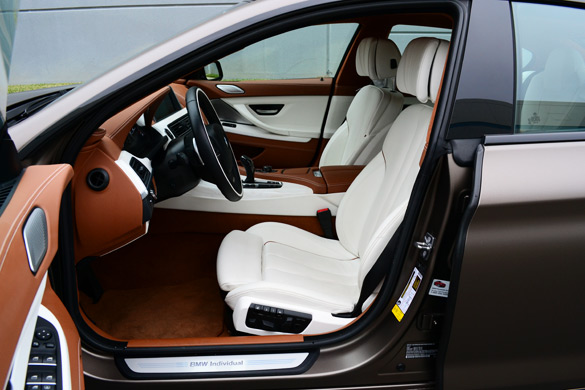 The Luxury Seating Package, also equipped on my 640i Gran Coupe test vehicle, adds active bucket sets, sunshades on both the rear side and rear windows and a four-zone climate control system. The additional two climate zones gives the rear passengers their own center console with proper ac/heater controls along with heated rear seats. 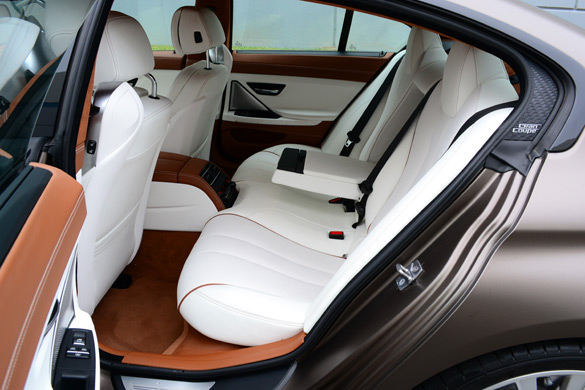 A new Bang & Olufsen audio system, with a motorized center channel speaker, literally sings high octaves to your heart’s content. The sound system is superb with crystal clear highs and supple lows thumping in a pleasing surround fashion. The over-all ambiance of the new Gran Coupe’s interior is truly a state-of-the-art luxury class, which is somewhat reflected in the additional options pricing.

A full array of LED lighting not only accents the plush interior of the Gran Coupe, but it provides exceptional visibility on the outside with a full set of adaptive LED headlights, fog lights, turn signals, tail lights and the signature BMW day-time running halo lights. If the LED lights do not grab the attention of onlookers, then the matte paint job – Frozen Bronze metallic, surly will. 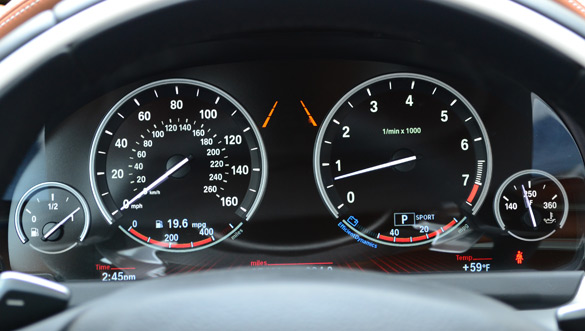 The new 2013 BMW 640i Gran Coupe may offer a bit more panache than its direct competitors but still carries a more driver-focused demeanor. While a long laundry list of options tacking on over $28,000 to the price tag, it can be viewed as an opportunistic venture for those with the means to obtain such a vehicle and all of the thrills it has to offer.  With BMW’s entry into the new coupe-styled sedan segment, it can leave the game winning or losing but always knowing it had the most fun.