Toyota’s paramount in the truck segment has been on a steady course for many years.  Now, with the introduction of the all-new 2014 Tundra, the expected ruggedness, packed set of available features and build quality from Toyota, takes the American brands head-on with a regained confidence.

The new 2014 Toyota Tundra receives a few updates to make its bold stance be better recognized in a highly competitive truck segment. The new 2014 Tundra retains much of its chiseled and boxed-off exterior sheet metal, which carries the hard-edged theme into its interior. The addition of daytime running LED lights and a slight re-sculpt of the grill and bumper areas up front define the major changes for the exterior. Additionally, the review camera now comes as standard equipment for the 2014 model year. Toyota’s Entune suite of apps within the infotainment system is also added to applicable trim levels. The 5.7-liter iForce V8 engine is carried over producing a healthy 381 horsepower at 5,600 rpm and 401 ft. lbs. of torque at 3,600 rpm. 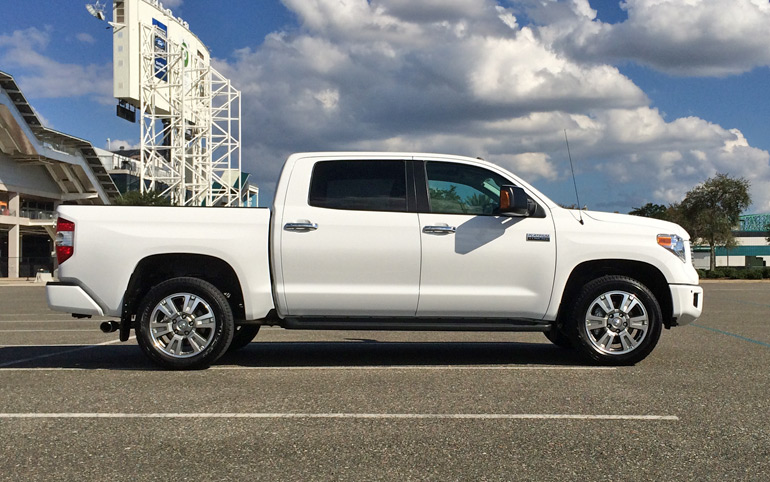 The Tundra CrewMax, basically a full-size double cab truck with seating for 5, is the largest variation of the Tundra line followed by a double cab featuring shorter rear doors and then the regular two-door cab. Trim levels start with the SR having a standard 4.0-liter V6 with 270 horsepower or the 4.6-liter V8 with 310 horsepower on either the SR or SR5 trims. From there, the 5.7-liter V8 can be had on all trim levels including the Limited and specialized Platinum and 1794 packages all receiving a 6-speed automatic transmission mated to the 5.7-liter V8. 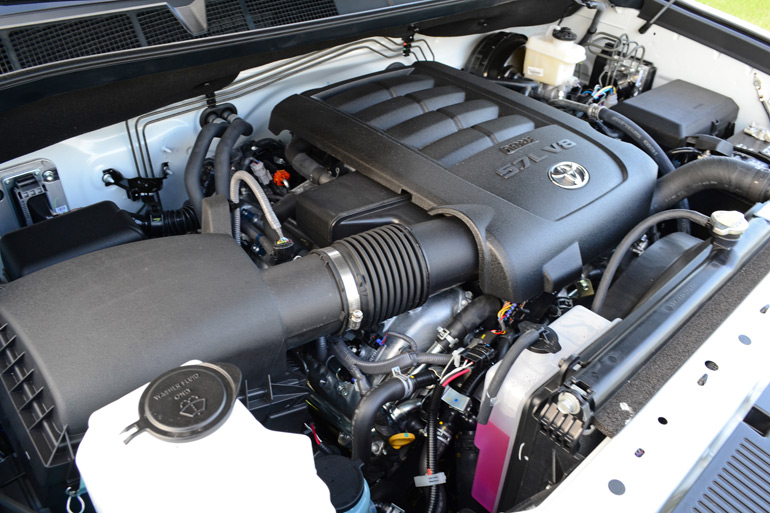 The large 5.7-liter V8 in my Tundra CrewMax Platinum retains its thirst for any grade of unleaded fuel you can throw at it. The looming lackluster fuel consumption numbers also remain, only getting 13 mpg city and 18 mpg highway for 4×2 5.7-liter V8 models. 4×4 models get the same city EPA estimate while the highway mileage drops 1 mpg to 17 mpg. The time in my 2014 Tundra CrewMax 4×2 Platinum test vehicle I saw a consistent 14.6 mpg around town and was able to get my best figure of 18.8 mpg on the highway. The highway fuel consumption saw its way to 17.4 mpg once you climb to 70 mph, all without carrying any load other than two passengers up front. 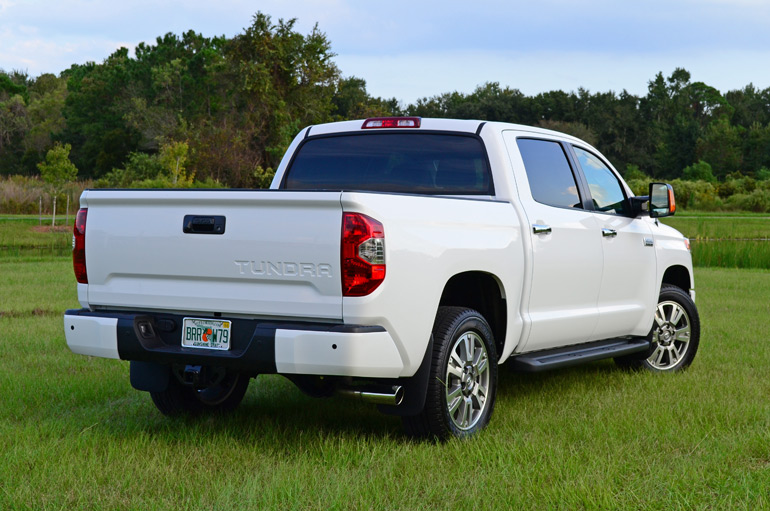 Mating the 5.7-liter V8 to a quick-shifting 6-speed automatic transmission makes the Tundra a capable towing truck. Combined with an automatically-engaged limited slip differential, the 4×2 and 4×4 Tundra models can tow with ease and navigate slippery trials without breaking a sweat. A dedicated tow/haul mode adapts the throttle input and transmission shifting points to compensate for an extra load out back by holding gears longer and advancing throttle position.

Of course with not-so-thrilling fuel consumption figures, the new 2014 Tundra is expected to lead the way with its towing and hauling abilities, and that it does. The new 2014 Tundra is rated to tow up to 10,400 pounds for all properly equipped 5.7-liter V8 trims. For protected storage space, the Tundra CrewMax allows you to stow away items in the rear seating areas after easily folding seat bottoms up. A new damped tailgate provides access to the rear 5.6 foot bed with the ability to haul just over 1,500 pounds. 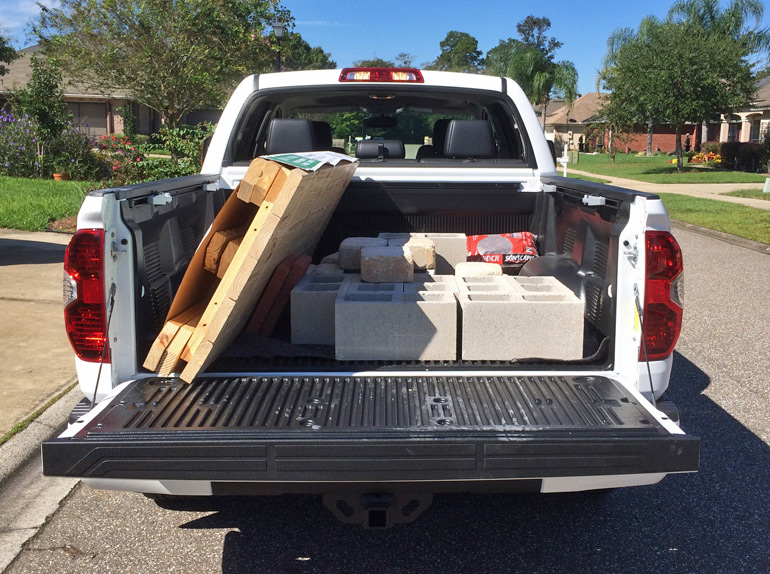 Driving the new 2014 Toyota Tundra is surprisingly simplistic, which is a good thing considering how trucks of this shear size are sometimes expected to drive, handle and operate like a bus. Basically, the new Tundra is easy to maneuver, park and has a good ride – with a dash of firmness to gently remind you that you are still driving a large truck. Even the steering angle makes turns an easy task much like a capable full-sized sedan. The slight firmness is what places its ride quality marginally below some of the new offerings from American competition in the truck segment. 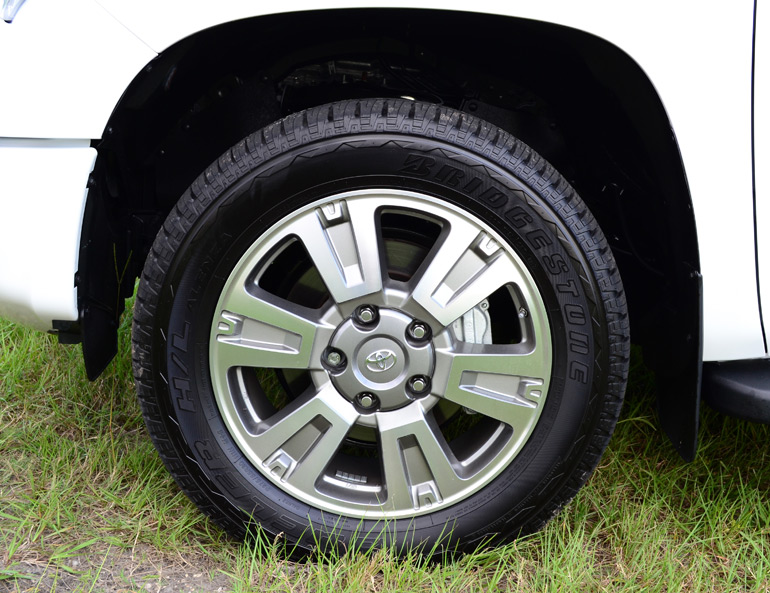 The new 2014 Tundra CrewMax 5.7-liter is a decent performer on pavement for a larger double-cab truck. 0-60 mph time comes in around 6.9 seconds, a reassuring trait of the Tundra’s road-going demeanor. The large 20-inch wheels and tires, part of the Platinum CrewMax trim’s standard features, aid to the Tundra’s latteral grip where the quick-acting traction and stability control doesn’t get overworked to keep things in line. 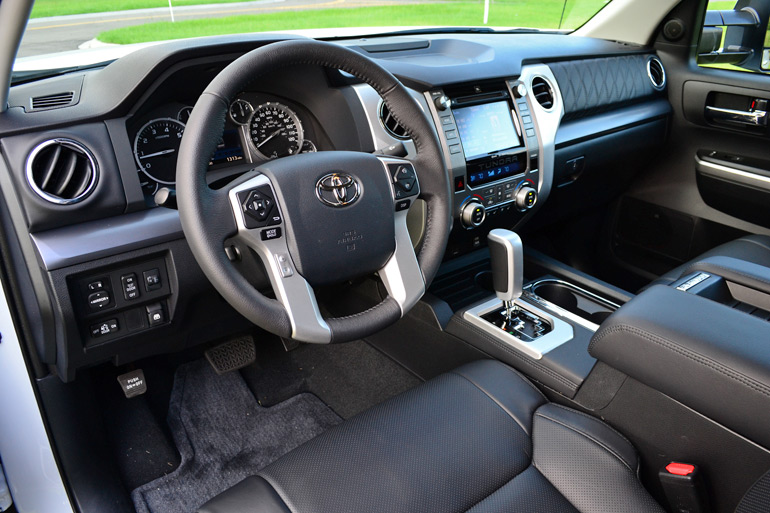 On the inside of the new 2014 Toyota Tundra CrewMax Platinum, comfort and abundant space is king, while much of the plastic surfaces, encompassing the majority of the interior except for the seats and floors, actually mesh well for the expected use that you get out of a truck of this magnitude. The abundance of plastics is an obvious visual characteristic of the Tundra’s dashboard and floorboard console areas. However, the use of the plastic materials never really sets off any cheap or compromising alarms. It proves to be useful for easily cleaning surfaces and long-lasting durability, especially for the rugged blue-collar type on those days where exploring the vast open grounds of American backcountry is expressed all over your clothing. 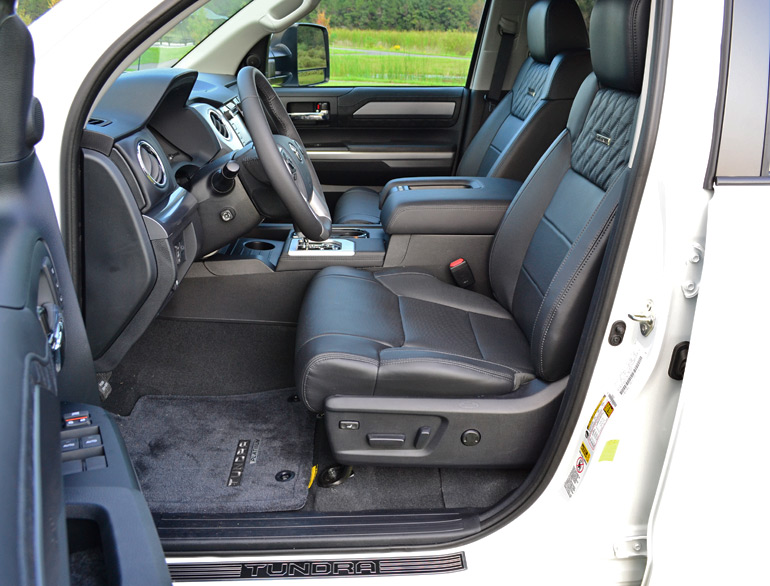 The new 2014 Toyota Tundra CrewMax Platinum, from its interior’s middle-grounded comfort level, attempts to please everyone and not just one side of life. The perforated leather seats with unique pattern stitching on the upper seat backs, as part of the upgraded Platinum package, adds a nice aesthetic and quality appearance to the cabin. The heated and ventilated front seats are a nice touch to the luxury side of things combined with a power telescoping steering column, power folding and heated outside mirrors, power sliding rear window, driver seat memory and upgraded 12-speaker JBL audio system with streaming Bluetooth audio. The controls are kept simple with large knobs and an easy-to-navigate infotainment system combining the GPS navigation, audio controls, Entune app suite, and a minimal amount of vehicle settings when properly paired to a smartphone via Bluetooth. Dual climate zones are added within the Tundra CrewMax Platinum trim level also. The gauge cluster has large dials and a color center LCD information screen toggled via steering wheel mounted buttons.  The options added to my Tundra CrewMax Platinum 4×2 were the larger heated tow review mirrors, which featured integrated amber LED turn signal and running lights, running boards, wheel locks, spare tire lock and a plastic bed liner. 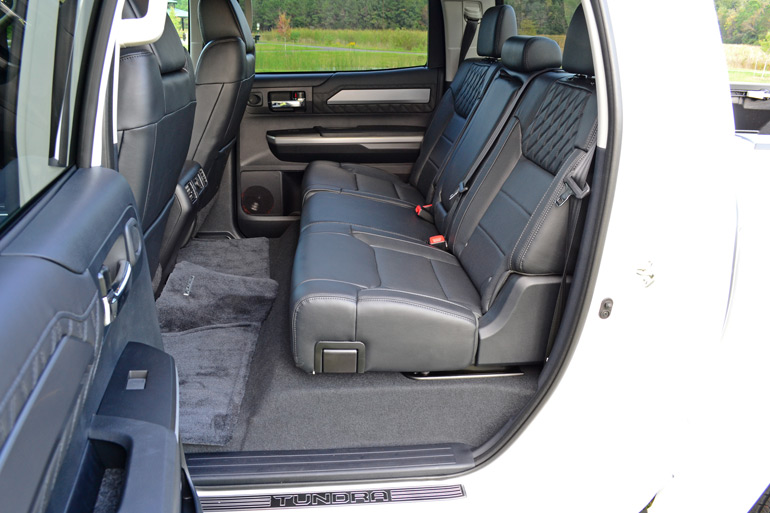 The main benefit of the new 2014 Toyota Tundra remains to be its value perception where the base pricing starts at just $27,563 for a regular cab SR time and just $36,940 for a Limited CrewMax 4×2. My 2014 Toyota Tundra CrewMax 4×2 Platinum, with all of the added features and Platinum package equipment, comes to an as-tested price of $45,794 including a $975 delivery and processing charge. Many comparably equipped trucks, such as the new Chevrolet Silverado 1500 DoubleCab will tip the price scale at $46,500 or higher, making the new Tundra an attractive buy without compromise in what defines a capable large double cab truck.