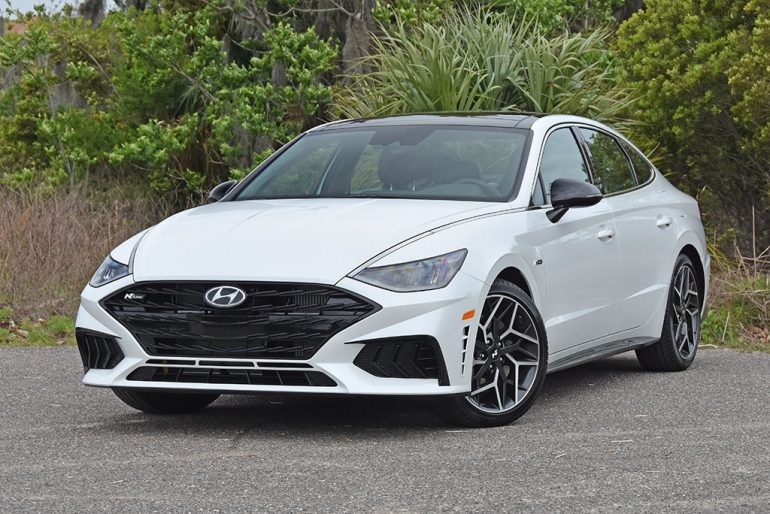 There’s only a handful of vehicles that keep the mainstream midsized sedan segment thriving with one of them being the Hyundai Sonata, which received a performance injection last year in the form of the Sonata N Line. This week, I had a chance to experience the 2022 Sonata N Line that touts a big jump in power over the rest of the Sonata lineup but has a couple of compromises in its equipment list to get that power bump.

In its seventh generation, the Hyundai Sonata is a competitive offering in a segment that’s often overshadowed by crossover utility vehicles today. However, the Sonata is one of the few vehicles to keep the midsized sedan segment alive, and now having an N Line trim the Sonata adds a little bit of fun and sports appeal to what is otherwise a vanilla experience in a nicely-appointed vehicle. 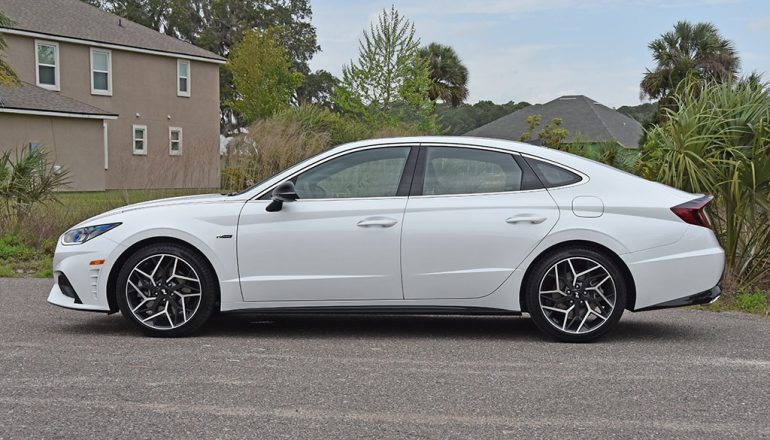 The new 2022 Hyundai Sonata N Line touts a huge power jump over the standard engine choices of a 2.5-liter naturally aspirated 4-cylinder engine with 191 horsepower/181 lb-ft of torque, or the 1.6-liter turbocharged engine in the upper level trims with 180 horsepower/195 lb-ft of torque. The Sonata N Line, which falls in line between the SEL Plus and Limited trim levels in terms of feature content, has the most powerful engine ever in a Sonata, a 2.5-liter turbocharged 4-cylinder with 290 horsepower and 311 lb-ft of torque. The unique powertrain of the Sonata N Line not only has upwards of 100 additional ponies but it gets mated to an 8-speed dual-clutch transmission for a more direct feel and snappy shifting only adding to the performance theme of such a vehicle. 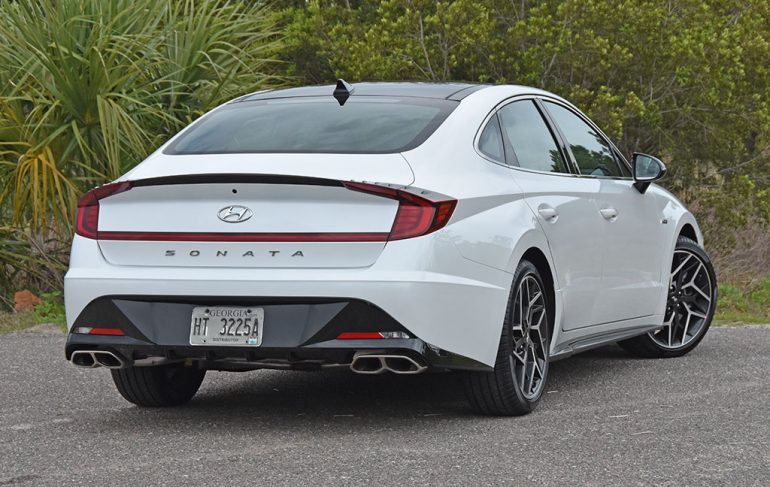 While the Sonata N Line is still front-wheel-drive, it has a more eager and sporty attitude over something like the Toyota Camry TRD V6 where the Sonata N Line feels lighter on its feet and the substantial torque gets things moving with more urgency. Zero to 60 mph comes about in just 5.3 seconds and the suspension setup using normal dampers is somewhat firm but helps to keep the Sonata planted and stable at higher speeds. The turn-in for the Sonata is sharper than the Camry TRD and feels overall more compliant even with a ride quality that’s a bit firm for some tastes at times. The Sonata N Line’s engine is smooth with its power delivery and doesn’t have much turbo lag from a stop, keeping vehicles like the Camry TRD and Honda Accord Sport 2.0 in its review mirrors. 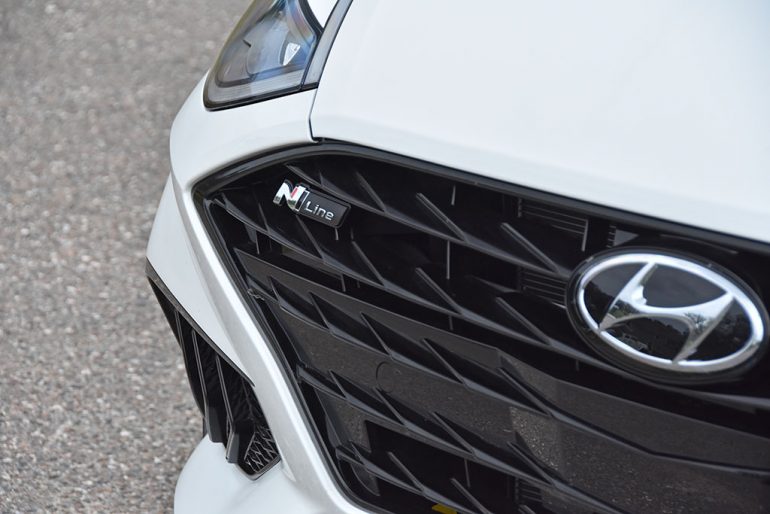 As far as the naming of the Sonata N Line, it appears to be a bit lost in translation as other Hyundai “N Line” vehicles don’t receive a huge power increase over the rest of the trim levels. Here, the Sonata N Line is closer to a full-on N vehicle from Hyundai instead of following the traditional “N Line” of others that mostly receive appearance packages. However, the Sonata N Line lacks the development to make it a full-on N vehicle because of some thermal limitations where it may not be able to withstand track duties. Actual Hyundai N vehicles like the Veloster N and Elantra N have a bit more put into them mechanically to withstand consistent hard runs as you would do on a track. Technically, the Sonata N Line is closely matched to its mechanically identical cousin, the latest Kia K5 GT, which feels almost the same in their driving dynamics and characteristics. They are both powerful and demanding front-wheel-drive midsize sedans, but the Kia K5 GT has a bit more sports appeal with its looks, in my opinion.

The Sonata N Line drinks a bit more fuel than all other trim levels, as you could imagine in having almost 300 horsepower and a more direct shift-happy 8-speed dual-clutch automated transmission. I saw no issues in nearly matching the EPA estimates for the Sonata N Line at 26 mpg city, 35 mpg highway, and 29 mpg combined. 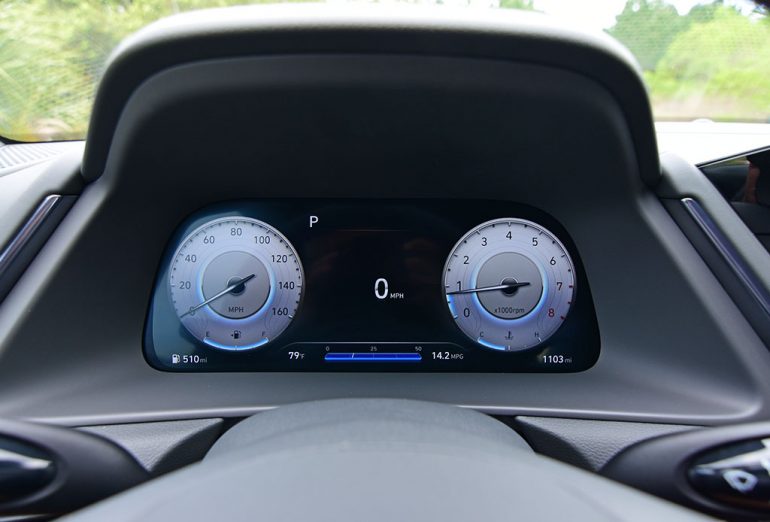 The Hyundai Sonata N Line does very little to look different from other Sonata trims and I would have hoped the brand would have done a little more. Though, you do get the large exclusive 19-inch wheels, a unique front grille, quad exhaust outlets, sporty seats with an embroidered “N” logo, and red accent stitching throughout the interior. 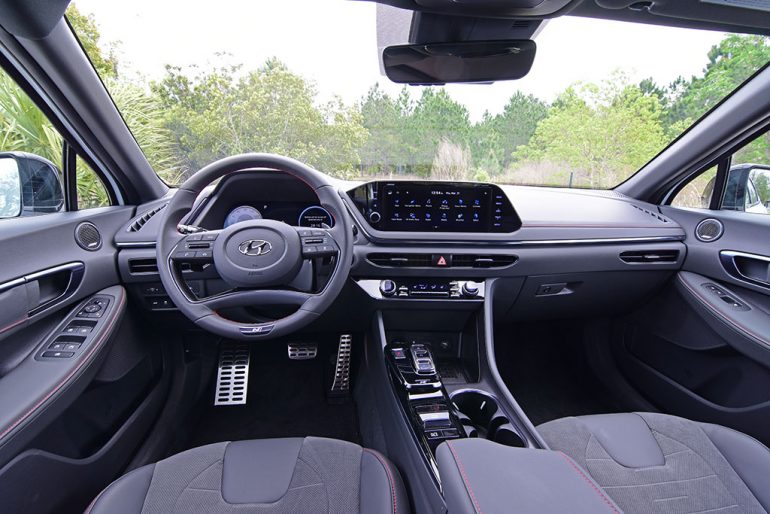 The interior of the Sonata N Line is most of what I’ve experienced in previous Sonata reviews apart from the seats and accented stitching. The other unique change in the N Line trim is the darkened transmission gear selector buttons, steering wheel shift paddles, and darkened trim that would otherwise be a flat silver color. Otherwise, there’s the same user-friendly 10.3-inch infotainment touchscreen and the integration of Apple CarPlay and Android Auto. 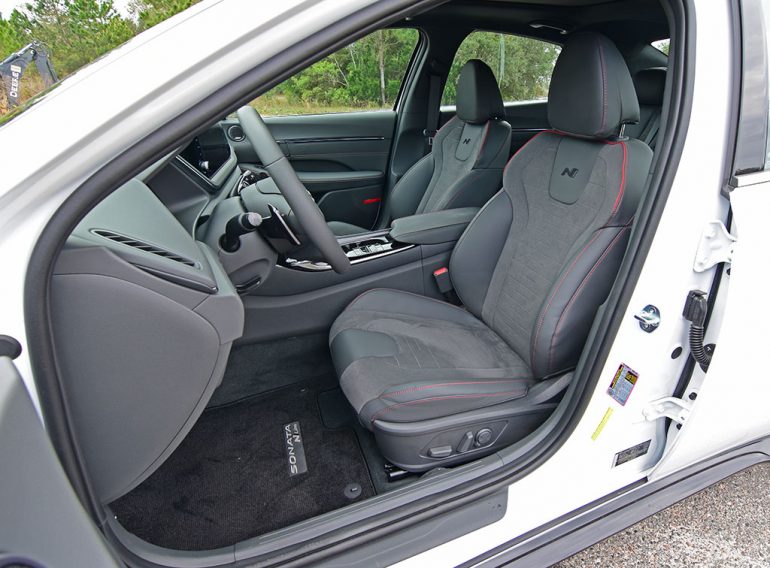 To keep the costs relatively low and slightly below the loaded Sonata Limited trim, the N Line trim features most of the content that you find on the SEL Plus trim, which includes the 12.3-inch digital gauge cluster and a full suite of active safety features that include adaptive cruise control. Features that I miss on the Sonata L-Line compared to the Limited trim are the surround-view 360-degree camera system, front ventilated seats, and the blind-spot view monitor that displays a live video of your blind spot in the gauge cluster when you signal. 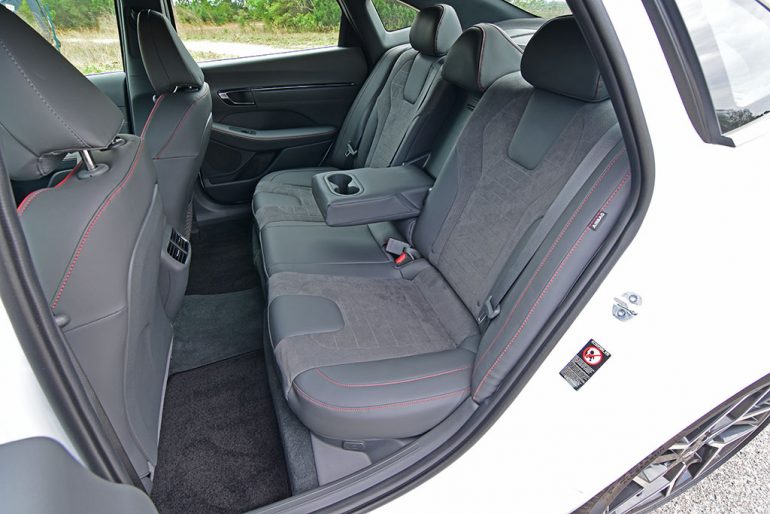 The 2022 Hyundai Sonata N Line is a good buy considering you still get some of the expected creature comforts of dual-zone automatic climate controls, a large touchscreen infotainment system with a 12-speaker premium Bose audio system, a digital gauge cluster, heated sports seats up front, power panoramic sunroof with power sunshade, and the added power under the hood. At the as-tested price of $34,645 the new Sonata N Line checks many desirable boxes for consumers plus it’s one of the quickest vehicles in its mainstream class.